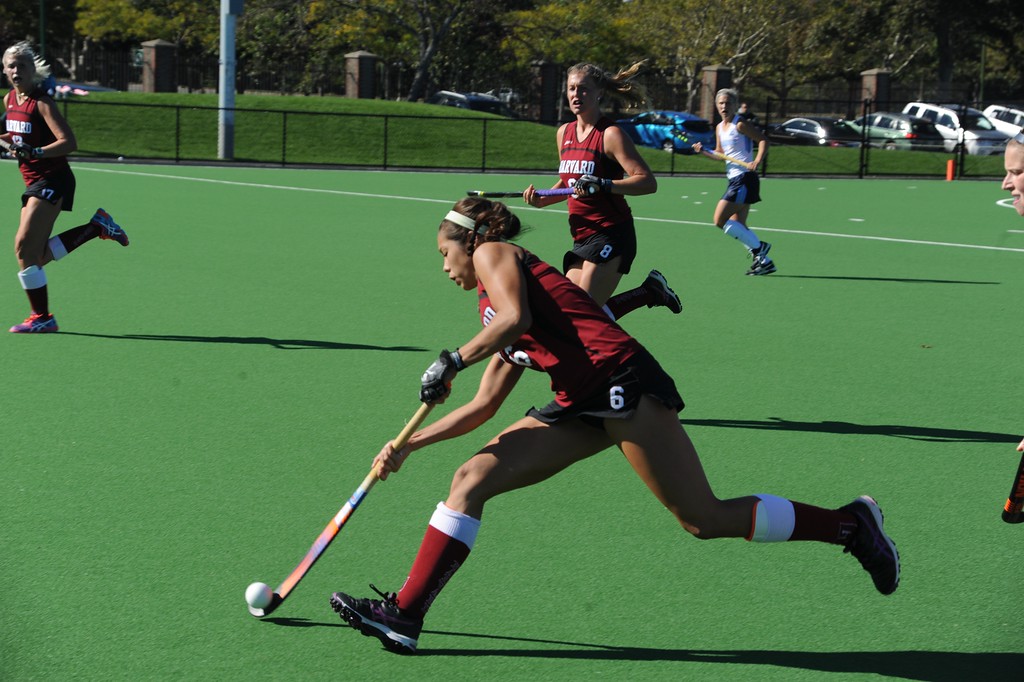 In a 5-0 shutout victory against Cornell, two goals and an assist from senior Marissa Balleza gave her the school record for both career goals and career points. By Matthew W DeShaw
By Sean B. Chanicka, Contributing Writer

It has been 18 years since a Harvard field hockey player last set school records in points and goals for her career. Judy Collins ’99 set the most recent records in 1998, tallying 102 points and 43 goals just before the close of the millennium.

It’s a considerable feat for an athlete to break one program record over the course of their career. For senior forward Marissa Balleza, her pursuits did not stop after one record.

Balleza’s first points came in the 35th minute, as she played a pass from the left side of the field into the center of the circle for junior forward Emily Ott, whose shot sailed past the goalie into the net.

Just one minute later, Balleza tied the goals record as her near post shot evaded the Cornell goalkeeper. In the 53rd minute, after converting a penalty stroke, the Severna Park, Maryland, native took sole possession of the goals and points records.

“My coach called me over to do the stroke and I was so nervous,” Balleza said. “When I went up to the stroke, my legs were shaking and I was thinking ‘I have to make this they’re giving me this opportunity.’ I don’t even know what I was thinking, I was just so nervous in that moment. And even afterwards my legs were shaking because I couldn’t believe I just did that.”

Balleza was also named co-Ivy League Player of the Week after her efforts Saturday, sharing the award with Princeton senior midfielder Cat Caro.

This is Balleza’s second time receiving the honor this season, and she is the fourth consecutive Crimson student-athlete to receive this honor. Her two goals Saturday gave her 10 for the season, second best in the Ancient Eight.

“Marissa is one of the best players,” co-captain Sarah Finnemore said. “She’s so thoughtful and one of the most reliable people on the team. She always comes through when you need her the most. She has a great shot, great stick skills, she’s a player we all really look up to.”

Balleza has been a picture of consistency for Harvard, as she has averaged at least nine goals and two assists while appearing in every game during her four seasons with the team. Senior year is proving to be a career year for Balleza, as she is projected to set career highs in goals, points, shots, and shot on goal percentage. She has played a monumental role in the Crimson’s strong season.

“I think our team has been doing really well and that’s reflected in our season so far,” Balleza said. “We’ve grown a lot as a program and as a team since my freshman year. What we’re really hoping for is to win Ivies, especially all the senior girls because it’s their last year and they want to go out strong, and eventually make the NCAA tournament; I think that’s our ultimate goal.”

The Crimson opened up the season on shaky footing, starting the season off with two wins in its first six games. But since then, the Crimson has responded by rattling off a six-game winning streak, including two victories over ranked opponents in Maine and Boston Univesity. Over this span, the team has outscored opponents 15-3. Balleza has led the offense during this stretch with six goals and two assists.

Balleza and the team will look to accomplish that first goal next weekend as they travel to New Jersey to face No.11 Princeton. This matchup is of note because both teams currently stand at 4-0 and are tied atop the Ivy League standings.

While Balleza just set the school record in points and assists against Cornell, her most crucial games this season may only now be approaching.­