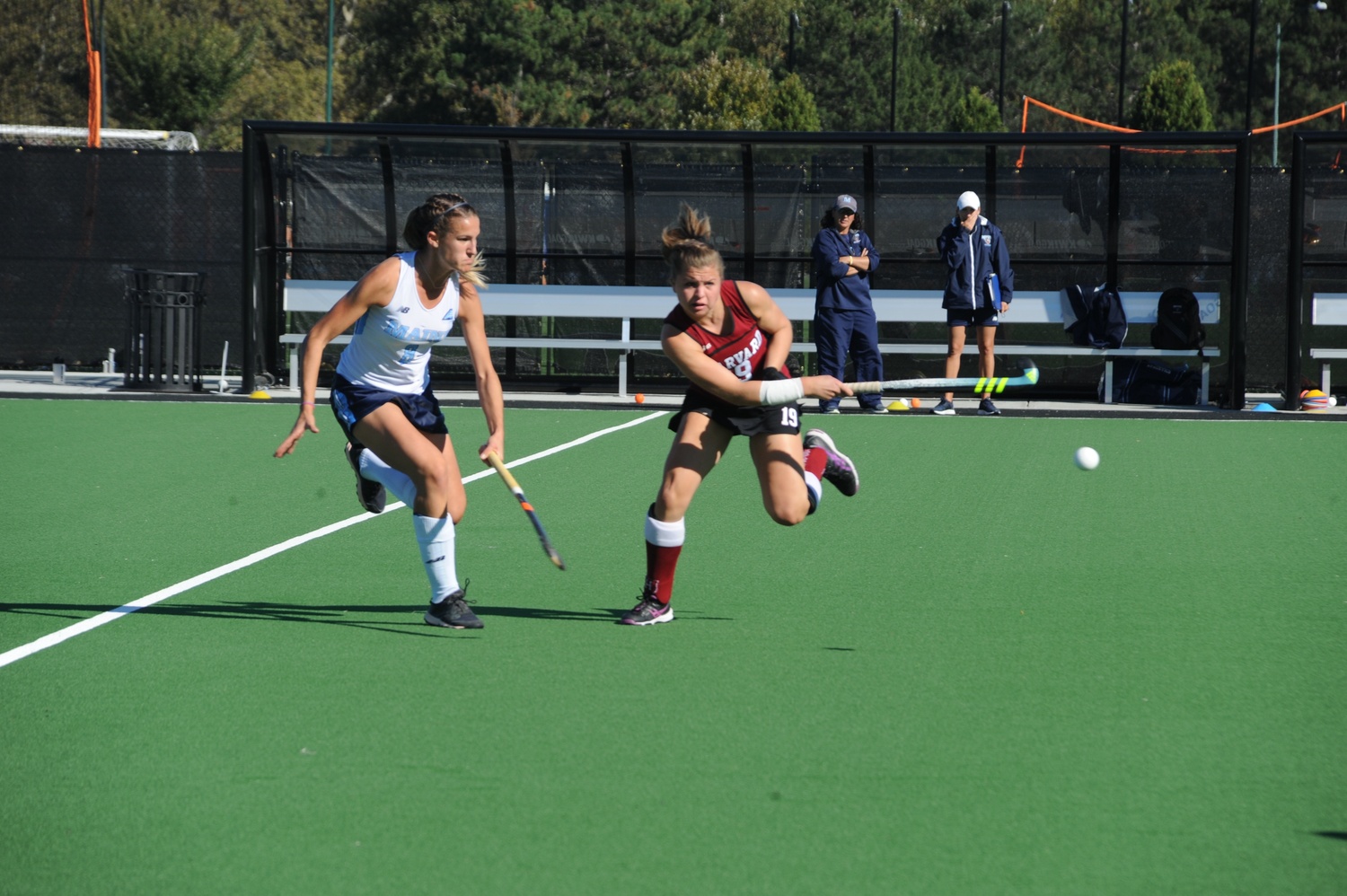 Kathleen Young scored two of the Crimson's three goals against Princeton on Saturday en route to the program's first win over the Tigers since 1994 By Matthew W DeShaw
By Sean B. Chanicka, Contributing Writer

­The No. 12 Harvard field hockey team’s biggest threat to winning the Ivy league this year came this past Saturday when the team traveled to New Jersey to face off with No. 10 Princeton.

The Tigers, coming off a 5-1 win against Brown the previous weekend, came into the matchup undefeated in its four games in conference play, tied with Harvard for the top spot.

Not only did the Tigers enter with momentum, but they were also entered with history on their side. Princeton had won the past 22 matchups between these two teams. Harvard hadn’t emerged victorious over the Tigers since the first term of the Bill Clinton administration.

The Crimson knew that someone needed to step up in a big way for the team to overcome such a challenge and stay atop the Ancient Eight standings.

It turns out that sophomore forward Kathleen Young was that someone.

In Harvard’s 3-2 overtime victory, Young scored twice, including the crucial winner in overtime. Her efforts helped end the Crimson’s 22-game losing streak against Princeton (9-6, 4-1 Ivy) as well as giving the team sole possession of first place in the Ivy League.

With the win, Harvard (9-4, 5-0) now has its longest win streak in program history, having posted seven consecutive victories.

“I think she is a phenomenal athlete,” Harvard coach Tjerk van Herwaarden said. “Her work-rate and speed have been a huge part of our offensive prep and our pressing, which has worked really well so far. She was able to get one goal earlier this season. It matters so much more that she did it against Princeton, who is one of our rivals.”

Senior Marissa Balleza opened the scoring for the Crimson the 13th minute. In the 27th minute, junior midfielder Ellie Cookson brought the ball into the circle and sent it towards the net.

As the ball bounced around in front of the net, Young gathered it and knocked it in for the score, her second of the season. Due to Balleza and Young’s efforts, Harvard went into the half with a 2-0 lead.

“The team was comfortable that we could compete with Princeton,” van Herwaarden said. “This team has set a goal for themselves to win the Ivy league and that’s the mission and we approach it on a game by game basis. I think we started really well and took a well deserved 2-0 lead.”

Despite the score at halftime, the Tigers rallied in the second half. Princeton senior attacker Cat Caro, the team’s leading scorer, scored twice, in the 45th and 64th minutes, to tie the game up.

With neither team able to score again in regulation, the game went into overtime.

After a long 70 minutes, during which momentum swung back and forth between them, both teams headed into overtime prepared for another grueling session. However, only 59 seconds into overtime, Young received a pass just to the right of the Tiger’s zone. Gathering the ball, she raced along the end line and tucked her shot just inside the near post for the winner.

“The team that comes back usually has the momentum in overtime,” van Herwaarden said. But we were able to get forward; and the goal setup was exactly as we discussed it. Kathleen’s phenomenal skills and speed allowed her to get past the defender and she kept herself calm and collected and was able to score the winner.”

After this weekend’s game against Princeton, the Crimson have two remaining games in Ivy league play: against Dartmouth and Columbia in the final week of the season.

Winning both of these games would seal Harvard’s first Ivy league title since 2004 and its fourth in program history. The team is glad to have Young on its side for these final games of its season.

“What we’re really hoping for is to win Ivies, especially all the senior girls because it’s their last year and they want go out strong,” Balleza said following Harvard’s win against Cornell last Saturday.

Now, because of Kathleen Young’s performance against the Tigers, that hope is still very much alive.