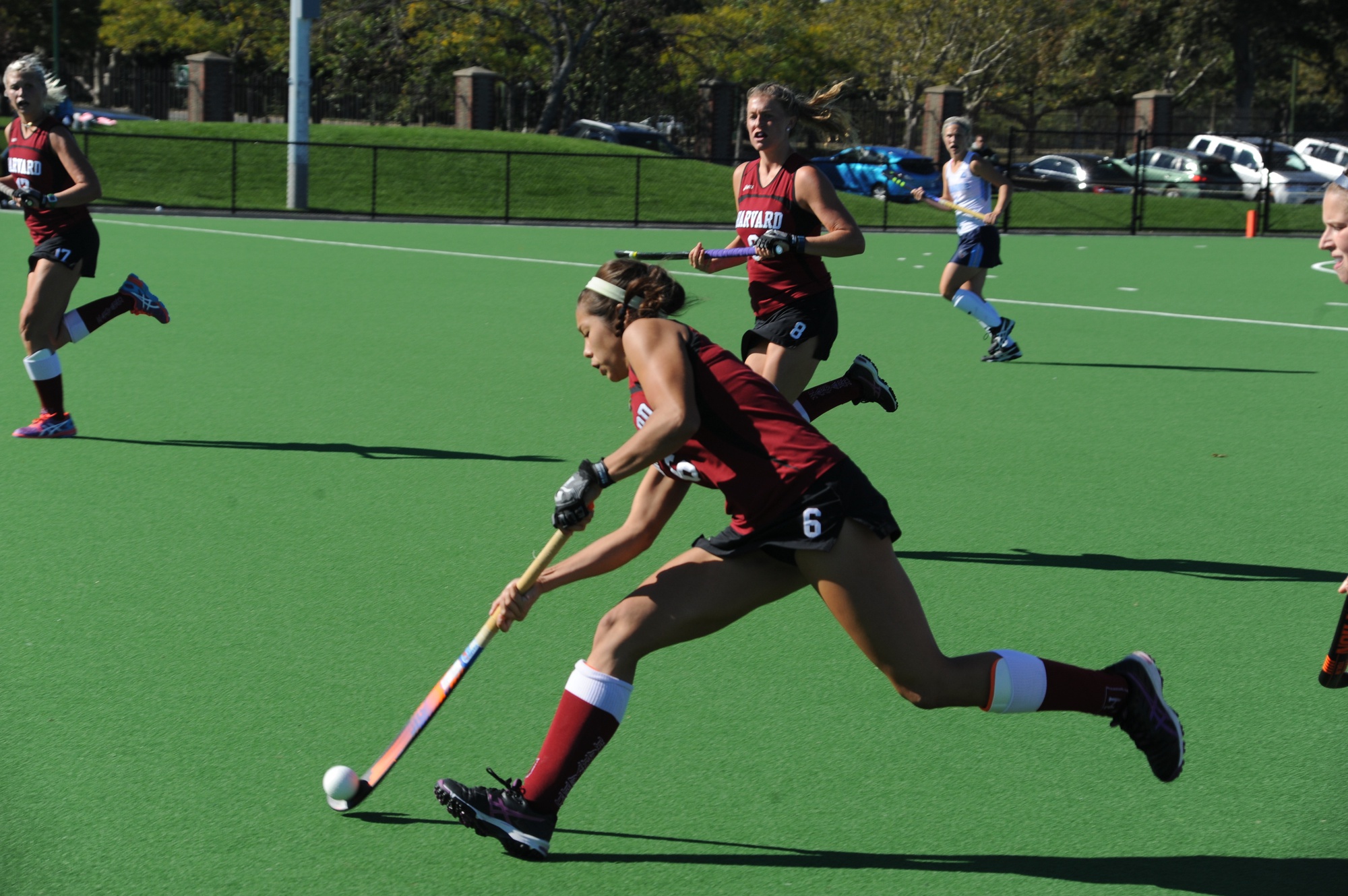 Honored before the game for breaking the school scoring record, senior Marissa Balleza could not get any offense going in a 4-1 loss to Boston College. By Matthew W DeShaw
By Amanda X. Fang, Crimson Staff Writer

Wearing pink warmups and pink shoelaces to commemorate Harvard’s annual Coaches vs. Cancer game, Harvard ended its eight-game winning streak with a loss to No. 12 Boston College on a rainy night on Berylson Field. The Crimson (10-5, 5-0 Ivy) was ranked four spots below the Eagles, and the game ended with Boston College (10-7, 3-3 ACC) claiming the victory at 4-1.

“I mean it’s always a little disappointing when you lose a game,” captain Kyla Cordrey said. “It ends our little winning streak we had, which is not the biggest of deals.”

The evening began by honoring senior Marissa Balleza, who broke program history for number of career points and goals scored three games ago against Cornell. She entered Thursday’s game with 47 career goals and 109 points. However, despite Balleza’s best efforts with three attempted shots during the match, she was unable to push for a Harvard victory.

Despite out-shooting the Eagles 17 to seven over the entirety of the game, the Crimson was unable to find the back of the net. The one successful Harvard opportunity came by the way of sophomore midfielder Victoria Boylett, who managed to convert a penalty corner in the last few minutes of the game. The goal was assisted by junior midfielder Ellie Cookson, who stopped the short corner and tapped it towards Boylett. The sophomore then proceeded to score her first ever career goal.

However, any hopes of a last-minute resurgence from the Crimson were dashed as the game ended two minutes after.

“I feel like we played very well in the game,” Cordrey said. “It’s just difficult because BC was able to capitalize on a few of our mistakes in the game, and we’ve been working on shortening those. But I think our team played really well in the second half. I just was very proud of how our team was working together – our press was working and it was just very exciting.”

On the other hand, the Eagles were low in shooting opportunities but had a high return rate on their attacking attempts. Twenty-five minutes into the first period, Boston College launched its first successful shot of the game. The Eagles proceeded to score again towards the end of the first period, leaving the score 2-0 at halftime.

“When [BC] scored, the momentum shifted and they started taking advantage of that in the second half of the first half,” sophomore midfielder Emily Duarte said. “But in the second half we came out and played much better, we had a lot of energy, [and] we just weren’t converting our chances. We had so many opportunities in the circle and a lot of shots on goal but we just couldn’t really execute anything and they were able to execute every chance on goal.”

The game also ended sophomore goalkeeper Libby Manela’s 8-0 streak. During the match against BC, Manela registered two saves but was unable to prevent the Eagles from scoring another two goals in the second period. Despite this loss, Manela maintains a lead in the Ivy League in terms of percentage of saves.

Harvard looks to return to Ivy League play next week with a game against Dartmouth. The Crimson boasts a clean winning record of 5-0 and is the only undefeated team in the league. On the other hand, the Big Green (3-10, 0-5 Ivy) has lost its past seven games and the past two games that it has played against Harvard.

“It’s pretty exciting that we’re 5-0 in the Ivies,” Cordrey said. “We had a very large win against Princeton this weekend. I don’t think we’ve beaten them in 22 or 23 years, so that’s just been a very high point in our season. But it means nothing really unless we can close out our last two Ivy games.”