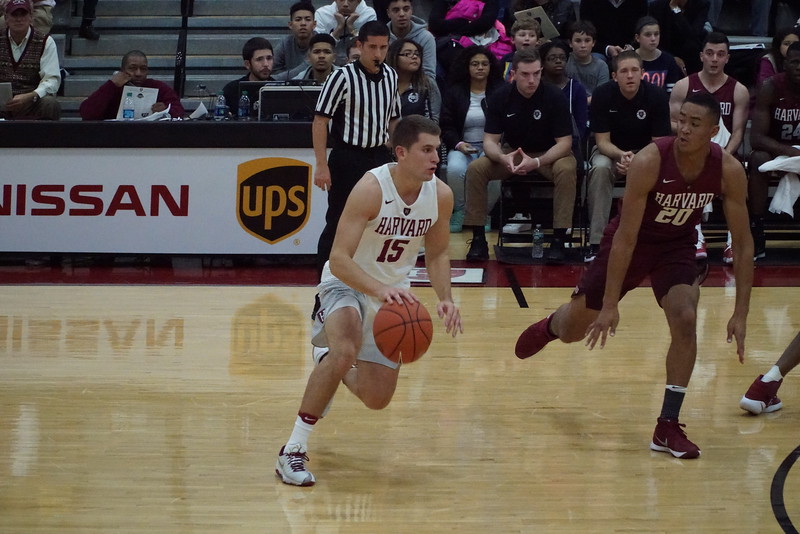 As one of the team's captains this year, Miller will provide depth to the line up.
By David Freed, Crimson Staff Writer

As the Crimson prepares to take on Stanford in its season opener, David Freed recaps the last season for each of the players on this year’s team and discusses the important season goals for each student-athlete. In this article, he discusses the recent progression and the relevant next steps for senior point guard Corbin Miller.

As one of the team's captains this year, Miller will provide depth to the line up. By Ryosuke Takashima

Miller took a couple of small steps forward in 2015-2016, shifting into more of a point guard role for the Crimson. As a sophomore, Miller played more two than one next to Chambers and Wesley Saunders '15, ball-dominant guards that were both more effective at creating offense off the dribble. As the team's second-best shooter his sophomore campaign, Miller was relied upon to space the floor more than anything else.

With Saunders graduating and Chambers sitting out the year with an injury, the team's guard situation looked very different the following year. Miller was the oldest point guard on the roster and became the team's secondary option at the point. He became more of a playmaker, dishing out more than twice as many assists as the previous season, and an effective floor-spacer, shooting 37 percent on nearly five attempts a game and showing a more effective off-the-dribble jumper than a year before.

Miller's role waned as the year went on and starter Tommy McCarthy improved, however. His best game of the season came in December, when he poured in 17 points on eight shots to help Harvard defeat BYU. He had nine or more points in six of his next eight outings, culminating in a 10-point performance in a road loss in Hanover. In the 12 Ivy League games that followed, he'd hit or clear that mark just twice while shooting just 22 percent from deep after shooting 44 percent to that point.

Entering his senior season in Cambridge, Miller's should attempt to become a better version of himself, not a new player:

1.Quicken The Release — Harvard coach Tommy Amaker often runs Miller around screens but the offense doesn't run the quick catch-and-shoot actions for the senior that are so common in the NBA. While Miller has a quick release, making it even faster would make those actions a more viable offensive threat.

2.Improve Passing In Space — Miller's relative lack of size and athleticism will make it hard for him to be an effective finisher around the rim, but he can compensate by improving as a passer on the interior. When asked to be a lead guard last year, he showed flashes of playmaking ability; developing that further would allow him to punish defenders that go over picks instead of running through them.

As a captain, Miller is likely in line for some serious playing time. He improved as a perimeter defender last year, which makes him a better fit alongside Chambers—the presumptive starter at the point. Seeing him as a starter is difficult, however, since the team needs to make minutes for sophomore Corey Johnson, a better shooter than Miller who has a lengthier frame and a more varied offensive game.

Still, Miller is steady at the point and Amaker puts a high priority on seniors. The best bet is that Miller will come off the bench to replace Chambers and may even work with him in two point guard lineups when the opponent does not have large guards that can punish him inside. Of all the players on the lineup, Miller may be able to get up the best shot when the shot clock is running down—an invaluable commodity on the second unit.