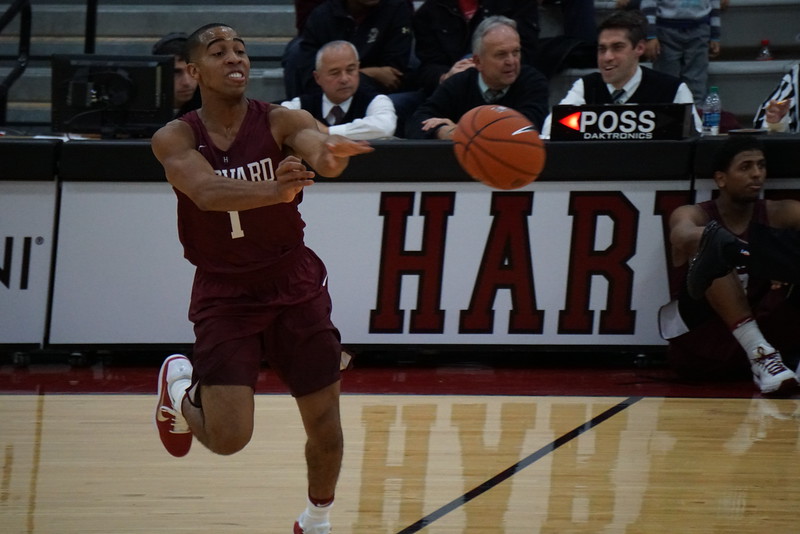 Returning to the team after an ACL injury, Chambers will lead the team at point.
By David Freed, Crimson Staff Writer

As the Crimson prepares to take on Stanford in its season opener, David Freed recaps the last season for each of the players on this year’s team and discusses the important season goals for each student-athlete. In this article, he discusses the recent progression and the relevant next steps for senior point guard Siyani Chambers.

Returning to the team after an ACL injury, Chambers will lead the team at point. By Ryosuke Takashima

Coming into the 2015-2016 season, Chambers—a three-year starter at the game's most important position—was expected to be the senior leader on a team that had just lost four rotation players (including its best player, Wesley Saunders '15) to graduation. Although the team had just three of its top seven players from a year ago, the conventional thinking went that the presence of Chambers—a consummate winner at every level of his career—gave it a chance to get its sixth straight league title.

The fantasy evaporated as quickly as it started. Chambers suffered an ACL injury during an offseason workout and was forced to drop out to maintain his eligibility for the following season, leaving the team in disarray. Harvard finished 14-16 and needed wins in four of its final five conference games just to get to .500 in Ivy League play. With Chambers often watching from the stands, the Crimson was blown out multiple times at home—something that did not happen once during his first three years on the team.

His presence loomed large all year and the team's decision to elect him co-captain for the upcoming year represented his influence and gravitas among a locker room he never inhabited. His return is symbolic of the team's hopes of returning to its old ways and he is expected to be as big a part as any in the revival.

Going into his senior year, there were a couple important areas of Chambers' game that he needed to improve on. Two main objectives stand out:

1. Improve Decision-making — Before Chambers' junior season, Harvard coach Tommy Amaker noted how much he wanted his point guard to become more efficient. Chambers failed miserably at this goal, shooting just 36 percent from the field and 34 percent from three—both career lows. He can reverse the direction of the trend by trimming the fat from his game (namely the pull-up elbow jumper in transition) and moving more without the ball to spot up behind the line.

2. Finish Better Around The Rim — Dating back to his freshman season, Chambers has frequently struggled to finish possessions at the cup. Generously listed at 6'0", he fails to use his body to create separation with defenders, leading to layups that clang off the rim. Fixing these issues will round out his offensive game and lead to a nice jump in efficiency.

Barring another injury, Chambers will be the team's starting point guard when they return to campus. As an unquestioned leader of the team and an Amaker favorite, he will be given every chance to bond with senior All-Ivy center Zena Edosomwan and excel in the offense. As a leading ball handler, he can maximize Edosomwan's athletic ability by making the duo a fearsome pick-and-roll tandem, a staple play around which Amaker can build a successful offense.

On the other end, Chambers' defensive ability will be a big part of Harvard's success in Ivy League play. Although he is undersized, Chambers has improved significantly as a defender during his time in Cambridge and steps in as unquestionably the best defensive point guard in the league. In his last official game, he harassed UNC guard Marcus Paige all contest, something Amaker will call on him to replicate against the premier Ivy guards such as Princeton's Devin Cannady.

In fact, Harvard's ability to go back to the top of the league will be in large part dependent on Chambers' ability to win those matchups. Cannady might be the best player on the preseason favorite—if Chambers can defang him, Harvard will have no problem shutting down its main rival's offense. By contrast, if he gets the better of Chambers, the Crimson will struggle to keep up, making Chambers—once again—Harvard's most important player.