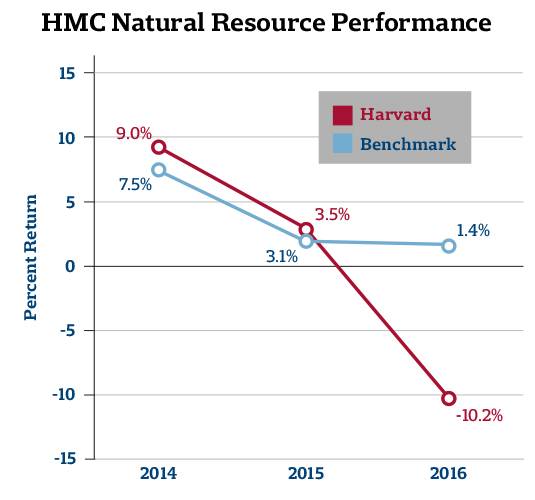 In an emailed statement, Emily Guadagnoli, a HMC spokesperson, wrote that the company is “refining” its approach to natural resources investing.

“The team is focused on refining HMC’s natural resources strategy and streamlining assets that are concentrated across certain asset classes and geography,” Guadagnoli wrote.

In particular, she pointed to the recent hiring of Colin Butterfield—a farmland investor—as the head of the company’s natural resource division in mid-August. Butterfield joins an HMC in transition: N.P Narvekar, the former manager of Columbia University’s endowment, will take the reins of the University’s investment pool in December and replace Stephen Blyth, who resigned in July after less than two years as CEO. Narvekar will be the fourth CEO at HMC in a decade.

Harvard’s current natural resource portfolio–comprised of assets from across the globe, including vineyards in California, and timber in Central and South America—constituted 10 percent of Harvard’s endowment in FY 2016. While the asset class did not meet internal benchmarks in FY 2016, it has performed well in past years.

In HMC’s annual endowment report, interim CEO Robert A. Ettl wrote that the “environment for direct natural resources investments was challenging” throughout FY 2016, citing declining commodity prices. Additionally, Ettl specifically mentioned two declining assets in South America: one “experienced severe drought during the crop season as well as an unusually high cost of production,” and the other “declined as a result of a challenging economic and political environment that made it increasingly difficult to find secure financing.”

In FY 2016, Harvard posted its worst returns on the endowment since the financial crisis, returning negative 2 percent on the endowment—a drop that University President Drew G. Faust said would constrain budgets. Beyond the poor investment returns, several financial flows affect the endowment's value, including the $1.7 billion HMC distributed to fund over a third of Harvard's annual budget.

Amidst HMC’s recent underperformance, Narvekar will take the reins from Ettl as HMC’s CEO on Dec. 5. Experts and financial analysts predict Narvekar will likely continue to restructure Harvard’s “hybrid” investment model, which some have criticized as inadequate.