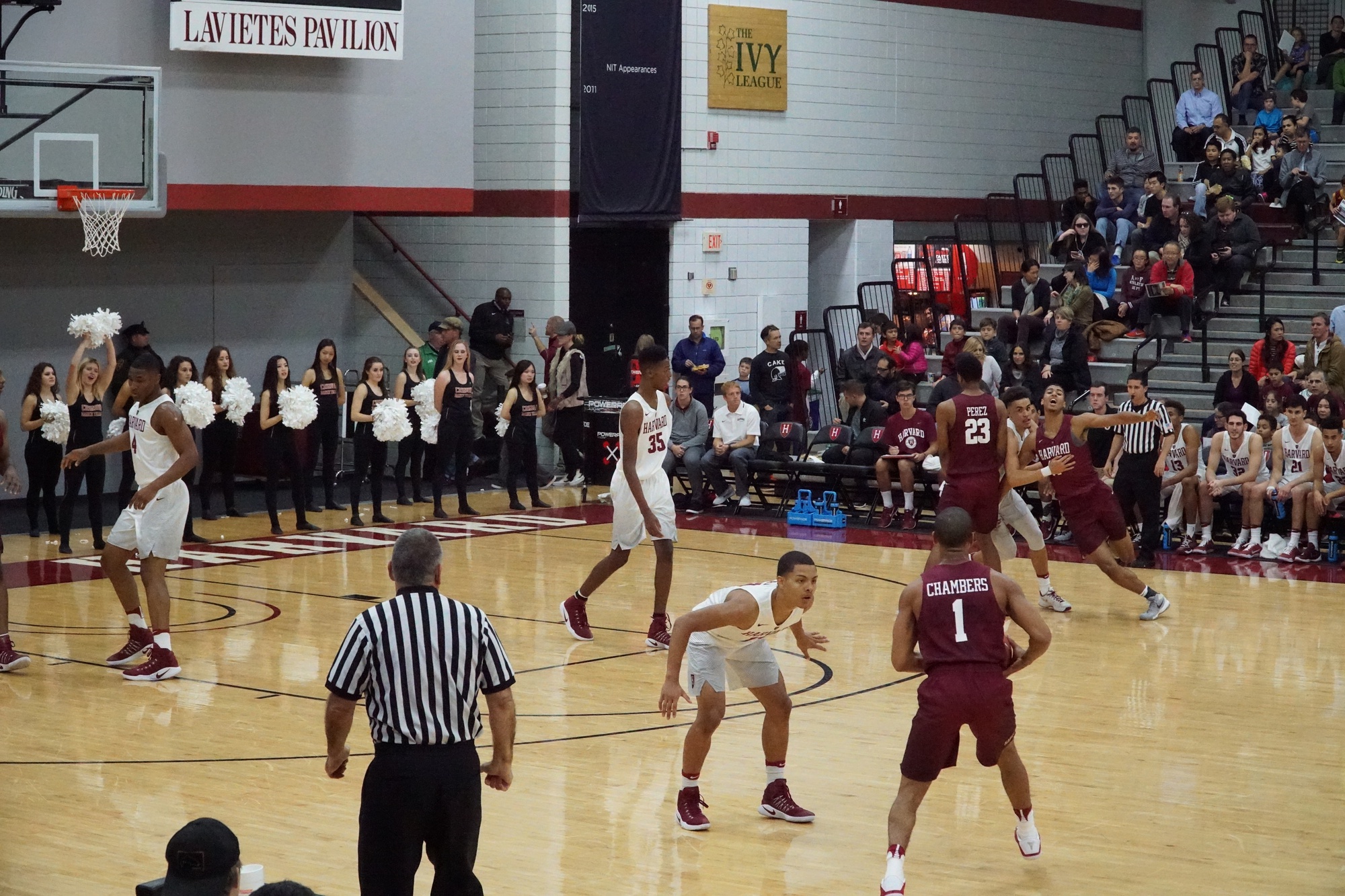 The basketball see in action at Crimson Madness October 14. The team had the chance to showcase its talent ahead of its season. By Ryosuke Takashima
By Stephen J. Gleason

If Thursday night was any indication, one of Harvard’s biggest question marks may end up being one of its strengths this season. Wings Justin Bassey, Corey Johnson, and Seth Towns combined for 37 points to lift the Crimson to a 78-51 victory over Fisher College (1-1). Harvard (1-1) was able to empty its bench in the team’s regular season home opener.

“I was really, really thrilled with how our young kids were able to respond with starting and producing,” Harvard coach Tommy Amaker said. “[Bassey’s] all-around play was sensational. I was very pleased with how he took advantage of an opportunity and that’s something for us going forward.”

Two key revelations were brought to the fore during the game’s player introductions. The first was that co-captain Siyani Chambers was in street clothes after a hard fall in the team’s season opener against Stanford. However, he is expected to return to practice as early as tomorrow. The second was that the visiting Falcons did not have a starter taller than 6’5”. Despite not having its starting point guard, Harvard was able to jump out to a comfortable lead and use its size advantage to put Fisher away before intermission.

The Crimson’s depth and size were on display from the opening tip. Amaker started four freshmen and co-captain Corbin Miller. First-year Chris Lewis was the only holdover from the starting lineup Amaker employed against Stanford. The group struggled to establish itself early on the offensive end but led by three at the game’s second media timeout and never looked back.

The Falcons’ undersized lineup worked to squeeze Harvard’s big men inside, but the starting frontcourt of Lewis and fellow freshman Henry Welsh succeeded in finding teammates for open shots on the wings. The Crimson shot 44 percent from the field in the first half and converted on eight three-pointers. Blockmates Johnson and point guard Tommy McCarthy led the trey parade before the break, combining for five triples. While the sophomores did their work from outside, Towns showed his versatile scoring arsenal. The freshman went into the locker room with 11 points, three coming from the foul line, six from three-point land, and two from an emphatic throwdown of a McCarthy lob pass. McCarthy looked comfortable running the offense in a game in which freshman point guard Bryce Aiken struggled shooting the ball.

On the defensive end, Harvard utilized its size advantage to limit Fisher’s opportunities and alter the guests’ shots. The Falcons managed to corral just two offensive rebounds and went into the break with 19 points to their credit. The Crimson held Fisher to 28 percent shooting from the field.

“We defended the ball way better in the first half than we did in the second half,” Johnson said. “We were containing and making them take tough shots, we were helpside defensive rebounding.”

The second half belonged to Bassey. A 6’5” wing from Denver, often overlooked in Harvard’s loaded recruited class, did not see the floor in Saturday’s clash with the Cardinal. However, he did not disappoint when inserted into the starting lineup on Thursday. After a quiet first half, Bassey set the tone after the break, scoring 14 points, more than any player had the entire game, in 12 second half minutes. He hit two threes and was a steady hand in a Crimson rotation that featured 19 different players getting time.

“Having this many guys, we have so many pieces to our team,” Johnson said. “So many guys bring different things to the table. The big thing for us is we don’t care who has the big night, who scores, we’re a team. Tonight, Bassey came and started his first college game and just destroyed it out there. He did a great job.”

Despite trailing by 22 at the intermission, the Falcons made some headway in the game’s second frame. The Harvard lead grew to 28 but an 8-0 run early in the half gave the visiting student section something to cheer about. Threes that were not falling in the first half began finding the bottom of the net and Fisher had an easier time getting into the heart of the Crimson defense. Seniors Kyle Holmes and Cooper Neal combined for 20 points and each Falcon starter hit a three. Despite a 50 percent mark from beyond the arc in the second half, Fisher only converted three other field goals down the stretch.

Harvard’s deep rotation was able to ensure that the Falcons never got closer than 20. Junior guard Andre Chatfield picked off a Fisher pass and took it the length of the floor for a two-handed dunk while senior Matt Fraschilla ran the point for the game’s final five minutes.

“I think it’s great,” Amaker said. “You’re not going to have opportunities like that every night and so for us to be in a position to do that, I was pleased to be able to do it and I know our kids appreciated it as well.”

Staff writer Stephen J. Gleason can be reached at stephen.gleason@thecrimson.com.