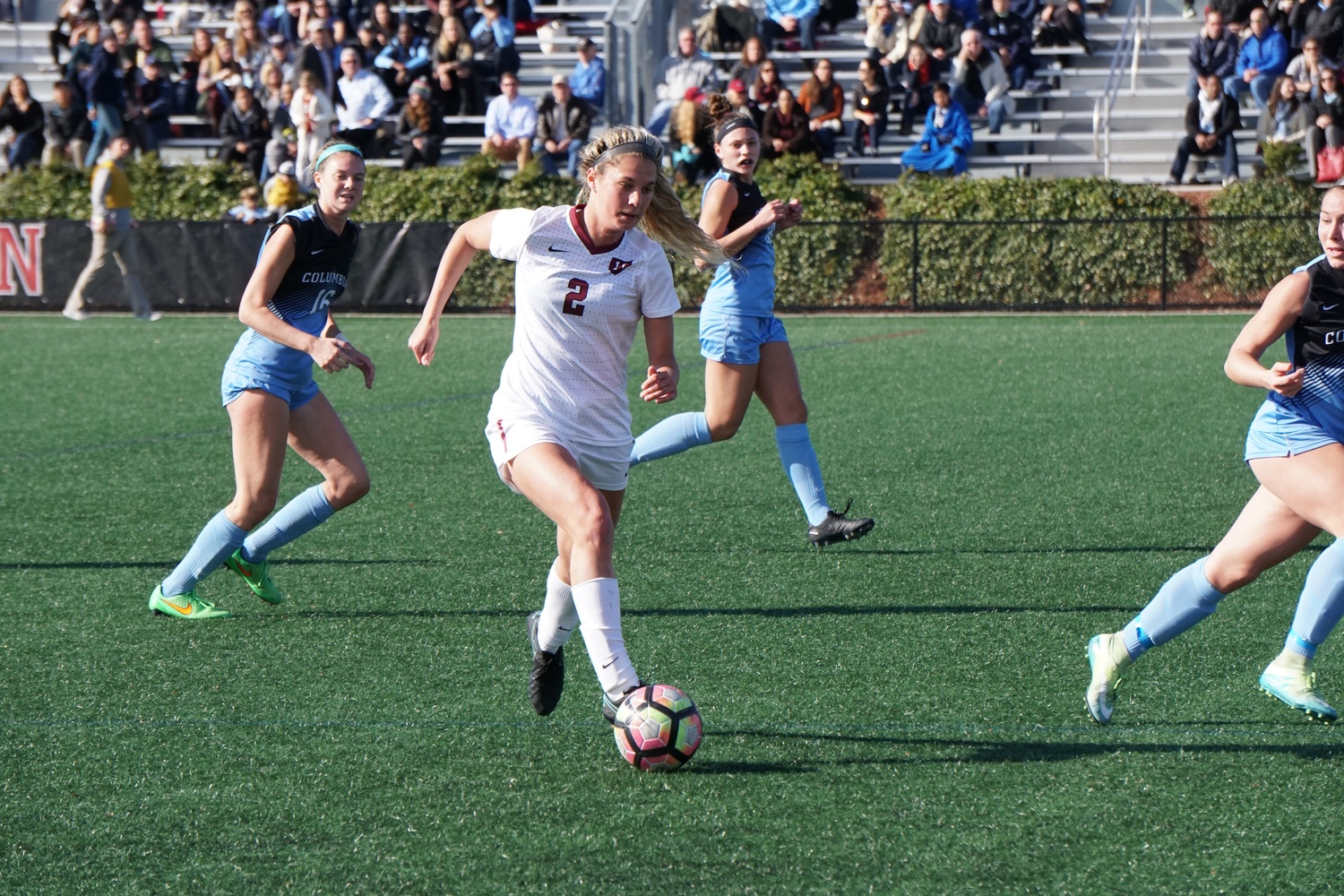 Heading into its potential final game of the season Saturday against Columbia, the Harvard women’s soccer team held a one-point lead over the Lions in the race for the Ivy League title.

With a golden goal in the second overtime period, Garcia made sure not to let that lead slip away. The senior’s game-winner helped the Crimson hold on and secure its third title in the past four years.

After failing to register a goal on five shots in the first overtime period, Harvard only needed 75 seconds to score in double overtime.

In the second overtime frame, senior forward Joan Fleischman collected the ball and beat a defender as she dribbled down the left wing. She then played a cross into the box, where Garcia was able to collect it and fire a shot past Lions goalkeeper Allison Spencer, giving the Crimson a 2-1 victory on Senior Day.

Garcia’s performance, which also included an assist to senior forward Midge Purce seven minutes into the contest, earned her Ivy League Player of the Week honors. This was Garcia’s third time claiming the award this season, and the second time she has done so in the past three weeks.

Garcia’s stronghold on the Player of the Week award over the past few weeks highlights her strong second half to the season.

Following a first half where she posted two goals and an assist, Garcia notched four goals and four assists in the final eight games of the season. Her performances over this stretch were crucial, as Harvard went undefeated over the course of its final eight games.

“Rachel has been outstanding for us this year, especially at the tail end of the season,” Harvard coach Chris Hamblin said. “She’s really grown and come into her own and become that player for us. She finds ways to score goals and create chances for other people.”

Overall, Garcia ended her regular season with six goals and five assists. Her 17 points ranked second on the team to classmate Midge Purce and fifth in the Ivy League. The Duluth, Georgia, native enjoyed her best season in her second and final year with the team, as she posted Harvard highs in goals, assists, points, and shooting percentage.

Garcia came to the Crimson after spending two years at the University of Georgia. During her time with the Bulldogs, she recorded eight goals and 11 assists. In her freshman year, she was named to Top-Drawer’s list of top 100 freshmen in the nation. Then in her sophomore year, Garcia showcased her ability to perform in clutch moments, as her two game-winning goals tied for second most on the team.

In her first season with Harvard, Garcia posted three goals and two assists in 17 appearances, 13 starts, for the team. She also chipped in two game-winners, and her efforts earned her an All Ivy-League honorable mention. That year, the Crimson finished second in the Ivy League behind Princeton.

And that’s exactly what they did. As a result of Garcia’s heroics Saturday, the team moves on to face Rutgers (11-4-6) on Saturday in the first round of the NCAA tournament. Rutgers comes into the matchup having lost 2-1 to No. 8 Minnesota on Saturday, but remains a formidable opponent.

Furthermore, every game from here on out will be do-or-die for the Crimson and its most veteran class, as the NCAA tournament follows a single-game elimination format.

“It’s been a fun season,” Garcia said. “We had eight seniors this year, so we were all really going for it. I thought all the seniors this year did an awesome job being leaders and also on the field.”

“I learned that the team is much more than a group of individuals,” Hamblin said. “They believed in each other, they believed in themselves, and they were able to take risks, deal with adversity, and put themselves in challenges that were really outside their comfort zone.

“I’m just so proud of them that they were able to get the reward they deserved.”