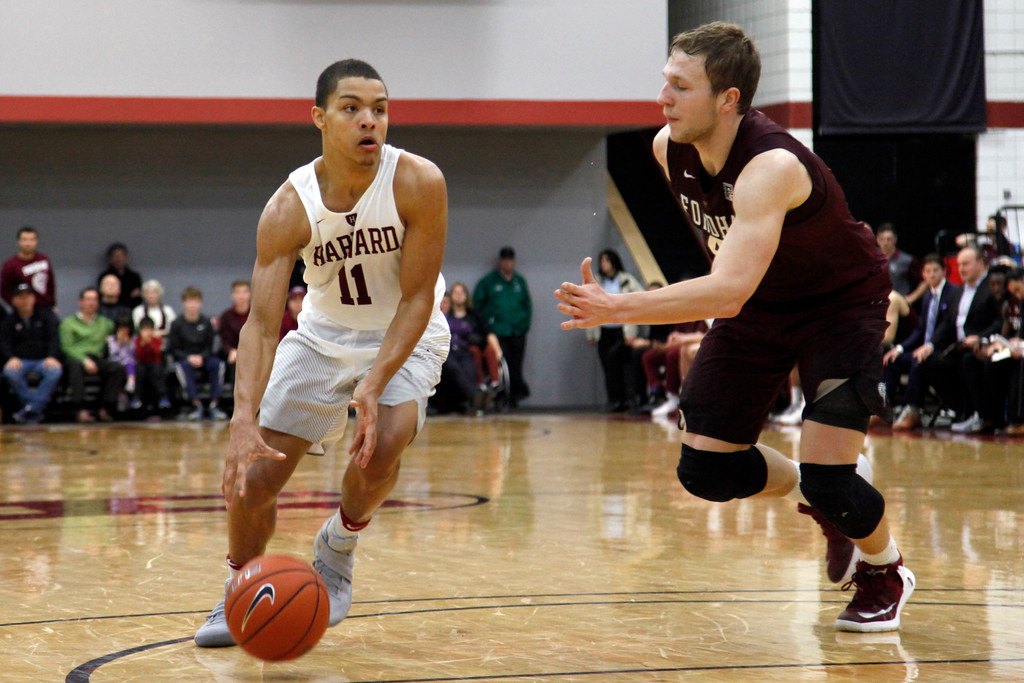 Freshman guard Bryce Aiken, shown in previous action against Fordham, sparked a Harvard comeback in the second half to push the Crimson past Houston, 57-56.
By Theresa C. Hebert, Crimson Staff Writer

Freshman guard Bryce Aiken, shown in previous action against Fordham, sparked a Harvard comeback in the second half to push the Crimson past Houston, 57-56. By Timothy R. O'Meara

Not a creature is stirring in Cambridge as most Harvard students have headed home for the holidays, but in Houston, the Harvard men’s basketball team, tore open the shutters, threw up the sash, and came away with an important road win over Houston. Though the team at one point fell behind by nine points in the second half, freshman Bryce Aiken scored eight points with what seemed like a wink of his eye and a twist of his head to put the Crimson back in the game and eventually dash away with a 57-56 win.

HEATING UP FOR THE HOLIDAYS

After starting the season 1-4, Harvard (5-4) has won four straight games—beginning with a 64-52 victory over Fordham on Dec. 3. With the five wins, Harvard has begun to find its identity, based off of a small lineup spearheaded by senior co-captain Siyani Chambers and freshmen Bryce Aiken and Seth Towns.

Chambers, the team’s “quarterback” according to Harvard coach Tommy Amaker, has been one of the most effective point guards in the country, dishing out 7.6 assists per game. Towns and Aiken have taken charge of the scoring, averaging 12.8 and 13.5 points per game, respectively. The trio has typically been joined by sophomore guard Corey Johnson, the team’s best shooter, and one of two bigs—either senior Zena Edosomwan or freshman Chris Lewis—to hold down the paint.

It is the second year in a row that Amaker has had to break in a young team. Last year, the Crimson competed in the Diamond Head Classic in Honolulu following the break in play for final exams, and outperformed expectations by defeating Brigham Young, Auburn, and leading Oklahoma—an eventual Final Four team—at the half.

While Houston (9-3) doesn’t compare to the likes of the 2015-2016 Oklahoma team, it represents one of the hardest games in Harvard’s schedule this year as it is the highest ranked non-conference opponent for the Crimson according to Ken Pomeroy. Prior to facing the Crimson, the Cougars were scoring over 82.7 points per game. Harvard however, held Kelvin Sampson’s team under 60 points on 33.9 percent shooting from the floor.

The win comes just over two weeks before the Crimson kicks off its Ivy League schedule, facing Dartmouth on Jan. 7. Harvard was picked second in the preseason Ivy League rankings, but with the implementation of a playoff tournament to determine the team that goes to the NCAA Tournament, the team with the best record at the end of the season will not necessarily represent the Ancient Eight in the Big Dance.

Amaker calls Chambers the team’s most important player, but on Friday night, Aiken stole the show. After a quiet first half in which the New Jersey native scored just one field goal and Harvard shot under 30 percent from the floor, Aiken came alive in the second half.

As the Cougars stretched the lead to nine with 6:21 to go in the game, Aiken held the ball behind the arc before driving by several defenders for a bank shot to pull his team within seven. A Houston bucket and a layup by Harvard freshman Justin Bassey kept the deficit at seven. Ninety seconds and two threes by Aiken later and the Crimson was back within one, 54-53.

Overall, the freshman tied a season-high with 21 points—tying his output in the season opener against Stanford in Shanghai.

On the defensive end, Aiken was tasked with guarding Houston’s leading scorer Rob Gray in the backcourt. Though Gray led the Cougars with 15 points, the total was less than his typical 20.5 per game, and required 21 shots from the floor.