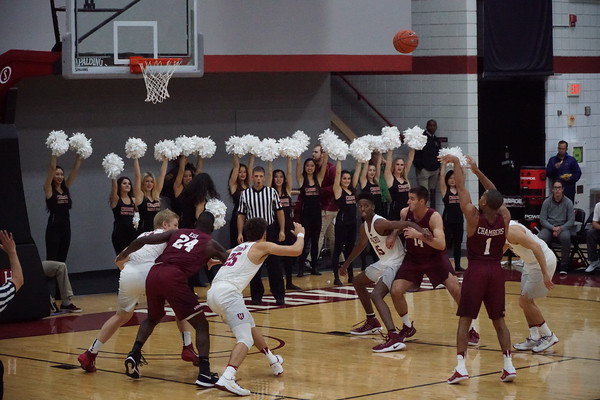 The Crimson, shown in previous action at the Crimson Madness scrimmage, shot over 80 percent from the line against Fordham on Tuesday. By Ryosuke Takashima
By Troy Boccelli, Crimson Staff Writer

With seconds left on the clock in the first half, co-captain Siyani Chambers drove inside and kicked the ball out to sophomore guard Corey Johnson. Johnson stepped back and nailed the three as time expired to give the Crimson a 29-25 lead. Despite an early Fordham (5-4) comeback in the second period, the Harvard men’s basketball team would hold on in the second half to secure the 64-52 win.

“Obviously for us it feels great to have a victory under our belt after we have struggled and trying to find a rhythm, against a team that plays incredibly hard,” Harvard coach Tommy Amaker said. “We knew how hard Fordham plays, how aggressive they are defensively, so I’m really pleased with our guys.”

With a smaller-than-usual starting lineup, the Crimson (2-4) was able to move past some of the shooting struggles that plagued them in three consecutive losses before Saturday’s win. With a starting lineup of Chambers, Johnson, and freshmen Bryce Aiken, Seth Towns, and Henry Welsh, Harvard shot a season-high 48 percent from the field.

“We thought, because of going against Fordham and their style, we thought that we needed a bit more ball handling and we wouldn’t suffer from it as much,” said Amaker. “With Bryce and Siyani in the backcourt and Corey on the perimeter maybe getting perimeter shots and Seth as kind of that second big guy, I thought it was an adjustment that was well received this afternoon.”

Despite a strong second half, the Crimson struggled to create offense early on. In a first period that saw seven lead changes and five ties, Harvard turned the ball over nine times and was held to a single field goal for a period of over five minutes halfway through the first.

Co-captain Corbin Miller, however, was the spark from the bench that the Crimson needed. He wouldn’t miss a shot in the first half, going four-of-four from the field and two-of-two from beyond the arc for 10 points.

Miller wouldn’t be the only bright spot coming from the bench, as Harvard’s reserves would outscore the Rams’ 24 to 10.

Beyond the strong offense, Harvard was also able to limit a high-scoring Ram’s squad to 52 points on 33 percent shooting. Despite averaging nearly nine three-pointers a game, Fordham was held to five treys on 26 percent shooting from beyond the arc.

After a 4-0 run to begin the second half, the Crimson struggled to pull away from the Rams. A jumper from Aiken would extend Harvard’s lead to eight, but Fordham would respond in tandem with two threes and a dunk off of an Aiken turnover to tie the game at 35.

Luckily for the Crimson, it began to fall late in the second half. After the Rams tied the game, both Aiken and freshman forward Robert Baker, Jr. would make it to the line to give Harvard a lead it wouldn’t relinquish. Aiken would add to the lead after dribbling down the court to drain a corner three after shaking his defender. The Crimson would proceed to go on an 8-0 run late in the second half to close the game out.

“The last couple games we’ve obviously lost but they’ve all been relatively close games, a lot of late game runs or opening half runs,” senior forward Zena Edosomwan said. “I think today was definitely a step in the right direction in terms of maturity and kind of growing.”