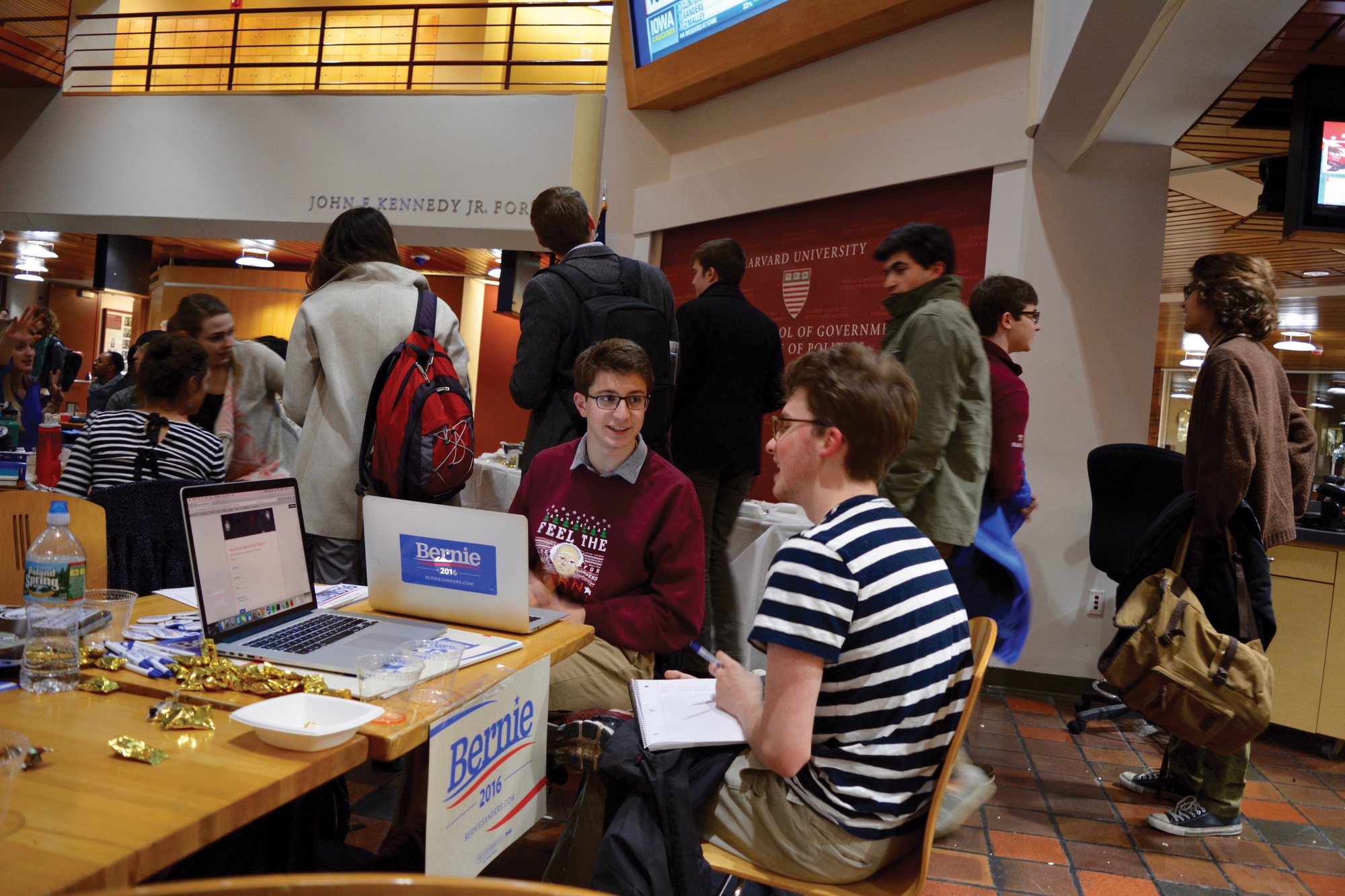 Students gather at John F. Kennedy Jr. Forum to watch the results come in for the Iowa caucuses, the first election of the presidential election year. Admission was only given to Harvard student ID holders. By Saul A. Urbina-Johanson
By Kabir K. Gandhi and Daniel P. Wood, Crimson Staff Writers

Conservative and Democratic Harvard affiliates had mixed feelings about Monday night’s Iowa caucuses and their role as the 2016 Presidential race unfurls.

As the results flooded in Monday night, Senator Ted Cruz emerged as a clear victor, while the Democratic race between former Secretary of State Hillary R. Clinton and United States Senator Bernie Sanders proved too close to call at the conclusion of the Institute of Politics debate watch party. Early Tuesday morning, the Iowa Democratic party called the “historically close” race for Clinton, who received 49.9 percent of the vote to Sanders’ 49.6 percent. 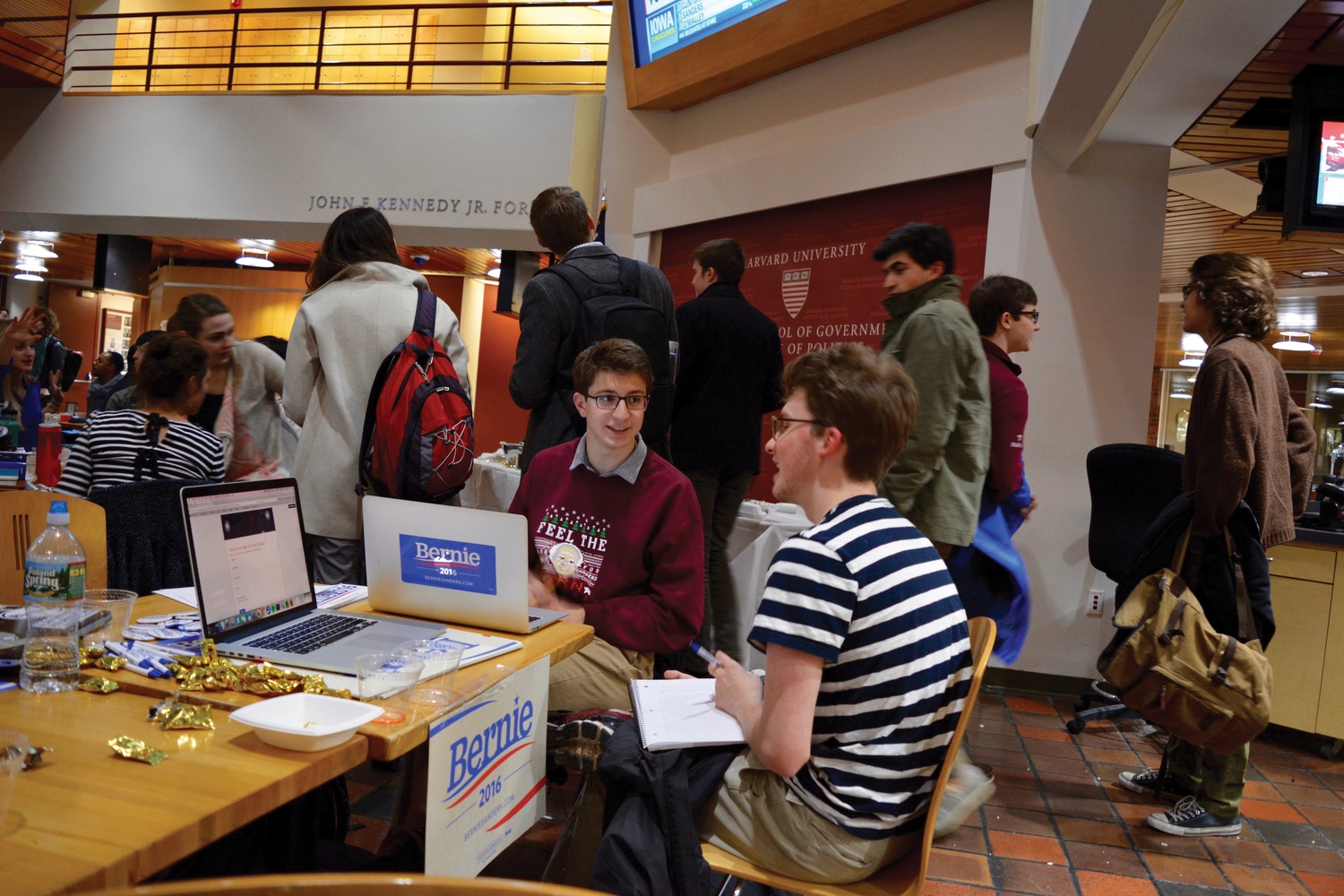 Students gather at John F. Kennedy Jr. Forum to watch the results come in for the Iowa caucuses, the first election of the presidential election year. Admission was only given to Harvard student ID holders. By Saul A. Urbina-Johanson

The first contest of the primary season, the Iowa caucuses “give momentum to the candidates that either win or outperform expectations... and whittle down the field of Iowa candidates,” said Carlos E. Diaz Rosillo, a lecturer of Government who teaches Government 1359: “The Road to the White House,” this semester’s second largest course.

Clinton supporters on campus said they were nervous about the closeness of the caucus results but were still optimistic about her future chances in the election process.

“It was definitely a nail-biter last night. I think it is still a very contentious race at this point but I do hope that Clinton pulls through in the end,” said Joseph L. Choe ’17, president of the Harvard Political Review.

Diaz said he considered the results in Iowa potentially “troubling” for Clinton supporters, and he suggested that the caucus served as a boost to Sanders’ campaign.

Harvey C. Mansfield Jr. ’53, a professor of Government and an outspoken Conservative, disagreed about the significance of the result for Sanders.

“Sanders almost got it, but he didn’t. A win’s a win for Hillary and I think that she is relieved and if not somewhat surprised at her success,” Mansfield said.

He Li ’16, president of Harvard United for Bernie, said he was pleased to see Sanders perform better than exit polls had suggested, and attributed this surge in popularity to more serious discussion about politics among voters and the work done by volunteers.

“I think that speaks to how powerful the ground game has been in Iowa over the past weekend and on Monday,” Li said. “Bernie has strong support among college students which may have motivated them to talk about Bernie to their families.”

On the Republican side, the results from Iowa are likely to whittle down the Republican field to a three person race, according to Diaz and Manfield. Unless another Republican gains momentum in New Hampshire, outsiders Cruz and Donald J. Trump—who have little support from Harvard Republicans—will likely face Senator Marco A. Rubio in a three way race, they said.

Rubio received 23 percent of the Republican vote, a much higher number than the 15 percent figure that Republican pollsters in Iowa predicted only a few days ago.

“Trump lost by coming in second, and Rubio won by coming in third,” said Mansfield, who added that he is “tending to support Rubio,” although he has yet to formally endorse.

Cameron K. Khansarinia ’18, National co-chair of Students for Rubio, said “we were very pleased by the result [of Iowa].”

New Hampshire will hold primary elections next week. Still, professors warned against placing too much emphasis on both Iowa and New Hampshire’s results because the states’ relatively homogeneous populations do not accurately represent the national Democratic and Republican fields.