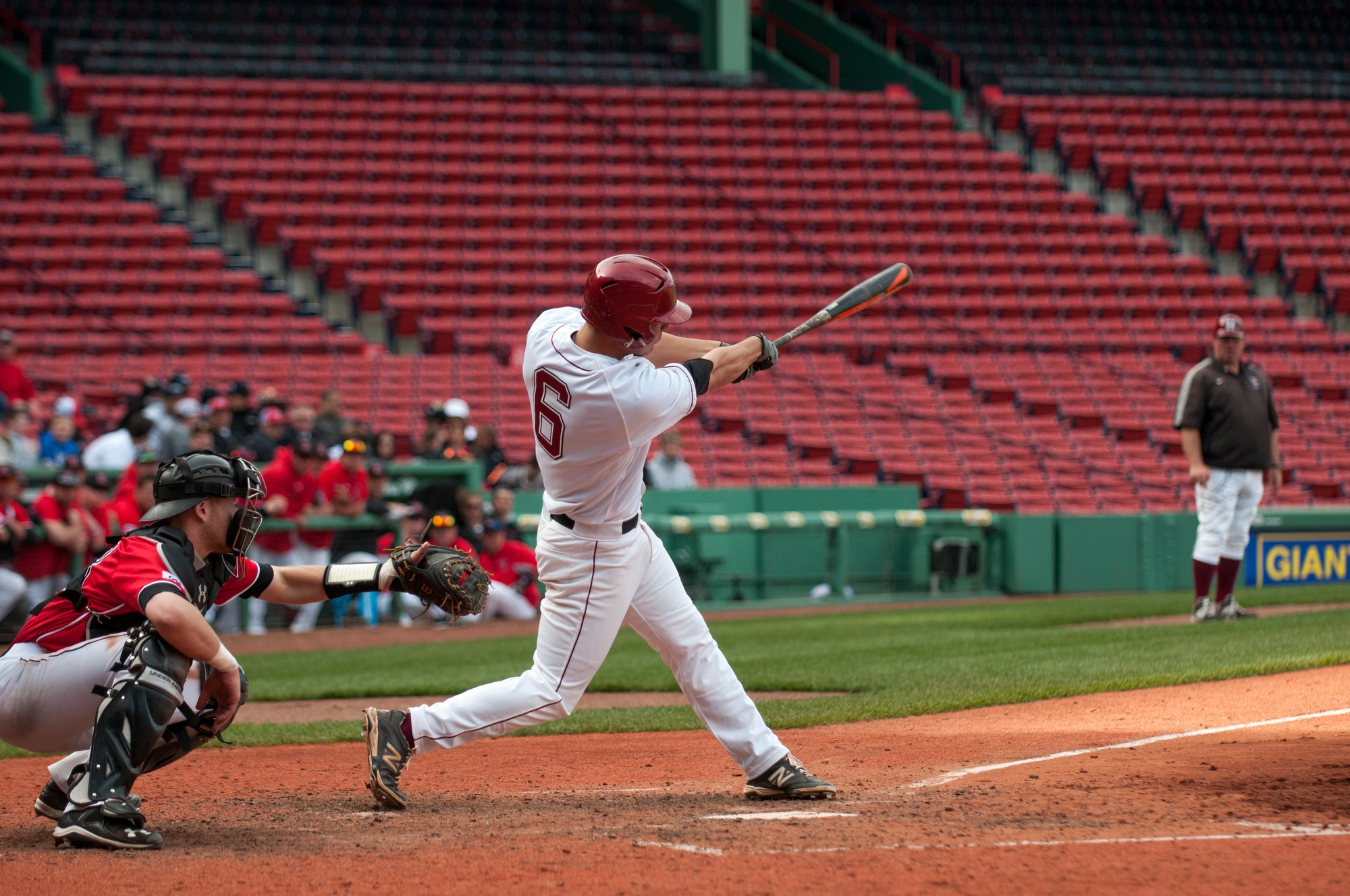 Senior Mitch Klug went 5-for-5 in the series opener as part of a 6-for-9 effort in two games against the Black Knights. By Mark Kelsey
By Manav Khandelwal, Crimson Staff Writer

The Harvard baseball team (5-7) finished up its Spring Break trip in Florida with a three-game set against Army on Thursday and Friday, losing the opening game on Thursday before splitting Friday’s doubleheader with the Black Knights (8-10).

The Crimson recorded double-digit hit totals in each of the three games at Jack Russell Stadium in Clearwater, with Saturday’s finale rained out after the top of the third inning, with Harvard leading, 3-0.

“This whole break in general has been pretty positive,” captain DJ Link said, “and I think we’re pretty confident going into Ivies that we have a good team, a good lineup, a good staff, and guys in the bullpen who can come in and do their jobs. As a whole, we’re in a good situation.”

Sophomore third baseman John Fallon continued his strong start to the season with four hits and five RBIs. Senior second baseman Mitch Klug had six hits in nine at-bats in the series, improving his batting average from .171 to .273.

The Crimson avoided a sweep Friday afternoon with a win over the Black Knights, riding junior right-hander Nick Gruener’s complete game to a 5-3 win. Gruener improved to 2-1 on the season, striking out four while walking none.

“We all knew [Gruener] was going to go out there and pitch well,” captain Matt Sanders said, “but it was a tremendous effort for him to go out there, throw a complete game, and succeed against their hitters who are scrappy at times. Hats off to him for a great effort and pitching incredibly well.”

Army struck first in the second, but freshman center fielder Ben Skinner, hitting ninth, smashed his first career home run over the left field wall in the top of the fourth to give the Crimson a lead it would never relinquish.

The Black Knights saw their cleanup hitter get on base in every at-bat through six innings, but Gruener stayed composed. In the bottom of the fourth, Army started with three singles but the Miami native battled back with a strikeout and two flyouts to end the rally.

Runs in the sixth and eighth innings gave Harvard insurance heading into the ninth, and after a two-out error allowed the Black Knights to cut the lead to 5-3, Gruener forced a pop up to finish things off.

With ace senior Sean Poppen on the mound in the first game of the doubleheader, bad defense cost the Crimson in a tough 6-4 loss.

Poppen threw six innings while allowing six runs, with only two earned. The death blow came in the top of the sixth, when the Black Knights tagged the Virginia native for four runs, all unearned and all with two outs.

Quinn’s sacrifice fly in the fourth cancelled out Army’s RBI single in the top of the second, but the Black Knights to retake the lead on a wild pitch in the top of the fifth. In the sixth, an errant throw from Poppen on a bunt allowed the batter to reach second. A single and walk loaded the bases before back-to-back two-run singles extended Harvard’s deficit to 6-1.

Freshman left fielder Trent Bryan hit a three-run home run in the bottom of the seventh, the first four-bagger of his career, but it wasn’t enough as the Crimson’s rally came up just short. Nonetheless, the team’s veterans took notice of the performance of the younger hitters.

“I’m really impressed with the younger guys, coming out playing with energy and being fearless out there,” Sanders said. “You look at guys like Bryan, McColl, Skinner, and they’ve settled into a role quickly in the lineup, and I think they’re going to be guys we can really rely on later in the season.”

The first contest of the series was arguably the most exciting, with the two teams combining for 25 runs and 29 hits before the Black Knights grabbed a walkoff win, 13-12. Klug was the main man offensively, going 5-for-5 with two runs and an RBI.

Harvard’s bats were hot from the start, scoring four runs in the first. Army responded with three in the bottom half of the inning, setting the tone for the game.

“When we had runners in scoring position, we were capitalizing on those opportunities,” Link said. “That’s what you have to do in games where you’re going to put up a lot of runs.”

Fallon’s three-run double in the top of the fourth extended Harvard’s lead to 7-4 before the Crimson scored three more in the fifth to grab a 10-5 advantage.

By the end of the seventh, however, Army had clawed their way back, cutting the lead to 10-9. RBI singles from Bryan and junior catcher Josh Ellis in the top of the eighth seemed to provide ample insurance, but five singles in the bottom of the ninth off of senior Sean O’Neill were enough to propel Army to the victory.

–Staff writer Manav Khandelwal can be reached at manavkhandelwal@college.harvard.edu.