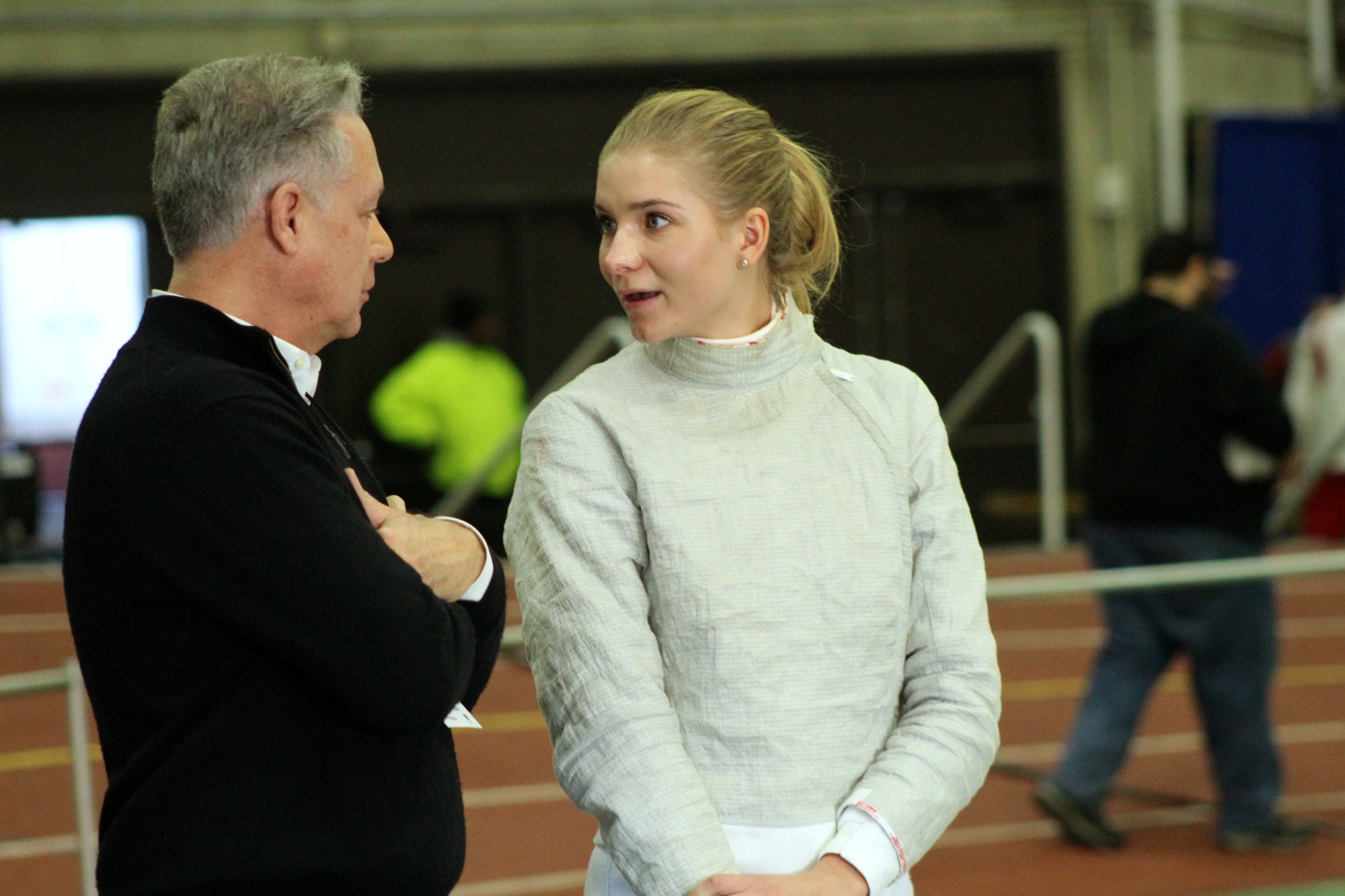 For the second time in her three-year career, junior saber fencer Adrienne Jarocki finished her season with a win at the NCAA Individual Championships. She took home the title after a hard-fought 15-10 victory over Ivy League rival Princeton’s Gracie Stone in Waltham, Mass.

“It feels wonderful,” Jarocki told a reporter immediately following the win as the ESPN camera rolled. “Words can’t really describe it. I think that not winning my sophomore year actually makes this win so much sweeter because I was able to overcome that—put it in the past—and do it again.”

Halfway across the world, the Crimson’s Eli Dershwitz—who is currently on a gap year to pursue fencing at a higher level—completed his goal of qualifying for the US Olympic Team by winning the Seoul Grand Prix on Saturday, which put him in the top 14 of the FIE Adjusted Official Ranking List. The Sherborn, Mass., native is set to become the seventh Harvard fencer to compete for America on the international Olympic stage.

While future tournaments await Dershwitz to determine Olympic seeding, the 2016 Rio Olympics are now on his official calendar in early August.

Back on the collegiate circuit, after defeating fourth-seeded UC San Diego fencer Leanne Singleton-Comfort by a 15-9 score in the NCAA individual saber semifinals, Jarocki faced second-seeded Stone. The Harvard junior had defeated Stone once before at the same event—a 5-1 pool play victory.

Similar to the pool play bout, Adrienne jumped to quick start with a 4-1 lead. But Stone mounted a quick rebuttal to briefly take a 6-5 lead. Along the way, both athletes questioned the leading director multiple times, sending him behind the table to look at the replay monitor.

Coming out of the one-minute break, Jarocki notched with a quick touch and to take a 9-6 lead. The next action resulted in what was momentarily a touch for her to go up 10-6, but a replay initiated by Stone reversed the call, resulting in a 9-7 score instead.

Stone grabbed the the momentum briefly, scoring the next two touches as well to knot the score at nine. But with Stone advancing down the strip, Jarocki used her length to score a touch while retreating to stop the run and regain the lead. Stone then responded bytaking the next touch for a 10-10 tie.

After multiple simultaneous attacks, Jarocki scored the next four touches, with Stone was visibly frustrated with herself. Now it was 14-10, Jarocki.

Two straight simultaneous attacks delayed the final result, but Jarocki advanced down the strip with a quick burst of footwork after the next en garde. Though her first attack fell short, her redouble connected with Stone’s lame, and Jarocki’s momentum carried her past her opponent and into the top spot of the championships after reaching the final four last year but unable to defend her freshman year title.

“[Adrienne] was very disappointed last year to get upset,” men’s co-captain Michael Woo said. “But Adrienne is super determined—she’s a hard worker and a great teammate, so I was really proud for her because she’s put in so much effort.”

The two-day event began with pool play, and Jarocki marched her way to a number one seeding after going 19-4 with a plus-56 indicator. But the final four still loomed, with two 15-touch bouts standing between her and a second individual title.

Other Crimson women in the saber event included senior Aliya Itzkowitz, who had lost to Jarocki at the 2014 edition of the NCAA Championships. But this time, Itzkowitz’s 10-13 record in pool play and improvement from 23rd to 15th place was not enough for her to advance to the final four. In total, the saber squas amassed 29 points.

On the men’s side, three Harvard fencers finished in the top 15, with foil fencers leading the way. Junior Stephen Mageras and Woo finished seventh and eighth, respectively, after both finished with a 14-9 bout record. Their performances earned them All-American designations—Woo’s third and Mageras’ first in the latter’s first NCAA Individual Championships appearance.

“I was really proud of Stephen,” Woo said. “Coming to the NCAAs for the first time is pretty difficult, and he did a good job staying calm under pressure and for such a long tournament, really grinding it out.”

–Staff writer Caleb Y. Lee can be reached at caleb.lee@thecrimson.com.