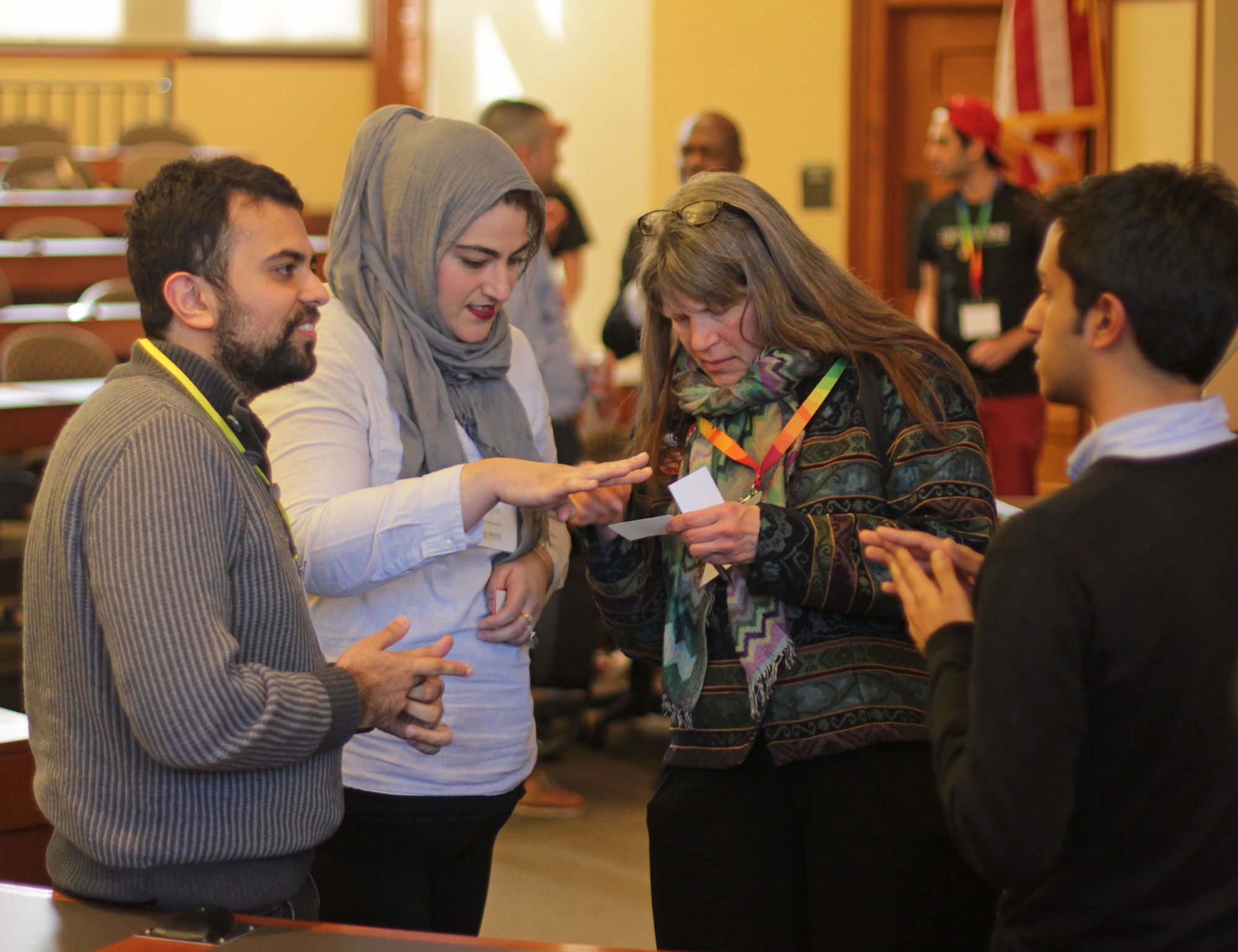 Conference attendees mingle after the “Comparative Religions” session at the LGBTQ Conference at Harvard. The third edition of the conference, the theme of which was “Beyond Marriage Equality: Rainbows at the Crossroads,” took place this weekend on the law school campus.
By Gabrielle M. Williams, Crimson Staff Writer

Roughly 300 scholars, professionals, and students from both Harvard and around the world attended the third annual LGBTQ Conference at Harvard, hosted at Harvard Law School on Saturday.

Established in 2014, the conference directed attention to topics of non-binary identity and intersectionality—the overlap of social categories such as race, class, gender, and sexuality.

This year’s conference included panels of activists and students who discussed a variety of issues ranging from criminal justice policy to safe spaces. Keynote speakers included activist and educator Robyn Ochs, Raffi Freedman-Gurspan, who was the first transgender White House appointee in the Obama Administration, and Executive Director of GLBTQ Legal Advocates and Defenders Janson Wu. 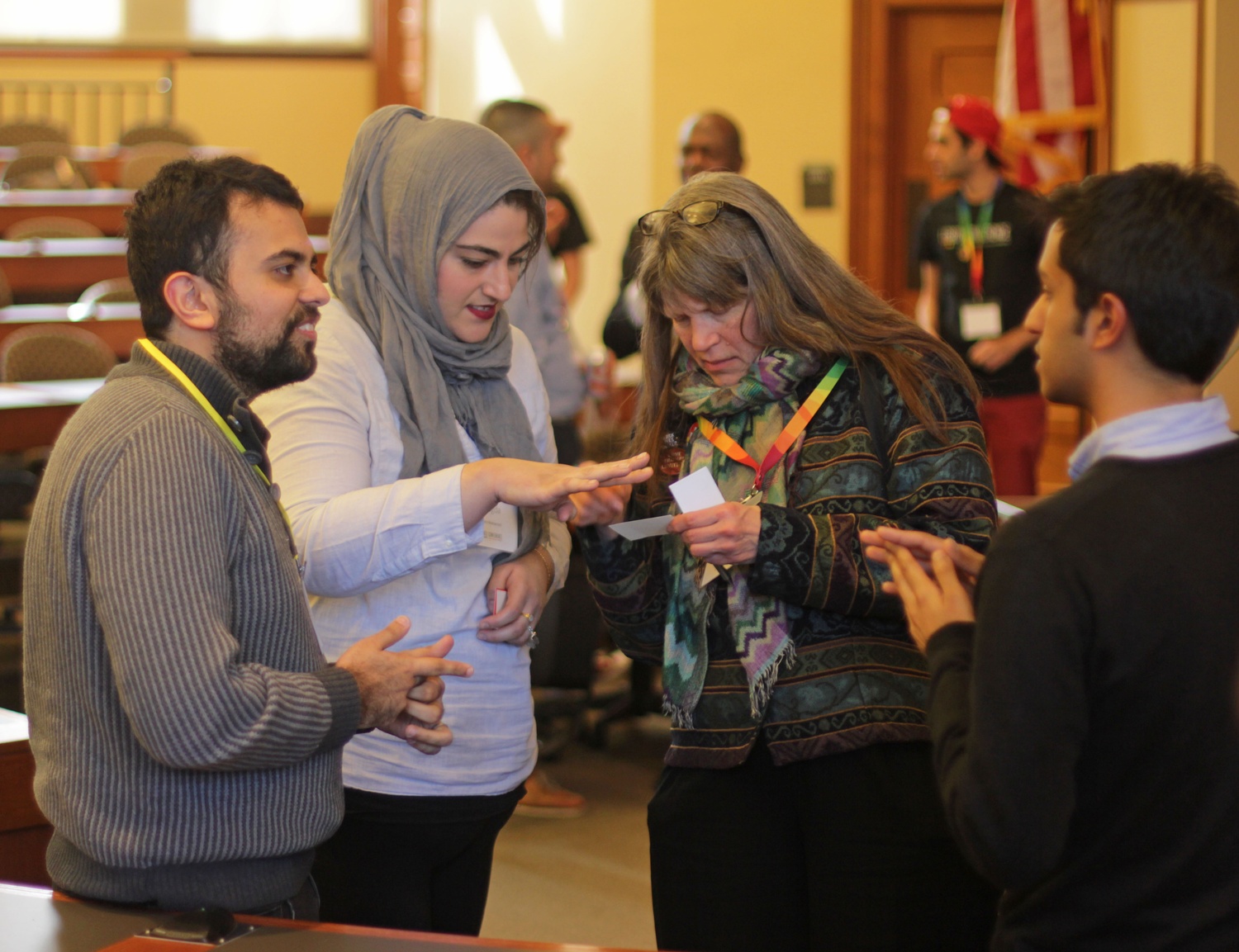 Conference attendees mingle after the “Comparative Religions” session at the LGBTQ Conference at Harvard. The third edition of the conference, the theme of which was “Beyond Marriage Equality: Rainbows at the Crossroads,” took place this weekend on the law school campus. By Annie E. Schugart

Conference coordinators focused on seeking a breadth of input through collaboration amongst representatives from each of the Harvard graduate schools when planning the conference’s topics and panels.

Members of the Harvard graduate student body were directly surveyed at the beginning of the academic year, allowing students to suggest conference topics through voting and free response, according to Kennedy School student Ted J. Sands.

“It let us embrace the specificity that sometimes comes with some of these intersectional conversations,” Sands said. “Having a smaller group of people at some of these events just meant that the people that were there were really engaged.”

One topic that has garnered attention at the conference was the ongoing debate regarding safe spaces on college campuses. A panel of Kennedy School and Law School affiliates hosted a conversation called “Safe Spaces: Continuing an Increasingly Important Conversation within LGBTQ Communities in Schools.”

Natara Gray, coordinator at the Office for Student Diversity and Inclusion at the Kennedy School, said achieving safe spaces stems from both an active investment in improving the classroom environment on the part of administrators, and a dialogue between administrators and students.

“They need to hone in on the student voices,” Gray said. “The key point for me is having the conversations with students and understanding what it is they need to thrive and to survive.”

The conference also paid significant attention to the role of religion for queer individuals, addressing what some characterized as an unexpected propensity among queer individuals to pursue religion and spirituality in their daily lives.

The LGBTQ Conference organized a new initiative this year that highlighted religion and BGLTQ identities.

The conference’s comparative religions panel the next day, titled “Sacred Struggles: Faith, Politics, and the Future of LGBTQ Equality,” engaged individuals from a variety of religious and professional backgrounds to discuss their experiences with the intersection of religion, identity, and politics.

Rabbi D’vorah Rose emphasized the need to recognize political motivations in conversations of religion, identity, and policy. She used the recent bills about gender-neutral bathrooms in state legislatures as as an example of how political agendas and religion influence the daily reality of BGLTQ people.

“We need a separation of religion as politics, and religion as what we’re all living and breathing and engaging in our daily lives,” she said.

“One thing that I really liked about this year is that people seem to be extremely engaged,” Hebel said. “When people would come out into the hallways, everyone was talking on what they heard and kind of reflecting on it, and I thought that was awesome.”