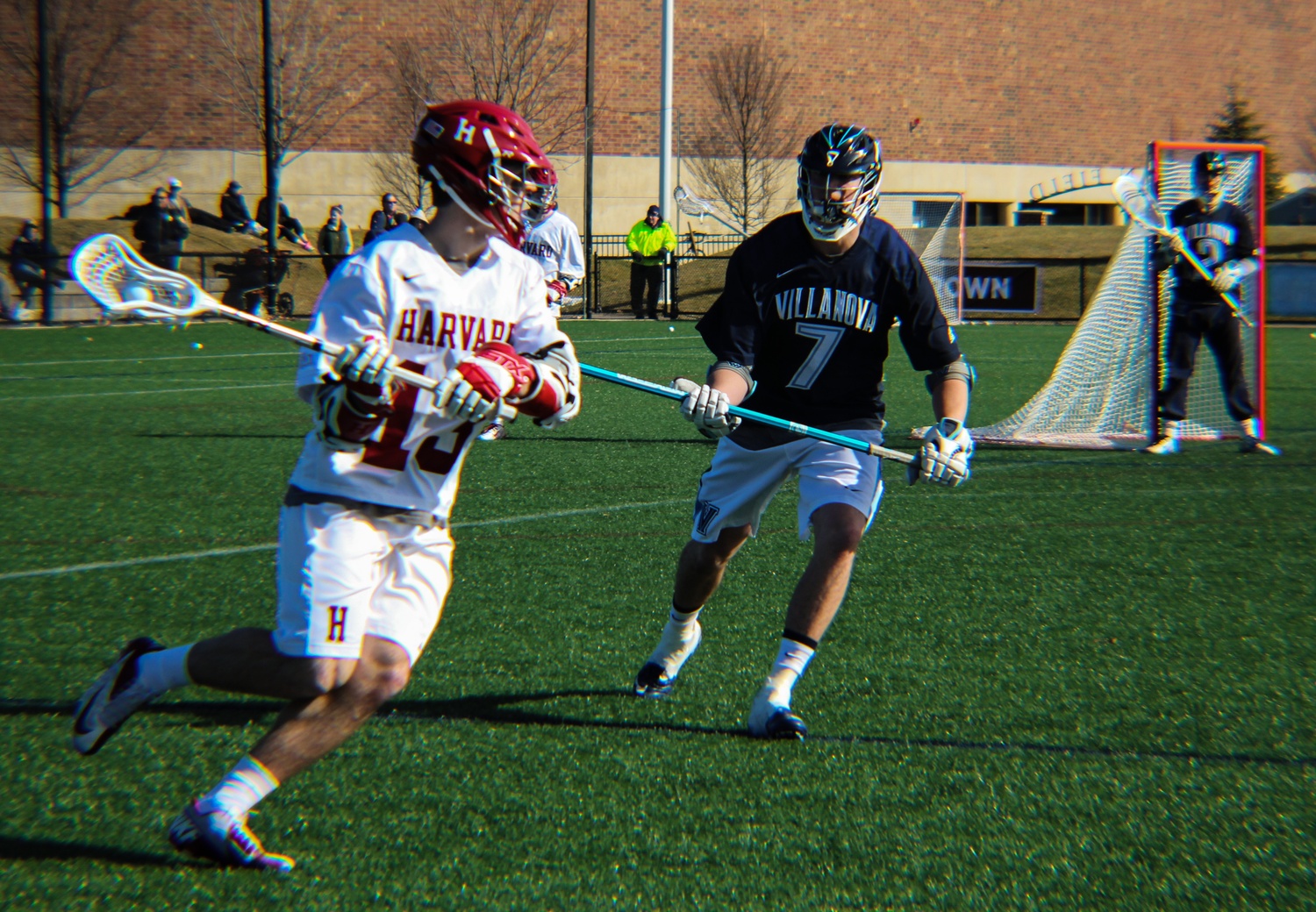 Sophomore Morgan Cheek (13) and the Crimson take on Penn this Saturday. By Hayoung Hwang
By Stuart Johnson, Contributing Writer

After earning an important 12-8 win over Cornell last weekend in Ithaca, N.Y., the Harvard men’s lacrosse team (6-5, 2-1 Ivy) will stay on the road as it travels to Philadelphia for a Saturday afternoon showdown with Penn (5-5, 2-2).

Against the Big Red, the Crimson offense came together in the second half to turn a one-goal advantage at halftime into a comfortable victory. The win over Cornell marked Harvard’s first road win in Ivy play in almost two years, and the team now hopes to replicate its successful performance against the Quakers.

“Penn is a very good team; they beat us the last three [meetings],” Harvard coach Chris Wojcik ’96 said. “This is a team and a program we have a tremendous amount of respect for. We’re going to have to play very well on Saturday to be successful.”

Though the Crimson has suffered three consecutive losses against the Quakers, the final margin in all three games was less than two goals. This year’s edition of the contest will likely be competitive once again, and important for both teams, in terms of not only placement in the standings but also for the sake of gaining momentum for the end of the regular season.

Penn, in particular, will hope to get back on track with a win over Harvard. The Quakers are on a three-game losing streak, with all three losses coming against top-10 teams. Its most recent defeat was a 17-6 blowout at the hands of No. 4 Brown.

Despite Penn’s three game losing streak, the Crimson is not taking its opponent lightly.

“They’re a really good team; our senior class hasn’t beaten them during our time here,” Harvard co-captain and midfielder Sean Mahon said. “We know it’s going to be a battle, but we’re confident and ready for it.”

The Crimson will be playing close attention to Quaker senior attacker Nick Doktor. Doktor, a four-year starter at Penn who was named second-team All-Ivy last season, is the team’s points leader with 39 on the year. Twenty-eight of those points come from assists, placing Doktor in a tie for second in the nation in that category. With his ability to create opportunities for his teammates, Doktor will likely pose a major challenge for Harvard’s defense.

To counter, the Crimson will rely on the performances of defenders like Bobby Duvnjak, who ranks first in the nation in caused turnovers with 2.45 per game. He and the rest of the Harvard defensive unit will have to be on top of their game to limit the Penn offense.

“We’ll try a variety of things defensively on Doktor,” Wojcik said. “But to defend any team, we play a team defensive system to stop him and the rest of the team.”

The Crimson has an offensive threat of its own in senior attacker Devin Dwyer. A preseason first-team All-NEILA honoree as well as a preseason All-American, Dwyer has lived up to the expectations thus far, as he enters the weekend tied for third in the nation in points per game with 4.91.

The Garden City, N.Y., native has already set a career-high with 30 goals this season, and has added 24 assists as well, the latter of which ranks tied for sixth in the country. Dating back to his freshman year, Dwyer is also on a 44-game point streak, the fifth-longest active streak in the country.

Harvard, this season, has done better than Penn in nearly every offensive statistical category, including goals per game (11.27 to 10.60) and assists per game (7.27 to 6.70). With Penn faring better in faceoffs, however, winning 43.0 percent of its battles at the X to the Crimson’s 36.8 percent, gaining possession of the ball to begin with will likely remain a challenge for Harvard.

Even with these stats to ponder and revenge in the back of their minds—the Crimson has not won at Penn since 2006—Harvard still approaches this game with the same mentality that it does in any other.

“Obviously you want to beat every team you play,” Mahon said. “It’s more about this season than anything that has happened in the past. Maybe it’s in the back of some guy’s minds, and we really want to get it for the team this year.”

If the Crimson does in fact get it, Saturday afternoon would mark Harvard’s first victory on the road at Penn since 2006.