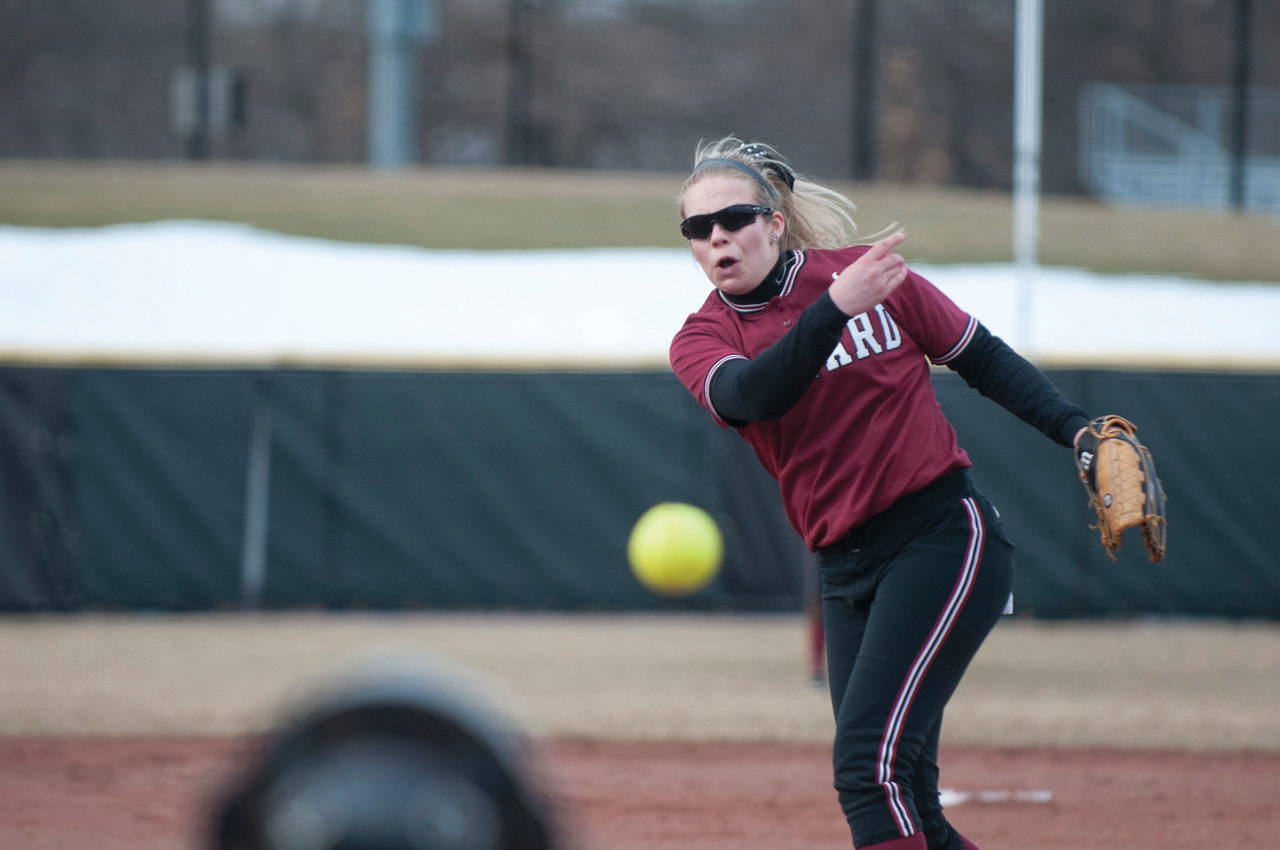 After freshman Sarah Smith left the mound in the middle of a fifth-inning jam on Thursday, junior Taylor Cabe, pictured in action last March, provided 3.2 innings of relief, allowing one run and striking out five. By Mark Kelsey
By Patrick J. Anderson, Contributing Writer

Building upon a five-game winning streak, the Harvard softball team exploded for 10 runs for the third consecutive contest Thursday afternoon, defeating the University of Maine, 10-7, at Soldiers Field.

The matchup was initially scheduled as a double-header this past Tuesday, but due to inclement weather forecasted in Boston for that day, the games were postponed and reduced to a single game. Nevertheless, two extra days of inaction could not slow the Crimson offense.

“It was a good, home, mid-week nonconference game to get working,” Harvard coach Jenny Allard said. “We got a lot of players in the game, and I thought that some of our players really stepped up and did a good job.”

Harvard (17-13, 6-2 Ivy) got off to a quick start, scoring eight runs in the first three innings, with the Black Bears (15-14, 4-1 America East) only plating two. Freshman third baseman Meagan Lantz went 2-for-3 at the plate in the first few innings, including a two-run home run in the first and a single that resulted in two runs in the third.

By the end of the day, Lantz had driven in a total of 5 runs and scored one herself.

“We just really got out there and were very aggressive on offense,” Lantz said. “Everybody was really swinging the bat well and owning the zone. We especially did well not going for the pitches that were outside the zone, so we just really attacked the plate.”

In the top of the fourth, however, the tide seemed to be turning in the visitors’ favor. Maine scored five runs on five hits in the frame, bringing the Black Bears within one run, 8-7.

Normally a relief pitcher, freshman Sarah Smith started on the mound for Harvard, but the rookie appeared to be getting tired by the end of the fourth inning. After a pitching change that saw junior Taylor Cabe take over for Smith, the Crimson managed to finally close out the top of the inning.

“Today, we wanted to give everyone rest and didn’t want to overtax our pitchers,” Allard said. “We’re thin behind the plate and thin at short, so we didn’t want these players to get overly tired with the big weekend coming up.”

The Harvard offense failed to score any runs in the bottom of the fourth to counter Maine’s rally. But with the Crimson still up by one, Cabe showed no indication of allowing the close lead to slip. In the top of the fifth, she let up only one hit before quickly striking out two batters, then getting another to ground out to third.

Back on the offensive end, Harvard managed to close out the fifth inning up two. Freshman Kaitlyn Schiffhauer lined an RBI base hit into center field, widening the gap to 9-7.

The Crimson defense again staved off Maine in the top of the sixth. Only one hitter got on base on account of a fielding error, advancing to second before Cabe quickly retired the next two Black Bears on a ground out and a pop fly to come away unscathed.

Again, the Harvard squad opened up its lead in the bottom of the inning, tallying another run on the board. Sophomore Dallas Hogan, pinch running for junior Catherine Callaway, stole second before getting to third and then home plate on a sacrifice bunt and a grounder to second, respectively.

Entering the top of the seventh, the Crimson sought to finish the job without taking another turn at bat. In fact, it did just that, only letting up one hit and holding its 10-7 lead. In total, Cabe went 3.2 innings in relief, allowing one run and striking out five.

“I think the team’s just been having a really good season so far, and it’s been really successful overall,” Lantz said. “We just need to carry that success through this weekend and into the rest of this season.”