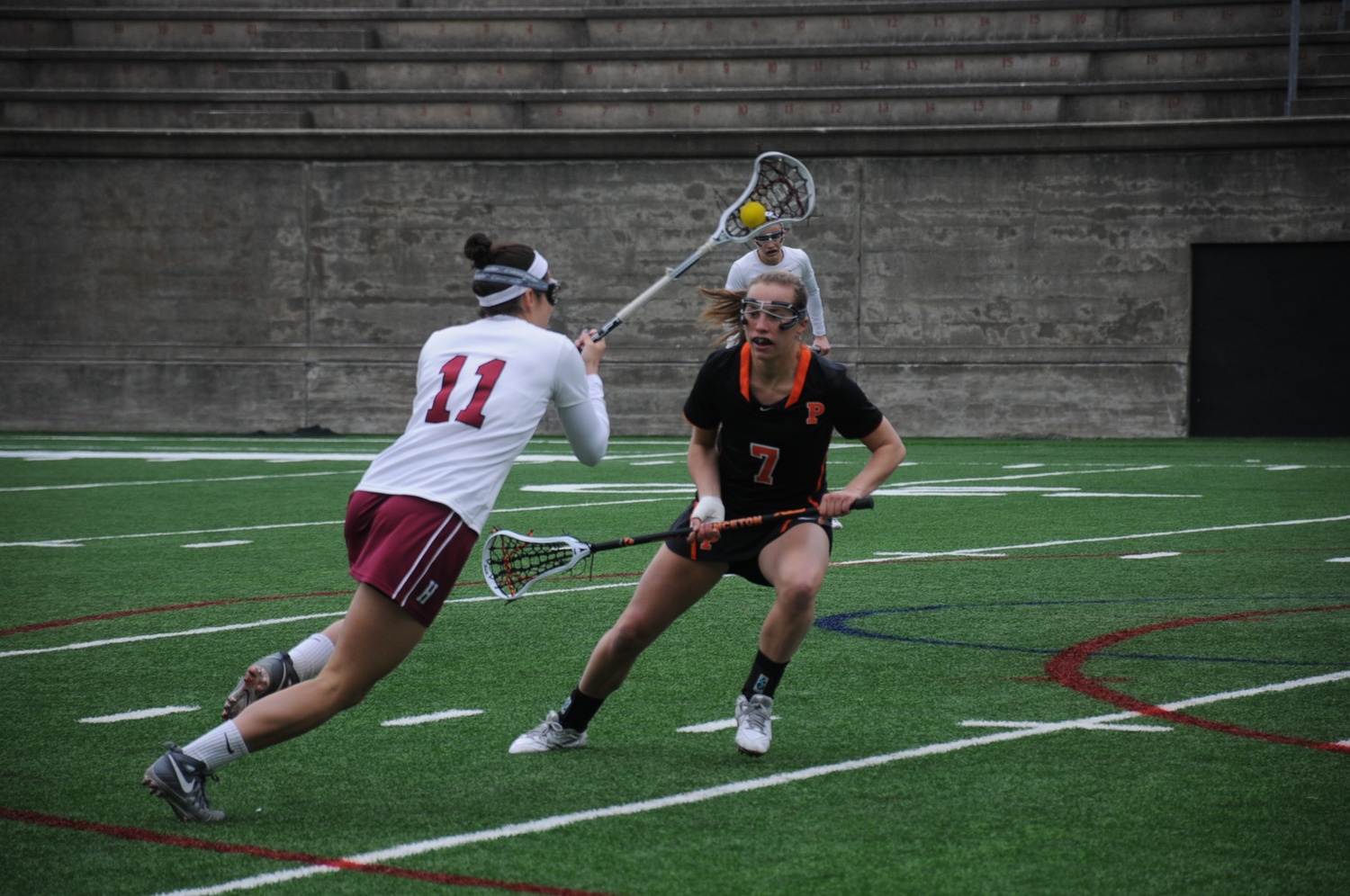 Senior midfielder Alexis Nicolia scored two goals and recorded one assist in the first half of a 12-5 win over UMass Lowell. While the Crimson held a 10-0 lead after the first 30 minues, the River Hawks opened the second period with a 5-0 run to inject new energy into the match and press Harvard. By Hayoung Hwang
By Patrick J. Anderson, Contributing Writer

Coming off a three-game losing streak, the Harvard women’s lacrosse team was in dire need of a win.

As it turned out, the team ended up getting the victory with relative ease.

Facing off against non-conference rival UMass Lowell (1-16, 0-6 AEC) in Lowell, Mass. on Tuesday night, the Crimson (8-6, 3-3 Ivy) rode a dominant first-half performance to a 12–5 victory, picking up some much-needed momentum along the way.

“I think morale was pretty high headed into the game,” said co-captain and midfielder Audrey Todd. “Midweek games under the lights are always fun, so everyone was excited to get out onto the field. That definitely helped our performance because we started the game with a ton of energy and fight.”

Although the final margin was definitive, Harvard struggled in the second half behind a less aggressive display from the offense and an anemic showing from its defense. This combination led to a more stressful final period, as the River Hawks outscored the Crimson 5-2 over the final 30 minutes and reinvigorated a game that had appeared moribund.

But ultimately Harvard’s authoritative play in the first stanza was enough to withsand the rally and carry the visiting team to victory over its one-win opponents.

In the opening half, the Crimson outshone its opponent in nearly every category, winning eight of 11 draw controls, going 10-for-10 in clear attempts, and firing 21 shots on goal compared to one by UMass Lowell. When the whistle blew at the end of the first period, Harvard had tallied 10 goals and completely shut out the River Hawks.

Racking up two scores and four assists, junior attacker Marissa Romeo had a heavy hand in helping the Crimson swiftly establish its 10-0 lead over UMass Lowell in the first half. Senior midfielder Alexis Nicolia also tallied two scores and one assist of her own in the opening period, and the pair scored or set up eight of Harvard’s first 10 goals to put the result seemingly out of reach.

Although Romeo and Nicolia played a critical role in the win, 10 different teammates found the back of the net on the night in a team-wide effort.

Romeo and Nicolia each put away a brace before sophomore attacker Caroline Ashford, Todd, and freshman attacker Nicole Baiocco each chipped in a goal to stretch the Crimson’s lead to 10.

“It was an overall team win today,” said co-captain and goalie Kelly Weis. “Romeo was able to stay in and work the offense, and we were able to rotate some kids in…. [It] was great to have everyone contribute.”

Despite holding a 10-goal advantage heading into intermission, Harvard faltered in the second act. After UMass Lowell had held the Crimson scoreless for nearly 10 minutes of play, River Hawks sophomore midfielder Kaylan DiModugno scored her team’s first goal of the afternoon at 20:53 in the second half.

That finish set off a 5-0 run at Harvard’s expense, a period during which the once-potent attack unit went completely quiet.

Sparked by DiModugno’s finish, UMass Lowell scored four unanswered goals on the Crimson in the final 10 minutes of play to narrow Harvard’s advantage to five, but the comeback bid ultimately fell short.

“I have to credit UMass Lowell for applying more pressure defensively in the second half, but I think we did a good job of handling it and stifling their comeback,” Todd said. “It was a good fight.”

Harvard finally regained its footing in the final two minutes of the contest, as freshman midfielder Caroline Garrity and sophomore attacker Eliza Guild each collected a goal to end the River Hawks’ scoring run. These scores steadied the visitors and secured the win for a Harvard squad in serious need of good news.

“We were working on some different things offensively so we slowed down on shooting,” Weis said. “A couple of things went their way, and as a team UML never backed down. They are a gritty team that will never go away given the chance to come back.”