Men's Lacrosse Looks to Rebound Against Cornell On the Road 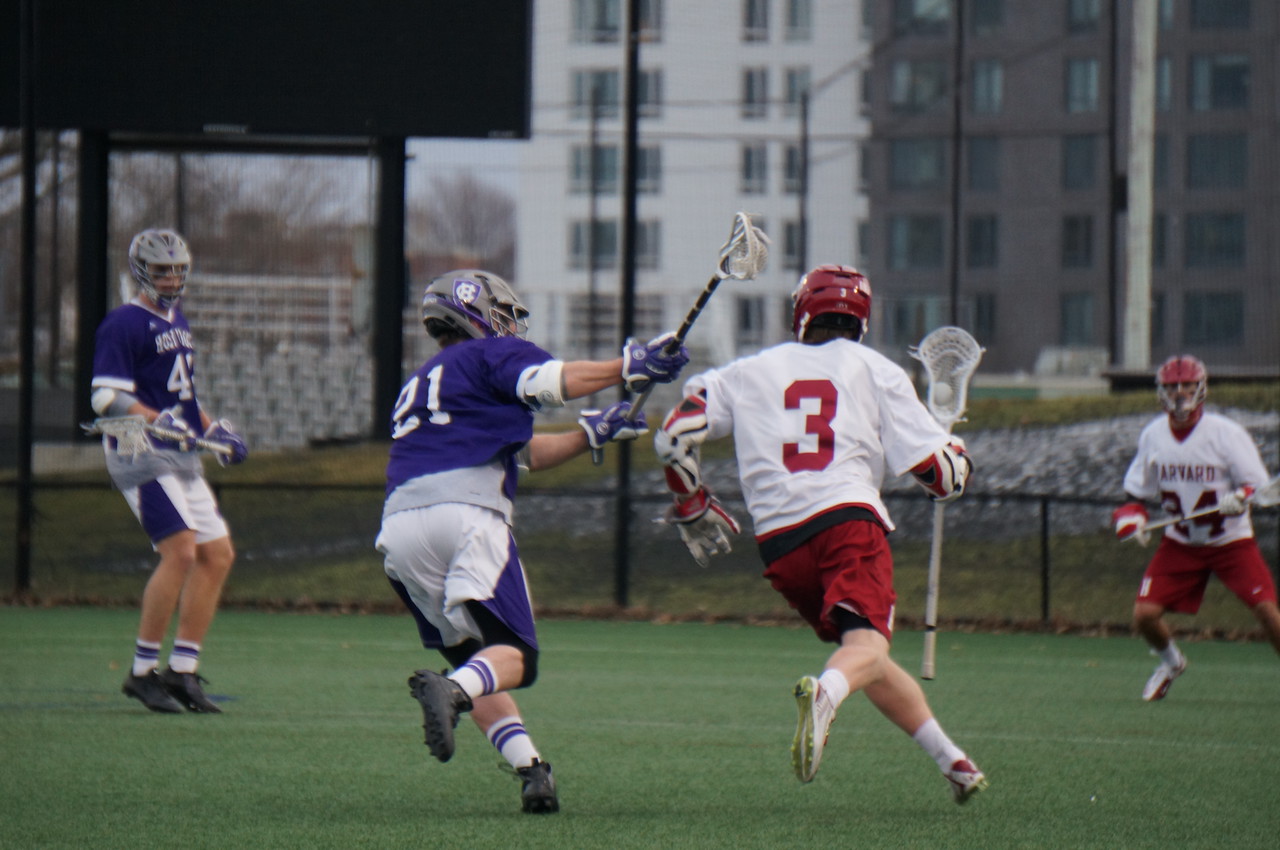 Senior attacker Devin Dwyer, shown earlier this season against Holy Cross currently sits fourth in the nation with a 43 game point streak. He leads the offensive charge for the Crimson with 28 goals on the year, and became the first Harvard player since 2012 to record at least 50 points in a season. By Heather M. Forbes
By Patrick J. Anderson, Contributing Writer

In a game that went down to the wire last Wednesday night, the Harvard men’s lacrosse team (5-5, 1-1 Ivy League) ultimately fell to Albany by a final score of 10-9. This Saturday, after a weekend off, the Crimson looks to rebound from the narrow defeat as it faces off against Ancient Eight foe, Cornell (4-4, 1-2), on Schoellkopf Field in Ithaca, N.Y.

“We’ve started to focus on ourselves and gear up for Cornell,” sophomore midfielder Robert Mencke said. “They have really good attackmen and a good system in play, so this will really make us put that much more into it to make sure we cover all ends.”

Despite a recent string of losses, the Crimson has demonstrated an unwillingness to go down without a fight. While four of the past five games have gone against the Crimson, the defeats were extremely close with the margin of difference hovering between one and three points for each loss.

On the other hand, the squad’s most recent victory against Dartmouth was a blowout as it put away the Big Green, 18-8.

“We really played a good game against Dartmouth,” Harvard coach Chris Wojcik ’96 said. “We did well facing off and we really executed on both ends of the field. Our offense consistently scored throughout the game and our defense was making stops consistently as well.”

The Crimson is placing heavy emphasis on replicating this style of execution, which rested on staying composed, having each player focus on his position’s job, and staying balanced on offense and defense. However, in comparison, the Big Red arguably had an even more impressive showing against Dartmouth. It outscored the Big Green in every quarter and won 19 out of 27 faceoffs, tallying a final score of 19-4.

Looking at the two teams’ overall records and past results, it is likely that this matchup will be a close one. Last year, the Crimson pulled off the victory in a dramatic fashion as then junior attacker Devin Dwyer clinched it with a goal with 32 seconds left in the fourth quarter. After four competitive periods, this game-winner resulted in a final score of 10-9.

The Garden City native, Dwyer, currently maintains a 43 game point streak, the fourth longest active streak in the nation, and has been one of the team’s most dependable players this season.

Meanwhile for the Big Red, freshman attacker Colton Rupp has led the offensive charge, with a team-leading 18 goals on the year. and scores at a 40 percent clip.

With the team’s last game coming on March 30 in the Albany loss, the team has had extra time to prepare for its league opponent.

“Obviously, it’s an Ivy League game against a good program on the road,” Wojcik said. “Cornell is a team that coming off a big win this past weekend. But, we have about 10 days from our Albany game to our Cornell game. We’ve had a lot of time to practice and work on our team playing our game.”

Judging by the formidable offenses of both teams, this game is also likely to be a high scoring affair. Harvard sophomore goalkeeper Robert Shaw will likely match up against Big Red senior Brennan Donville in the opposing net. In his 10 games to date, Shaw has earned a total of five wins for the Crimson and posted a 53.7 save percentage. The more seasoned Donville, on the other hand, has played in 24 games with eight wins and four losses in his career. He currently maintains a 49.1 save percentage.

Another factor that could play a role in the Crimson’s performance is the crowd in Ithaca. Last year’s large turnout at home was highly beneficial for the team, and playing without similar moral support this year may provide an extra hurdle for the skidding Crimson.

Harvard is currently 1-3 on the year in away games, while Cornell has performed well at home, earning an impressive win over current No. 20 Virginia and only losing to current No. 14 Penn State by one goal on its home field.

“It’s going to be a dogfight for sure,” Mencke said. “They’re going to come at us with everything they’ve got.”