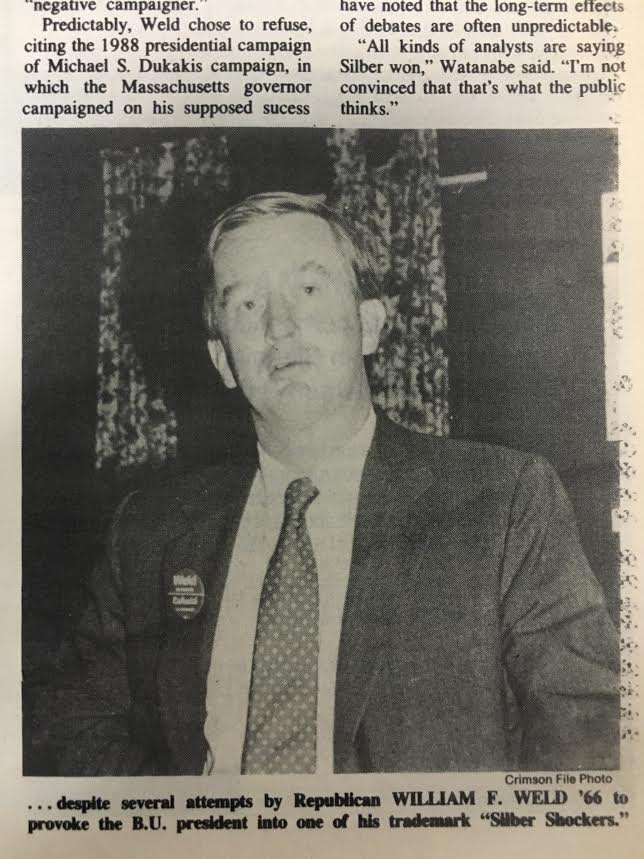 William F. Weld in the October 23, 1990, issue of The Harvard Crimson in the lead up to the 1990 Massachusetts Gubernatorial election.
By Laszlo B. Herwitz, Crimson Staff Writer

Standing in Tercentenary Theatre, William F. Weld ’66 began his Latin Oration for the Commencement of the graduating Class of 1966. A long-standing Harvard tradition in which one graduating senior is selected to give a speech entirely in Latin, the oration is considered among the highest honors a graduating senior can receive.

For Weld, the occasion provided the opportunity for satire. In his speech, titled “De Puellis Radcliffiensibus,” or as it is translated in English, “Radcliffe Women,” Weld sardonically explained how Lamont Library was “the last bastion of Harvard men” to escape the “Radcliffe onslaught.” At the time, women were not allowed in Lamont, and debate raged about whether or not to lift this restriction.

According to friends, this speech, the capstone of Weld’s collegiate career, encapsulated his wit and intelligence.

William F. Weld in the October 23, 1990, issue of The Harvard Crimson in the lead up to the 1990 Massachusetts Gubernatorial election. By Crimson file photo

Before Weld became a two-term governor of Massachusetts, and the 2016 Libertarian Vice Presidential nominee, he was better known to his friends as “Bill,” the clever undergraduate with a biting sense of humor.

“His intellectual and personal confidence raised my eyebrows,” Nicholas B. Deane ’66, a classmate and fellow member of the Signet Society for arts, said. “He expressed it through being pretty sharp tongued about things and people.”

“He was a brilliant fellow but very discrete about it,” Weld’s classmate and fellow Adams resident Francisco R.R. de Sola ’66 said. “He wasn’t someone who would go around trumpeting his incredible intelligence.”

Life of the Party

Outside of the classroom, Weld was highly active in campus social life as a member of the final club the Fly, the Signet society, and the Hasty Pudding Theatricals, an all-male drag troupe famous for its burlesque productions.

While Weld was a dedicated scholar, he, like most college students, wasn’t always perfectly studious. As Mitchell L. Adams ’66, who was the president of the Hasty Pudding Theatricals, remembers, two weeks before senior theses were due, Weld still hadn’t started his.

Still, Weld did not let his role as a “leading lady,” playing the character “Vera Similitude” in the 1966 Pudding Production, “Right Up Your Alley,” get in the way of his academic pursuits. Adams said Weld balanced his responsibilities by writing his thesis underneath the stage during the show in between his scenes.

“I’ll never forget the sight of Bill in between scenes in the Pudding show that spring,” said Adams. “There he was by himself in dress and wig with a legal pad on his lap writing his thesis, which turned out to be a Summa.”

Aris M. Sophocles ’66, also a Pudding cast member, added that Weld was extroverted. Sophocles recalled a particularly vivid memory of Weld, who at that time had bright red hair, enthusiastically participating in the kick line during several Pudding shows.

“He had lots of humor and enjoyed our silliness,” Sophocles said. “He had a lot of fun with the rest of us."

Fellow members of the Fly Club also warmly remember their time with Weld.

“We were all really fond of Bill, he really added alot to the cohesiveness of the [Fly],” Adams said.

Though Weld was involved in a series of extracurricular organizations, he did not participate in any politically-orientated clubs. Several of Weld’s friends were surprised by his postgraduate career choice.

“In college, I can’t recall him being particularly politically active,” Adams said. “It never occurred to me at the time that Bill would go into politics.”

Sophocles echoed this surprise. “I really didn’t think he would go into politics,” Sophocles said. “But, since he did, I’m not at all surprised he became governor.”

De Sola, however, remarked that he always suspected that Weld would pursue a career in politics, a field that would draw on Weld’s theatrical abilities.

“He had that ability to deal with people, a great ability with words, and an aim to make the world better,” de Sola said.

After graduating from Harvard, Weld attended the University of Oxford on a year-long fellowship program, before returning to complete a degree at Harvard Law School. After graduating in 1970,Weld began his legal career as minority counsel to the House Judiciary Committee during the Watergate impeachment inquiries.

In 1981, Weld was appointed United States Attorney for Massachusetts by President Ronald Reagan. He later worked in the Justice Department before being elected governor of Massachusetts in November 1990.

Weld served two terms as governor, before vacating his seat to pursue an appointment by President Clinton as Ambassador of China. After the Senate failed to confirm his appointment, Weld served in various positions within government and, most recently, running as the Vice Presidential nominee for the 2016 Libertarian Party ticket