The Transformation of Devin Dwyer

In the fall of 2012, Devin Dwyer began his collegiate career as one of the highest-rated recruits ever to put on a Harvard jersey. Four years later Dwyer has completed his transformation from one of the Crimson’s most highly touted recruits to one of its most successful and high-achieving players.
Senior attacker Devin Dwyer, shown earlier this season against Holy Cross currently sits fourth in the nation with a 43 game point streak. He leads the offensive charge for the Crimson with 28 goals on the year, and became the first Harvard player since 2012 to record at least 50 points in a season.By Heather M. Forbes
By George Hu

In the fall of 2012, Devin Dwyer began his collegiate career as one of the highest-rated recruits ever to put on a Harvard jersey. If the expectations that came with his National High School Player of the Year award were not enough, Dwyer also had the unenviable task of filling the shoes of prolific attacker Jeff Cohen ’12, the program’s all-time leading goalscorer who had graduated the previous spring.

Four years later, however, Dwyer leaves as he arrived, having completed his transformation from one of the Crimson’s most highly touted recruits to one of its most successful and high-achieving players.

His name has gone from being written in the Top-5 of recruiting lists to springing up in the Top-5 of numerous school records, and in the process, he has left his own shoes to fill.

Of all of Dwyer’s impressive statistical accomplishments, one sticks out to Harvard men’s lacrosse coach Chris Wojcik ’96. It is 49—the number of consecutive games in which the attacker has tallied at least one point.

“More than anything, he [Dwyer] is a model of consistency,” Wojcik said. “The way in which he shows up to play in every game, the way in which he’s up for any situation, is something that has boosted our team countless times.” 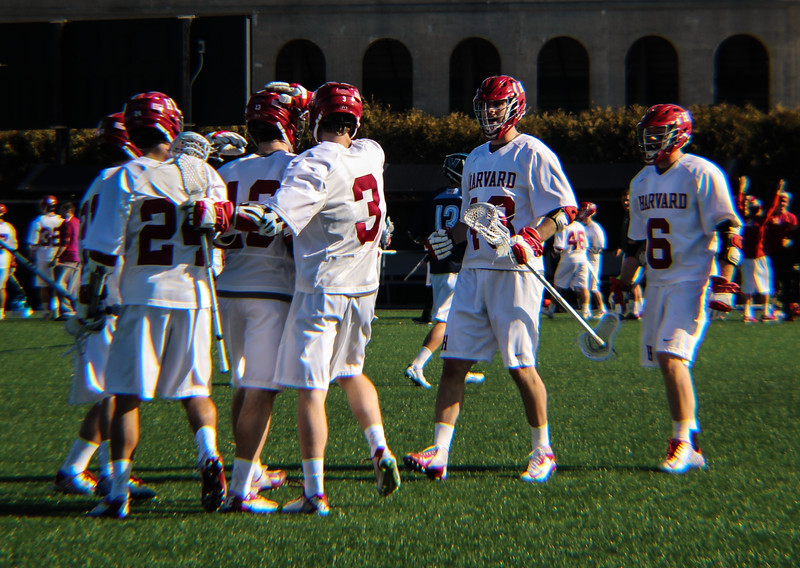 Dwyer quickly established himself as one of the leaders on the team, both on and off the field. By Hayoung Hwang

Dwyer took his streak to another level this year, starting each of the Crimson’s 16 games and collecting at least two points in all of them.

At the beginning of the year, he helped set the tone for his team’s hot start. In the first four games, he reached the seven-point mark two times and added another six-point performance as he led Harvard to a 14-9 neutral site upset over then-No. 4/4 Duke.

Dwyer’s early outbursts placed him in the top-10 nationally in points per game, a distinction he held on to throughout the season.

Perhaps more importantly, two of these early points came in sudden death, overtime situations. Dwyer showed a flair for the dramatic by assisting the winner in double overtime against Holy Cross, and scoring the go-ahead goal himself in overtime against UMass just a few days later.

By the midpoint of the regular season, Dwyer had already set his career high for goals in a season. After tallying 20 in his junior campaign, he scored his 21st as a senior in the seventh game against Brown. He also recorded his 15th assist in that contest, putting him on pace for the second 30-assist season of his collegiate career.

Dwyer then put together a second half just as impressive as his first, finishing with 40 goals and 32 assists in total. His 2.50 goals per game and 2.00 assists per game put him in rare company nationwide, as only Ivy League counterparts Dylan Molloy, from Brown, and Ben Reeves, from Yale, have reached both marks this season as well.

“Devin’s the general out there,” said Crimson co-captain and defender Stephen Jahelka. “When he’s on the field calling the shots on attack, we feel we have a chance to score on any given possession no matter what the situation and no matter who we’re playing.”

For Jahelka, seeing Dwyer’s growth has been extra special because of the bond the two players have shared since childhood. The pair grew up in Garden City, N.Y, where they started playing lacrosse in the third grade. They even suited up for the same local high school team.

While Jahelka has taken full advantage of his frame to dominate as the physical defender he is today, he admires how Dwyer has developed into a different type of player.

“He [Devin] won’t necessarily be the fastest or strongest guy on the field,” Jahleka said, “but his lacrosse smarts are out of this world. He has an understanding for the game that few other guys do, and it’s a beautiful thing to watch.”

The improvements that Dwyer has made to his game over the course of his college career speak volumes to his understanding of the game and his work ethic as well.

By learning from his experiences more so than increasing his physicality, he has steadily built on his point haul every year since joining the program in the fall of 2012.

After tallying 43, 47, and 49 points in his freshman, sophomore, and junior years, respectively, Dwyer exploded for 72 as a senior this season. The 72 points place him in a tie for third all-time in most points collected in a single season by a Harvard player, while the four-year total of 211 puts him in the third spot all-time in career points as well.

“You can tell in the fall when we get the team back together that Devin is one of those guys who always puts in a lot of work over the summer,” Wojcik said. “A big thing is that he loves practicing alone just as much as he loves practicing with other guys or playing games, so he’ll work at his game a lot even when he’s at home.”

Viewers have noticed Dwyer’s development as well, benchmarking his growth with a succession of awards. Dwyer was named to the All-Ivy Honorable Mention list as a freshman, earned Second Team honors last year, and was a First Team selection in 2016.

He was also nominated in the preseason this year for the Teewaaraton Award, and remained on the watch list for the honor throughout the season as he lived up to expectations.

The biggest honor that Dwyer has received this year, however, might be the fact that he was selected in the Major League Lacrosse draft. He was the sixth round pick, at spot No. 46, of the Florida Launch, and has the option to play in the league after college. The Launch, who have started the current MLL season with a 0-4 record, will hope that Dwyer can help make a difference.

Until then, however, Dwyer can reflect on a 2016 season, and collegiate career, as successful as any that a Crimson player has had.