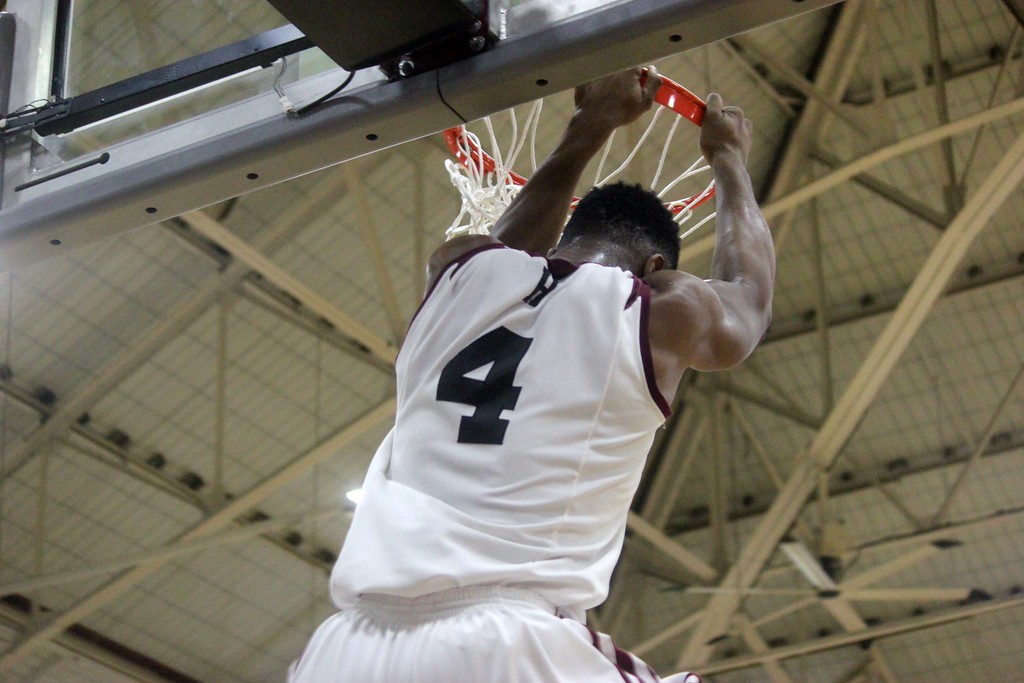 Junior forward Zena Edosomwan, shown Nov. 13 against MIT, led Harvard in points and rebounds this season, falling just four rebounds short of a double-double average for the year. By Lauren A. Sierra

After being one of the most sought after recruits in history for the Crimson, Edosomwan put up less than impressive numbers his first two years with the team, though he turned his game around this season and averaged 13.1 points a game.
By Theresa C. Hebert

“It’s the best school in the world, the basketball is building, and I want to be a part of that—I want to make history there,” the then-high school senior told The Crimson in March 2012.

Edosomwan’s road to Harvard subsequently took a detour; in order to qualify for the department’s academic standards, he had to take a fifth year at prep school Northfield Mount Hermon. For a top-100 recruit who received scholarship options from nearly 40 schools, Texas and UCLA among them, it was an unusual choice.

When he finally arrived in Cambridge in the fall of 2013, however, his statistics left something to be desired. The Los Angeles native averaged 2.9 points in just under six minutes per game during his freshman year. In his sophomore campaign, Edosomwan continued to underwhelm—though he doubled his minutes, he averaged just four points per game. Playing behind a deep, upperclassmen-heavy frontcourt led by Steve Moundou-Missi ’15 and Jonah Travis ’15, Edosomwan was forced to fight for playing time.

But this season, in his third time around, Edosomwan exploded. As a core member of the starting rotation, he averaged 13.1 points and an Ivy League-leading 9.9 rebounds per game, finishing just four rebounds shy of averaging a double-double on the season.

“I was really pleased and proud of seeing Zena make steps [and] make the improvement in more than anything—gaining the confidence to become a marquee guy,” Harvard coach Tommy Amaker said in a March postseason press conference.

Before the season, Amaker described Edosomwan’s previous body of work as “jumpy,” noting that he “sometimes tries too hard.” However, an offseason of work allowed the 6’9’’ forward to develop stronger post moves that allowed him to shoot at a higher percentage, sinking shots at a 10 percent better clip than in 2014-2015.

Just as important as the improved shooting was the poise he showed. Edosomwan flashed refined passing skills as a junior, registering six games with at least four assists.

Edosomwan put his offseason progression on display in the season-opening exhibition against McGill. He recorded 21 points and 11 rebounds—the first double-double in a season filled with them. The center’s 12 double-doubles tied a program record, and this performance included five 15-plus rebound efforts.

With Edosomwan anchoring the paint, Amaker focused the offense on playing inside-out, forcing the defense to collapse in on his powerful center and open up space for strong outside shooters such as freshman guard Corey Johnson and junior sharpshooter Corbin Miller.

“Having Zena going really opens up things for our shooters,” freshman Tommy McCarthy said following the McGill exhibition. “[H]e’s such a threat down low [and] he attracts so many guys that it’s easy to kick it out in wide open shots. It’s nice to have kind of a safety net. When you get in trouble, you can throw it in to him, and he’ll usually do something good with it.”

Edosomwan shone brightest on Christmas Day at the Diamond Head Classic tournament championship game in Honolulu, when the Crimson faced off against then-No. 3/2 Oklahoma. Despite Harvard’s eventual loss, Edosomwan put up a career-high 25 points along with 16 rebounds, earning a spot on the All-Tournament team.

“I just wanted to be aggressive,” Edosomwan said after the loss. “My teammates were finding me, and honestly, I don’t fear anyone. I want to play the game, and I think they should fear me.”

Edosomwan’s importance to the team was felt when a left leg injury consigned him to the bench just eight minutes into the second half of a Jan. 30 contest versus Columbia. With Edosomwan out for the remainder of the second half, the Lions outscored the Crimson 38-21 in the period and snagged a 55-54 win.

The following weekend, he remained out of the lineup during a pair of road losses to Princeton and Penn. But later, with Edosomwan back in the lineup for home matchups against the Killer P’s, Harvard won both games as the Los Angeles native averaged 13.5 points and 12 rebounds, earning Ivy League Player of the Week honors.

It wasn’t just Edosomwan’s offense that the team missed during those games, however. Besides leading the team in scoring, Edosomwan received consistent praise from Amaker for his defense and ability to force opposing teams out of the paint.

“He’s an enforcer kind of player for us on the [defensive] end,” Amaker said after the Princeton loss. “I mean, it’s not comfortable or easy for the guards to drive it in there if he’s in there.”

Despite his improved play this season, Edosomwan certainly has room to grow. His most glaring fault lies in his inability to hit free throws, as he shot a better percentage from the floor (50.3 percent) than he did from the charity stripe (49 percent), even though his 153 attempts led the team.

At one point, he even noted that he favors dunks over layups because it guarantees at least two points if he misses his free throws.

“My mentality was just to go up and try to dunk it,” Edosomwan noted after a Feb. 20 road win over Cornell. “If I’m not going to make free throws, then let me get and-ones.”

With his growth, Edosomwan became a target for opposing teams. Going into his senior season, the scouting focus on Edosomwan will only increase.

“[Scouting reports say] to limit you, to frustrate you, or whatever because you’re the marked guy,” Amaker said. “You have to work hard. Whatever you’ve done to get to this point is not going to be good enough to get wherever you need to go at the next point. I think that’s the message that’s necessary.”

Staff writer Theresa C. Hebert can be reached at theresa.hebert@thecrimson.com.