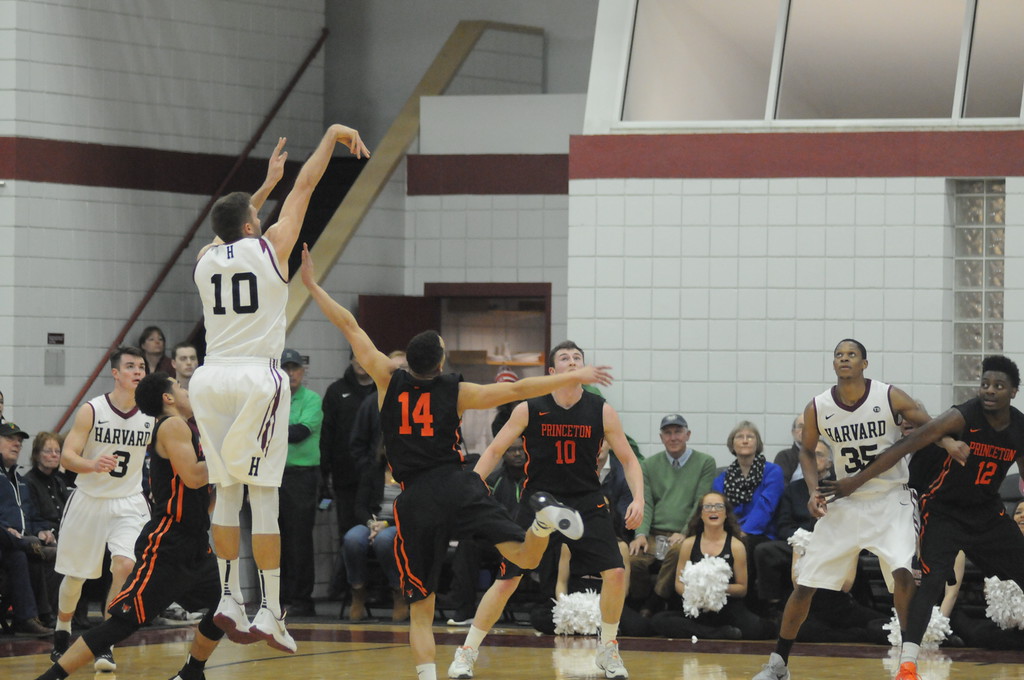 Senior Patrick Steeves, shown in against Princeton March 4, played his first career-minutes this season after battling injuries during his first three years with the Crimson. By Michael Shao

Sitting out due to injury his first three years on the team, Steeves roared back senior year, becoming a leader on the court and averaged over 12 points and three rebounds a game.
By David Freed

As the clock wound down in a tie game against Princeton, senior Patrick Steeves looked over to the sidelines. His Crimson had led nearly the entire second half against a Tigers team that had whipped Harvard earlier in the season in an authoritative 19-point dismissal.

By the bench, Harvard coach Tommy Amaker gave a signal Steeves had not seen all year. The play, four-deep, called for his teammates to run to the corners, leaving Steeves in an isolation play against Princeton’s best wing defender, Steven Cook. The junior got in his grill as Steeves waited.

With just over 10 seconds left on the clock, Steeves made his move: a quick dribble right and a dash into the paint. Unable to catch up, Cook hit his arm—a foul Steeves would later comment that “you could hear from the rafters.” The two subsequent free throws, his 24th and 25th points of the night, provided the winning margin, with a Steeves block at the buzzer sealing the win and putting the stake into Princeton’s tournament hopes.

“I don’t know how to put [the feeling] into words, to be honest,” Steeves said.

Before the season, to envision Steeves with the ball as the clock wound down would have been farcical. The senior had not played a single minute in his first three years on campus. As a freshman, he had impressed at Crimson Madness, looking like the brightest talent on a court with six future All-Ivies, but injuries had consigned him to the bench.

The first was a stress fracture in his foot that put him out for three months. He would watch his teammates upset New Mexico in the NCAA Tournament—Harvard’s first-ever March Madness victory—from the stands. Of small consolation: his skill set was eerily similar to that of graduating senior Christian Webster ’13, whose steady hand and ace three-point shooting had been pivotal in the four-out Harvard lineup that had won the Crimson the league title.

Steeves never had a chance to compete for a replacement role. Hurt in another preseason scrimmage, he received the bad news immediately: ACL tear. Season over.

“That day I completely broke down,” Steeves told WBUR in January. “Because with the foot you at least have a little bit of hope to get back for that season. With the ACL, it’s just, ‘Thanks for showing up. See you next year.’”

The knee never healed that year or the year after, as a shooting-bereft Crimson squad barely squeaked out its fifth league championship. A healthy Steeves might have been the drive-and-shoot stretch four that the team needed, but injuries kept him on the bench all year.

A year later, he was penciled in as a footnote by most pundits. In Harvard’s season-opening scrimmage, he did not even make the court. A week later against MIT, the Lavietes Pavilion crowd cheered with the team as Steeves entered the contest, but the senior’s contributions (one point, one rebound) were nothing to write home about.

It didn’t take long for that to change. After three straight DNPs, he got 12 minutes against Bryant, chipping in eight points, three rebounds, and three assists. A game later, with the starters sleepwalking through the first half against Holy Cross, Amaker put Steeves in. The result was a revelation: two threes, 12 rebounds, and seven assists in 26 minutes.

“I thought Pat was our bright spot today,” Amaker said after the game. “... For Pat to be our best playmaker, that says a lot for him.”

The Holy Cross game provided a template for what Steeves would become—the Crimson’s jack-of-all-trades. On offense, the senior ranked among the team leaders in assists and scoring while leading the Ivy League in three-point percentage. While turnover-prone, he created offense on a team desperate for it.

“He was the guy we really went to and leaned on,” Amaker said after the BYU win. “He did a terrific job for us throughout the game... I thought his play was very much needed for us to come out with the W.”

Ivy League play was not nearly as rosy. After putting up 20 points in the first game against Dartmouth, Steeves had 10 combined in the next four—all losses. After a loss to Penn that gave Harvard nearly as many Ivy League defeats (five) as they’d had in Steeves’s first three years on campus (six), the senior was defiant, noting that “we are going to play all these teams again.”

Steeves’s play bore out his point. Harvard closed the year winning four of the final five rematches, sweeping Princeton and Penn to avenge its earlier struggles. During the revenge tour, Steeves averaged over 12 points and three assists a game—generating more offense than any member of the team.

Other teams took notice: After filing to get extra eligibility with the NCAA office, Steeves signed an agreement to play his postgraduate season at George Washington while he pursues an M.B.A.

As his own coach said after the year ended: “I don’t think anyone would have foreseen the story of Patrick Steeves.”

Staff writer David Freed can be reached at david.freed@thecrimson.com.