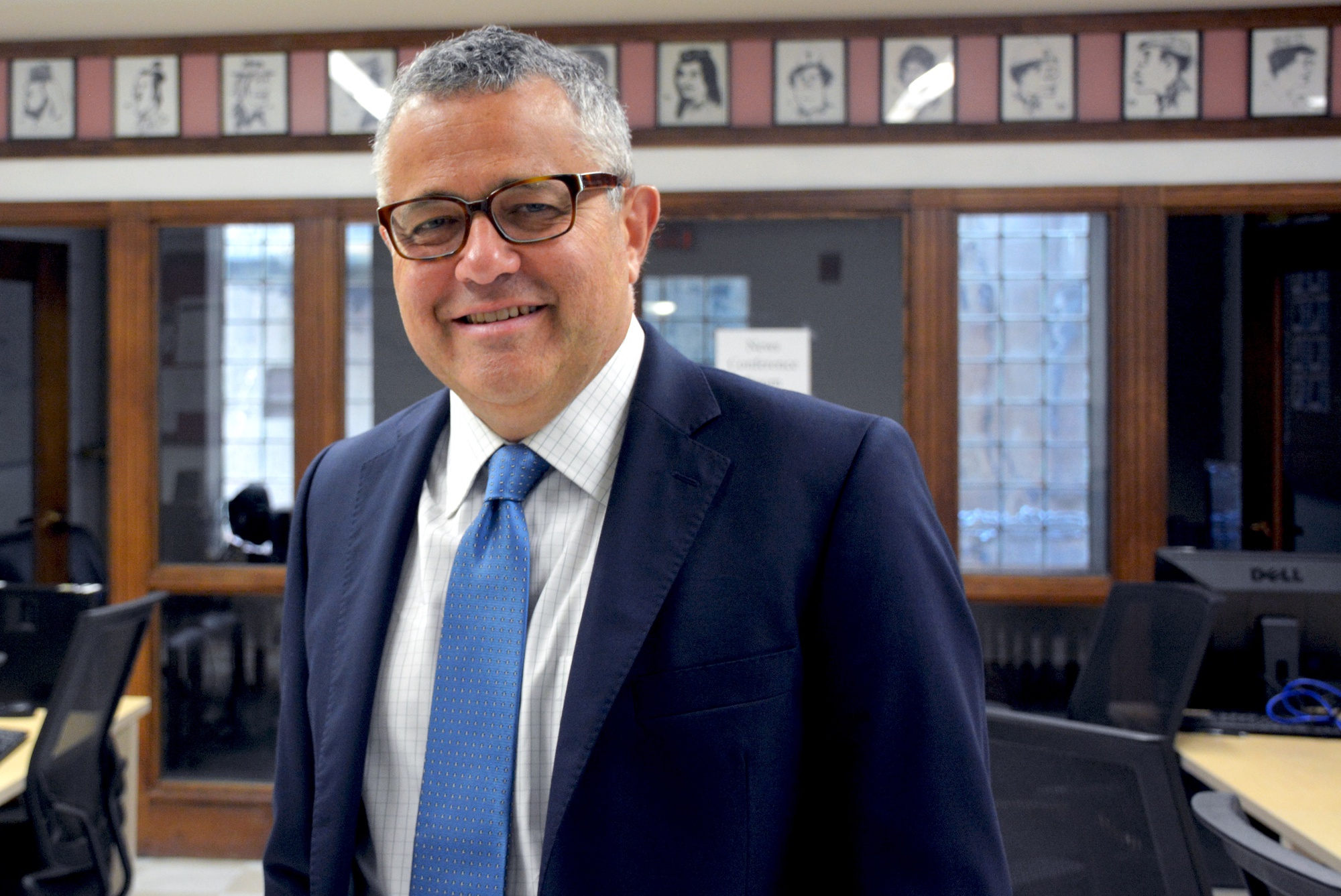 Toobin swung by the Harvard Crimson to talk about his new book, “American Heiress: The Wild Saga of the Kidnapping, Crimes and Trial of Patty Hearst," his reporting process, and the profession of journalism.
By Brandon J. Dixon

Jeffrey R. Toobin ’82 recently visited the Harvard Book Store for a book-signing of his latest book, “American Heiress: The Wild Saga of the Kidnapping, Crimes and Trial of Patty Hearst.” Just before attending the event, Toobin chatted with Fifteen Minutes about the book, his reporting process, and journalism. Toobin is currently a staff writer at the New Yorker and a legal analyst for CNN, the author of six books about topics like the Supreme Court, the O.J Simpson trial, and the Florida election recount of 2000. As a Harvard student, he wrote a sports column for the Crimson titled "Inner Toobin."

This interview has been lightly edited for clarity and concision.

Fifteen Minutes: Where did you get the idea to write a book about Patricia Hearst?

Jeff Toobin: It’s the first book I’ve written that is at the border of journalism and history. All my other books had been very clearly works of contemporary events—events that I covered in real time, whether the Supreme Court, or the O.J. Simpson case, or the recount in Florida. These were all events that I covered as they were unfolding, and then wrote a book about them. But Hearst is very different. I was alive, but I was a kid and had no journalistic connection to the story.

I wrote an article for the New Yorker—where I am a staff writer—about a gang in Baltimore that took over a local jail. I got interested in the history of this gang, which was called the Black Guerrilla family. It was founded by George Jackson, who a famous radical prisoner in California in the 70s. I got interested in the prison movement, which was a big part of the counterculture in San Francisco, and in California. After the Attica Riots, the idea that prisoners could be a vanguard of the revolution was an idea that was really out and about. I started looking into that. The Symbionese Liberation Army also came out of the prison, so the root of the story was through the California prison movement.

FM: How’d you go about reporting this story?

JT: When I started, I didn’t even know how many of the people involved in the events were still alive. Forty years is a long time. I was pleasantly surprised by how many not only were still around, but were willing to talk about it. I think people have a different perspective on talking about events 40 years later, when they are not so wedded to the controversies of the moment. They can be a little more reflective about it. But the real turning point in my reporting was when I found out that Bill Harris—who was one of the very few survivors of the SLA—had assembled this enormous collection of materials about the SLA— about 150 boxes. His plans to sell those materials to a university which had fallen through, so I bought them from him. And I got these150 boxes of materials that had never really been looked at before by a journalist, and that was really the goldmine of research for my book.

FM: Do you think the Patty Hearst story is something that young readers can resonate with?

JT: The challenge for me is to intrigue readers who have no firsthand memory of the experience. I think college students in particular may find it of interest because it’s about a 19-year-old college student who gets kidnapped, and the mystery at the heart of the story is whether she was coerced into becoming a SLA member or voluntarily joined the SLA. It’s about a historical period, the 70s, but it’s also a mystery story about one woman—what was going on inside her head, and what made her do what she did.

FM: Can you see yourself continuing to write story like "American Heiress" again—something that weds history with journalism?

JT: I don’t think I could ever write a book that is pure history, in the sense that all the people are dead. I am a working journalist, and what I like to do is interview people... I could see going back to a story like this that is decades in the past, but not scores of years in the past.

FM: Can you walk me through your writing process for a book like this?

JT: I actually have a very simpleminded approach to writing, to writing books. I can’t write a book and be a New Yorker staff writer, so every time I have written a book, I have taken a leave from the New Yorker… and when I do, I write five pages a day... I am fastidious about keeping up that pace, because the single easiest thing to do on earth is not to write, and I don’t believe that writers work best when they are “waiting for the muse” to inspire them. I believe writers work best when it's a job and they meet deadlines, and approach their work methodically. … The five pages a day, I found, is small enough to be manageable, small enough that I can actually complete it each day, but big enough that it adds up at a reasonable pace—25 pages a week, 100 pages a month.

JT: When I’m writing for the New Yorker, I write less—I don’t have that quota, because my deadlines are different, and the pieces, while they’re long by magazine standards, are not book length. The general process is the same and the general idea is the same, which is that the reporting is as or more important than the writing. I think writers focus too much on the writing process, and not enough on the reporting process. If you have interesting material, you’ll be able to write about it in an interesting way. If you are the greatest stylist in the world, and you have nothing to tell people, it’s irrelevant. So to me, the reporting process, which can be difficult and tedious and time-consuming, is really where the most important work gets done. When someone comes up to you and they talk about something you wrote, they don’t say ‘Wow, that was a great sentence.’ They say, ‘Wow, what I read was amazing.’

FM: Were you always interested in going into journalism?

JT: No. Both my parents were journalists, and I grew up with them telling me that it was a mercurial and difficult business. My mother, Marlene Sanders, was one of the pioneering women television correspondents. My dad, Jerome Toobin, was one of the founding fathers of public television news. Though they didn't actively discourage me, they also did not encourage me to go into journalism.

So, I always did student journalism. I spent most of my undergraduate career at The Crimson. I was in what was then called South House, now Cabot House. It seemed horrible. Once I was actually there, it was pretty pleasant, but t was really far away. The Crimson was my home as an undergraduate, but I thought, ‘Okay my parents are journalists, I’m going to be a lawyer.’ Well, I did go to law school. I clerked for a judge, and then I worked on the Iran Contra Investigation, which was a big deal at the time, and I decided to write a book about it. That was my first book. I was quite young, and then I became a federal prosecutor in Brooklyn, thinking that the book was a one-off thing.

But then Tina Brown got hired as the editor of the New Yorker, and I had the opportunity to give it a try there. I did, and then within a year of my arrival at the New Yorker the O.J. Simpson case happened, and that changed my life completely. I feel like my genetic destiny kicked in, that I was surrounded by journalism, and I became a journalist.

FM: Do you find a lot of overlap between the legal profession and journalism?

JT: I would say there is overlap, especially because of the kind of journalism I do. My niche has been writing about law. Law is a broad topic. It can include all sort of things. It can include constitutional law, which I explored when I wrote about the Supreme Court. It can include criminal law, which I explored when I wrote about like Patty Hearst. I feel like what I can contribute is that I can take legal complexity and translate it into English, and write about it in a way that is comprehensible and interesting.

I think it’s always a good idea to have something that you know a lot about. It doesn’t have to be law. There are journalists who are very good at writing about science, and they have a grounding in science. I do think, especially today, where general interest journalism is a troubled area, having some specific skill and interest area is probably a good idea.

FM: What do you mean by that?

Newspapers are in terrible economic trouble. I think people planning their careers should think about where their chosen business is going. I’m not saying you can predict with certainty what will exist, what will thrive, and what won’t, but there are certain trends that are very clear. General interest newspapers, especially mid-sized papers such as the Hartford Courant and the Cincinnati Inquirer, are desperately troubled. The web has also created journalistic opportunities, at outlets such as Bloomberg News, Vice, and the Huffington Post. Still, I think it’s a perilous time for journalism now.

I think the most important thing you can do as a young journalist is to just do a lot of whatever you’re doing. Write a lot, shoot a lot of video, use the web in various ways. One thing that’s clear is that the categories that I grew up with are breaking down. Television journalism, print journalism-- everything is starting to merge together. You have to be able to communicate using words, pictures, video, and audio. I think that’s a big difference from what journalism looked like when I was coming up.