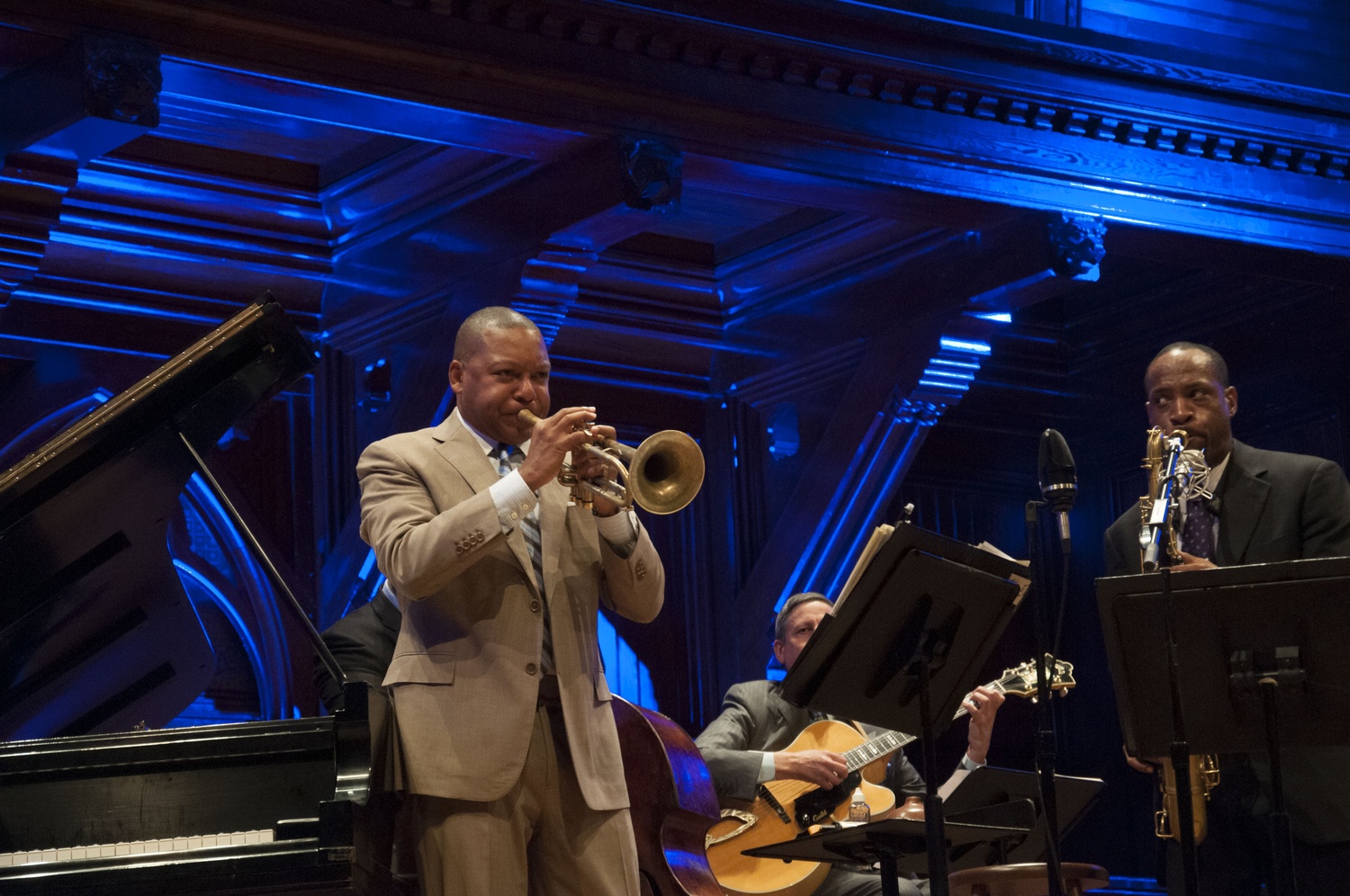 Wynton Marsalis performs a portion of his Pulitzer-winning jazz oratorio “Blood on the Fields” in Sanders Theatre on the opening night of the Nieman Foundation’s centennial celebration of the prize. Marsalis alternated between performing and speaking to how the celebration’s themes, power and accountability, were raised in his work. By Sidni M. Frederick
By Brittany N. Ellis, Crimson Staff Writer

Some of journalism's biggest names commanding the nation’s most pressing news stories, along with dozens of renowned writers and artists, flocked Sanders Theatre this weekend for a star studded celebration of the Pulitzer Prize’s 100-year anniversary.

Hundreds came out for the event, which the Harvard Nieman Foundation for Journalism coordinated. Ann Marie Lipinski, the organizations Curator and a Pulitzer-winning journalist herself, opened the centennial event Saturday evening, reflecting on the history of the Pulitzer award, the accomplishments of its recipients, and the prize’s “rare position in our cultural landscape.”

University President Drew G. Faust, a 2009 Pulitzer finalist for her widely acclaimed book on the Civil War, followed Lipinski and introduced Wynton Marsalis, the first jazz musician to receive a Pulitzer and the night’s main speaker. He spoke about his award-winning jazz oratorio “Blood on the Fields,” which tells the stories of two enslaved people and their journeys in and out of freedom. He punctuated his speech with joking anecdotes, lessons on the fundamentals of jazz and of life, his own performances with his band.

“Like our Constitution, music calls us to use reason and compromise in pursuit of harmony. It shows us how to balance freedoms with responsibilities, how to seamlessly transition between leading and following, and how to rely on instinct and training to find, nurture and maintain the common ground,” Marsalis said.

Journalists Sara E. Ganim and Sacha Pfeiffer spoke in a moderated conversation about their work reporting on sex abuse scandals. Pfeiffer, a member of the Boston Globe’s Spotlight team that exposed decades of covered-up abuse in the Boston Catholic diocese, emphasized how “systemic and systematic” abuse of power can be.

New York Times executive editor Dean P. Baquet moderated a heated discussion with Washington Post reporter Bob Woodward and documentary maker Laura Poitras focusing on abuses of government power, the future of journalism, and the responsibility of journalists. Woodward received a Pulitzer for his reporting of the Watergate scandal, as did Poitras for her coverage of disclosures of the National Security Agency’s surveillance programs that Edward Snowden leaked.

Other speakers included war photographer Stan Grossfeld, and cartoonist Mark Fiore. Writer Junot Díaz read a selection from his book “The Brief Wondrous Life of Oscar Wao,” which explores familial and national life in a country under dictatorial rule.

The day’s programing also featured a videotaped interview between Lipinski and “Hamilton” playwright Lin-Manuel Miranda, who reflected on the ability of the arts to tell stories of power and find one’s voice.

Miranda’s interview was a highlight for Aidan M. Fitzsimons ’20, one of a handful of students at Sunday’s event.

“The opportunity to see famous speakers and minds who have hot takes on the broader themes of power is something you can’t miss,” he said.

The event ended with a performance of “The Transmigration of Souls,” which composer John C. Adams ’69 wrote to commemorate the victims of the terrorist attacks on Sept. 11, 2001.

The weekend, entitled “Power: Accountability and Abuse,” was the last of four events held throughout the country over the last year to celebrate the Pulitzer’s centennial. In an interview, Lipinski emphasized how appropriate it was for Harvard and the Nieman Foundation to host the discussion on power and its responsibilities.

“I think every issue that we’ve heard addressed are issues that are at the core of someone’s research here at Harvard,” she said. “They’re about the same questions we are asking as a campus, as a nation.”