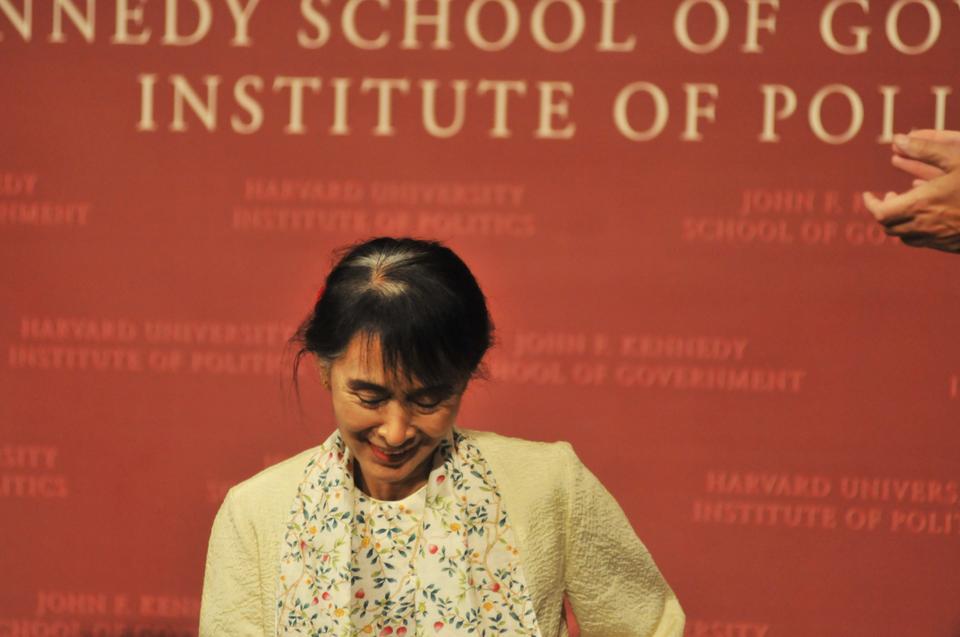 The Harvard Foundation named Nobel laureate and Myanmar leader Aung San Suu Kyi its 2016 Humanitarian of the Year in a ceremony Saturday, while students from the Harvard Islamic Society stood outside to protest what they consider her silence toward the country’s persecuted Muslim minority.

Suu Kyi, elected head of Myanmar’s government in April, was placed under house arrest in 1989 for protesting against the country’s dictatorship and served 15 years in detention. During her early years, Suu Kyi was held in solitary confinement and could not see her husband Michael V. Aris—at the time a visiting professor at Harvard—or her two sons. In 1991, Suu Kyi was awarded the Nobel Peace Prize for her "non-violent struggle for democracy and human rights."

Aung San Suu Kyi spoke about the development of democracy in Burma at the John F. Kennedy Jr. Forum in 2012. By Jessica C. Salley

In her speech to a packed Science Center lecture hall, Suu Kyi discussed overcoming fear and the need for national reconciliation in Myanmar.

“I believe that fear is at the root of all division. Because fear leads to hatred, and hatred leads to division,” she said.

The Harvard Foundation bestows its Humanitarian of the Year honor to “an individual whose works and deeds have served to improve the quality of our lives and have inspired us to greater heights,” according to its website. Past award recipients include Pakistani activist Malala Yousafzai and United Nations Secretary General Ban-Ki Moon.

“She has dedicated her life to peace and reconciliation,” Harvard Foundation Director S. Allen Counter said at the event.

Diana L. Eck, faculty dean of Lowell House and professor of Comparative Religion and Indian Studies, took to the lectern to reflect on the years Aris, a Tibetan scholar, was part of her department and lived with his sons in Quincy House.

Eck also acknowledged the protesters—a group of about 10 people standing silently outside the Science Center while the event occurred—saying “no one more than [Suu Kyi],” a lifelong protester herself, would appreciate and empathize with their protest “on behalf of the Rohingya,” which the United Nations considers among the most persecuted minorities in the world.

The protesters, some of whom were undergraduates, carried posters urging Suu Kyi to “earn” and “live up to” the award by “stand[ing] up for the Rohingya.” The Harvard Islamic Society had last week criticized the Harvard Foundation for its selection of Suu Kyi as its Humanitarian of the Year.

Master’s student and Harvard Islamic Society member Mushfiqur Chowdhury, one of the protesters at the event, said, “What we want is for Aung San Suu Kyi to come away from this event thinking about the principles that she stood up for—the reasons that she got the Nobel Prize—and be able to speak for the populations and the marginalized groups that she claimed to represent before she was elected.”

In a statement issued before the event, Counter wrote that a protest would be “hurtful to our Burmese/Myanmar students and improper.”

Chowdhury called the decision to protest “complicated” because the students did not want to disrespect the Foundation, given that it supports the Islamic Society. Minutes before doors opened to the event, students decided against disrupting the speech.

Both Counter and Eck directly referenced the Rohingya in their speeches, but Suu Kyi did not. In May, she asked a U.S. ambassador to not use the term, and banned its use among her officials, supposedly to support the reconciliation process in Myanmar that she is overseeing.

“I’m very proud of the fact we are a nation of many peoples, and of many religions, and I’m sad that in latter years we have had communal problems in our country such as we have never had before,” Suu Kyi said, citing the nation’s 135 ethnic groups.

Hundreds of people attended the event, which was also simulcast in a lecture hall next door.