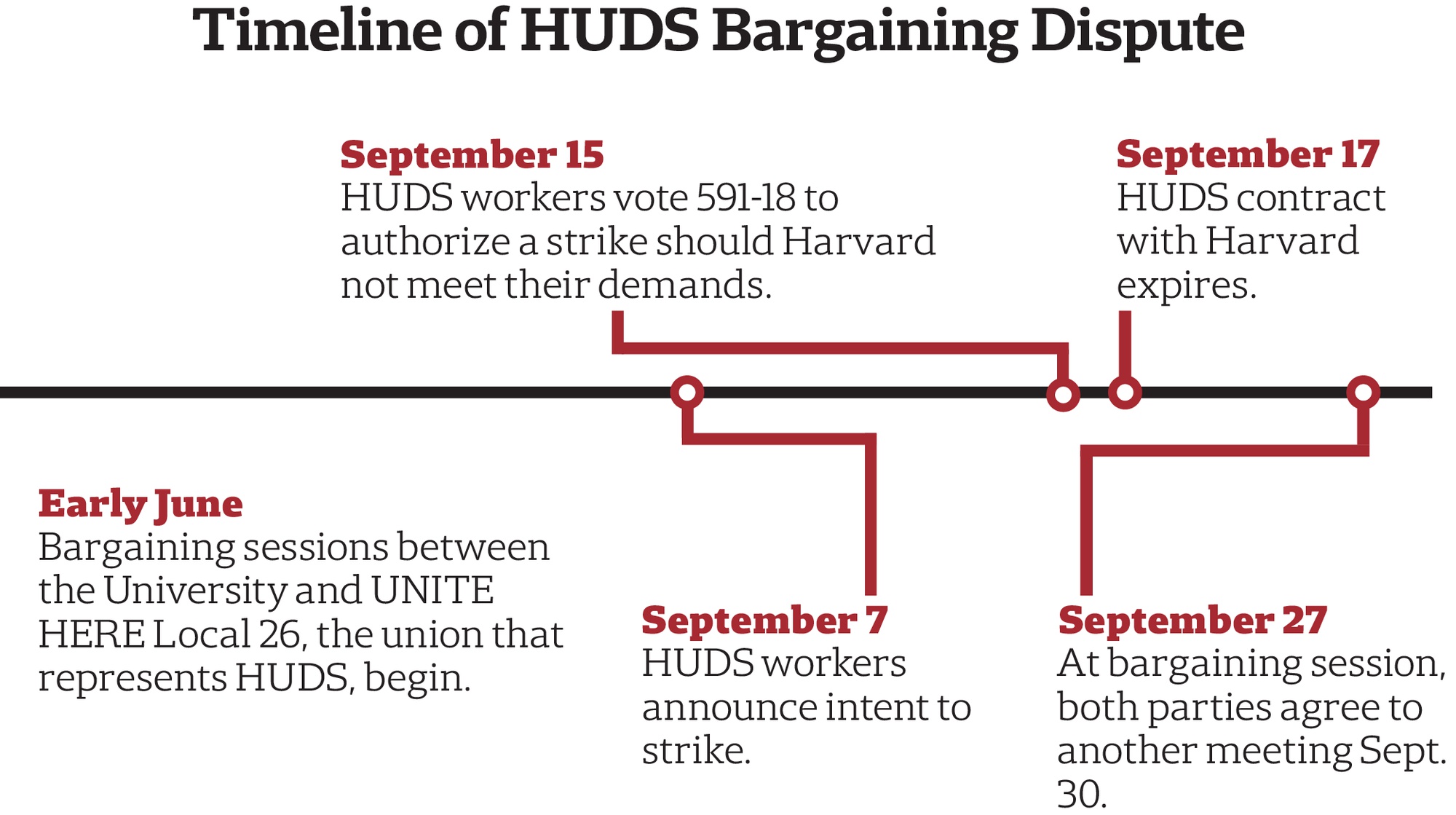 Though a day-long bargaining session between Harvard and its dining services workers Tuesday did not yield a contract settlement, HUDS has not yet announced it will strike and instead will continue negotiations with the University.

Michael Kramer, the lead negotiator for UNITE HERE Local 26—the Boston-based union that represents Harvard’s dining workers—said at an event on Sept. 16 that the union would strike if a “just settlement” was not reached by Sept. 27. At the time of his announcement, Tuesday’s bargaining session was the last meeting scheduled between the two parties.

Harvard and representatives from the union will meet for another bargaining session on Friday.

The union’s last contract with the University expired on Sept. 15, after it was extended from mid-June. Tuesday’s session marked the 16th official meeting between the two parties in the more than three-month long bargaining stalemate between the two parties. A federal mediator attended the session to facilitate the contract talks.

Both sides met at the Sheraton Commander Hotel Tuesday morning to hammer out the details of a new contract and did not finish until around 7 p.m. Though Local 26 characterized the session as unproductive, Harvard spokesperson Tania deLuzuriaga wrote in a statement that the two sides made “some progress,” but noted that there is “still work to be done at the table.”

“Harvard continues to negotiate in good faith with Local 26 and we hope to reach a fair resolution that recognizes the contributions of dining hall workers while supporting the University’s core mission of teaching, learning, and research,” deLuzuriaga wrote.

Tiffany Ten Eyck, a Local 26 spokesperson, wrote in an email Tuesday evening that the union believed the negotiators did not make progress. She did not elaborate on whether HUDS will strike should the next session not result in a contract.

HUDS workers have demanded that the University offer year-round work to interested employees and that, for those employees, Harvard establish a “minimum guaranteed salary” of $35,000 annually. The majority of Harvard’s dining workers are not employed during the school’s recesses, and cannot draw unemployment benefits during those times.

“We have asked for two simple things from this great university: to maintain our health care as is, and to be able to earn at least $35,000 a year for those of us who wish to work year round,” Ten Eyck wrote. “Harvard administration continues to refuse.”

According to deLuzuriaga, the University has “put wage increases on the table and proposed modest changes to health insurance.” She did not specify what such wage increases would look like.

At the offset of the negotiations, the University offered an identical health benefits package to HUDS as that negotiated last winter by its largest union, the Harvard Union of Clerical and Technical Workers. Another campus union, the Area Trades Council, has since agreed to enroll in the same health care plan.

Besides an altered health benefits package, workers have also called for a 22 percent wage hike over the next five years. Past contracts with the union, deLuzuriaga wrote, have been settled at around 2.5 or 3 percent annual increases.

Data from the Bureau of Labor Statistics—a federal agency that aggregates information like average wages for occupations—from May 2015 indicates that the annual mean wage for food preparation and serving-related occupations in the Boston metropolitan area is $27,690. DeLuzuriaga wrote that HUDS workers make, on average, nearly $34,000, though representatives from Local 26 argue that the average annual wage is closer to $31,000.

Since HUDS first made public its intent to strike, students from across Harvard have rallied around the workers’ cause. A group of Medical School students released an analysis earlier this month denouncing Harvard’s health care proposal; 15 groups from Harvard’s Law School released a statement blasting the University for the negotiations, which they dubbed a class and racial “struggle”; and, at last estimates, a petition circulated by the undergraduate group the Student Labor Action Movement in support of the workers had garnered more than 2,750 signatures, according to SLAM member Farris M. Peale ’18.

A SLAM rally is scheduled for Friday afternoon and will take place in front of Massachusetts Hall.