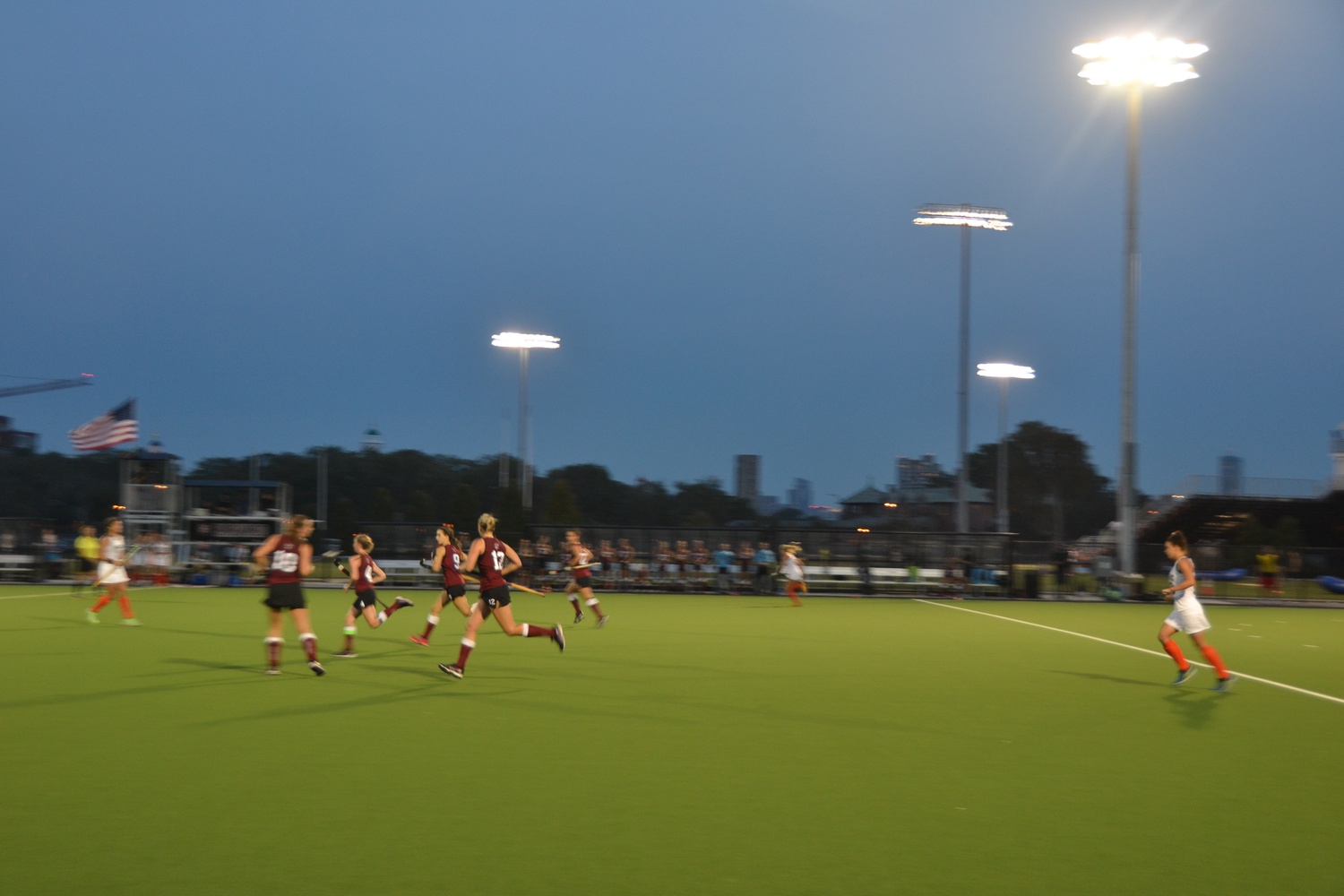 The field hockey team hustles back on defense beneath the lights against Pacific. The game stretched well past sunset, finally ending in the 87th minute. By Heather M. Forbes
By Amanda X. Fang, Crimson Staff Writer

A week ago, versus Holy Cross, the Crimson tallied the winning goal in the 98th minute. Yesterday, against University of the Pacific, the hosts notched the victory in the 87th minute thanks to a blazing strike by senior forward and leading goal scorer Marissa Balleza.

“I don’t think people realise how tiring overtime is,” Balleza said. “It’s whipping our butts into shape, but it really shows how much we want to win and how much effort we put into each game. We’re all dead but somehow we manage to pull through and keep going, so I’m really proud of our team for that.”

The Crimson had several opportunities to avoid extra time in the waning moments of regulation. In the final eight minutes, Harvard earned three penalty corners.

But the hosts could not convert those opportunities into goals. An injury sidelined junior midfielder Ellie Cookson, the regular penalty corner receiver; Duarte replaced her at the top of the circle during the short corners.

“In the last moments of the regular game, it could’ve gone either way,” said coach Tjerk van her Waarden. “Neither of [the teams] could find the back of the net. Pacific is a fantastic team, and they’ve proved that before and showed it today to us. I think we actually did very well against them.”

The first overtime was rife with potential goals for both teams, with multiple fast breaks coming from each. Captain and midfielder/back Kyla Cordrey stepped up into offense, driving the ball down the length of the field only to face resistance from the Tigers’ defense. Neither team managed to score, pushing the game into double overtime.

However, ten minutes into the second half, Balleza stepped up to win the game. Sophomore forward Kathleen Young earned a penalty, Duarte found Balleza, and the senior fired a shot into the top of the cage, ending the long evening.

“The stroke was no doubt about it going to be a goal,” van her Waarden said. “I don’t think I’ve ever seen a better taken stroke in my life…. It was a showcase of her skills and her determination to lead the forward line.”

With her two goals, Balleza stands seven goals shy of the program record. The senior has recorded 36 finishes in her career and has 14 more games to attempt to leave a historic mark.

“Honestly I try not to think about it too much,” Balleza said. “For me, it kind of gets into my head, and if I think about it, it just screws with me. I just keep trying to focus on the game at hand.”

Early in the game, luck didn’t seem to be swinging the Crimson’s way. The Tigers struck midway through the first half, leaving Harvard trailing 1-0. Pacific’s Rylee Corneau caused a turnover at the top of the circle before firing a shot past junior goalkeeper Olivia Startup.

Despite this setback, the Crimson retaliated in the early minutes of the second period with Balleza striking high into the Tigers’ goal after an assist by sophomore midfielder Emily Duarte. Duarte’s pass from centerfield and Balleza’s run around of the defense resulted in Harvard’s equalizer.

Harvard upped the ante in the second period, firing seven shots to Pacific’s three. Despite multiple attempts by Balleza, junior midfielder Hannah Wellington, and freshman forward Maddie Earle, the score was still firmly 1-1 when the full-time whistle blew. It would take a Balleza strike to break the deadlock.

“I think this [game] was another showcase of us taking another step in the direction we want to go,” van her Waarden said. “Being able to compete with these types of teams and win is the first step.”