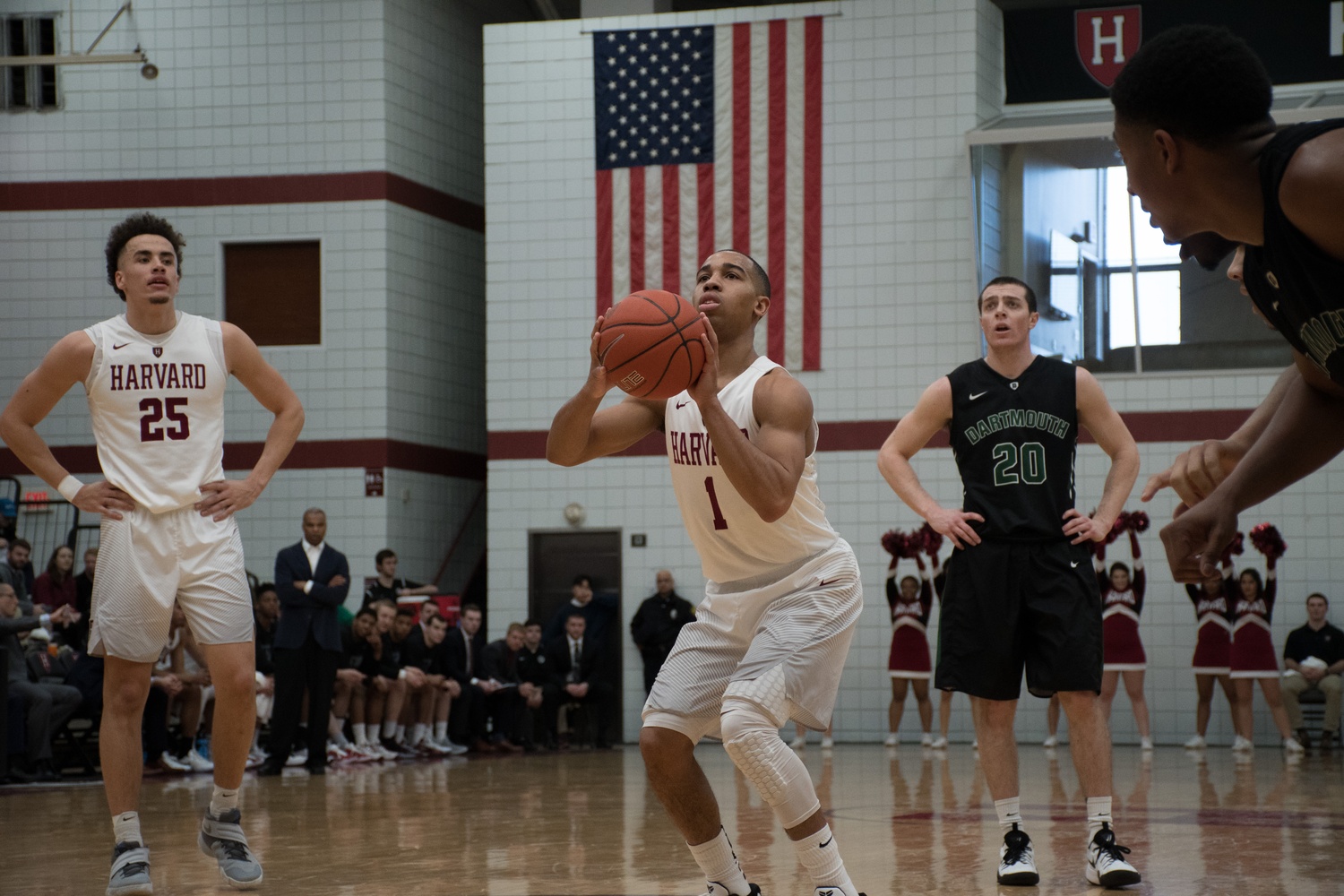 It wasn’t one of the five long three-point jumpers from sophomore guard Corey Johnson that allowed the Harvard men’s basketball team to pull away from Dartmouth on Saturday afternoon at Lavietes Pavilion. Nor was it a flashy dunk or emphatic block, of which there were many, by senior center Zena Edosomwan. Instead, the Crimson went back to basics, playing suffocating defense and getting good looks on the other end that led Harvard (10-5, 2-0 Ivy League) to a 82-68 victory over the Big Green (3-12, 0-2), its second win over the Big Green in two weeks.

Harvard rode a 15-4 run over a 3:56 stretch leading up to the second half’s second media timeout to bury its guests from Hanover. The Crimson built a 10-point lead that would only be cut to single digits once throughout the rest of the game. With his team down one, Edosomwan cleaned up a miss by sophomore guard Corey Johnson and laid home an errant Bryce Aiken layup on the next time down. Another Edosomwan layup was sandwiched between two layups from Aiken. Freshman forward Chris Lewis found classmate Seth Towns on a backdoor cut for an easy deuce. Co-captain Corbin Miller buried a three, Dartmouth coach David McLaughlin took a timeout, and, for all intents and purposes, the game was over.

On the defensive end, Harvard held the Big Green to two field goals and caused three turnovers during the run. The strong defense mirrored the play of the Crimson out of the gate. Harvard forced Dartmouth into misses on seven of its first eight field goal attempts, limiting the Big Green’s ability to get the ball inside and wreaking havoc on the perimeter.

“We did some things, trapping a little bit, we kind of sped it up and got them out of their rhythm,” Harvard coach Tommy Amaker said. “Using our bench, we can do that to wear people down, and I thought that was a factor this afternoon.

After missing five of its first six shots, the Crimson began bringing on the triples. Harvard found itself up 10 before Dartmouth hit its second field goal of the afternoon. Five of the Crimson’s first six field goals were threes. Johnson led the party with two, with Aiken, Miller, and Towns also getting in on the fun. The lead was as many as 13 early.

However, the Big Green began finding holes in the Harvard defense and capitalizing on a bevy of offensive rebounds. Dartmouth went for 22 points in the first half’s final 8:27. The Big Green used six first half offensive boards and easy layups from backdoor cuts to chip away at the deficit. Junior guard Miles Wright buried a corner three to send Dartmouth into halftime with its first lead of the game. Wright wasn’t the only Boston native giving the Crimson fits in the second half. Sophomore guard Guilien Smith went into the break with 11 points in a half in which Harvard was able to keep reigning Ivy League Rookie of the Year Evan Boudreaux under wraps.

After continuing to struggle to corral rebounds on the defensive end, Harvard made up for it on the offensive end. The first four-plus minutes of the second half saw four lead changes and a tie. Johnson and co-captain Siyani Chambers each hit a triple as the Crimson struggled to keep the Big Green away from missed jumpers and the free throw line. Rather than force more threes to try to keep pace, Edosomwan and company went back to basics.

“It kind of started off with our defensive tenacity,” Edosomwan said. “I think that a lot of our shots came from our defense getting stops, and it kind of energized us offensively and we were getting a lot of open shots and easy reads, but it definitely started with the defense.”

The effort was there, especially on the defensive end, down the stretch. Harvard held Dartmouth to 25 points over the game’s final 15:47. The Crimson had eight offensive rebounds of its own and outrebounded the Big Green, 18-14, in the second half. The Harvard lead grew to as many as 17 in the game’s final minutes, with many players ganging up to put the final touches on Dartmouth.

“We talked [at halftime] about how we need to do a much better job of getting on the offensive glass,” Amaker said. “Why can’t we keep balls alive, or get some extra possessions, or even score on the offensive glass? I thought Zena, his activity around the rim, being a presence, was a big difference in the game.”

Chambers had eight second half points while Johnson and Edosomwan both finished with 15. The Big Green did get to the line 27 times and was led by 33 points from its two sophomores, but it was Towns who led all scorers with 19 on an afternoon in which the Crimson shot 48.3 percent from the field and made 13 three-pointers.