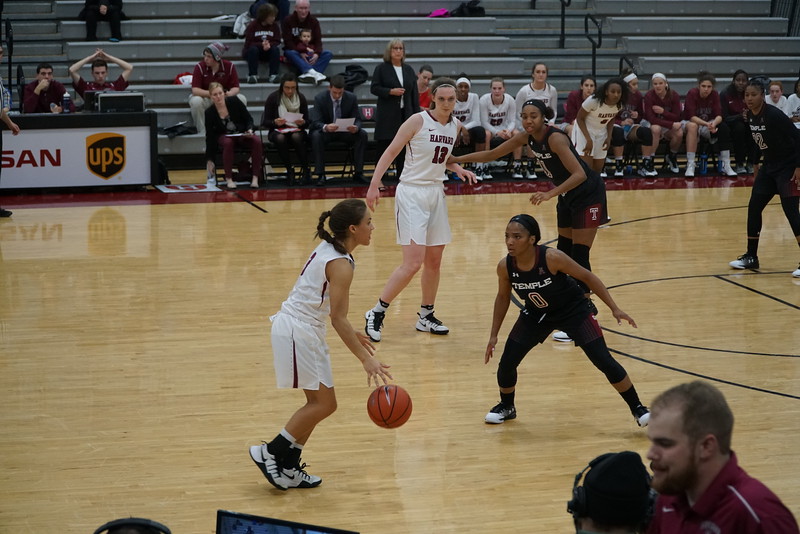 The Crimson stretched their win streak to 14, the longest such streak in Division I behind top-ranked Connecticut’s record-breaking 92-game win streak, thanks to a 70-61 triumph on the road against Dartmouth.

Facing the Big Green (5-10, 0-2) just two weeks after their first encounter on January 7, coach Kathy Delaney-Smith’s team knew what to expect and executed their gameplan effectively. One Dartmouth spurt aside, Harvard was comfortable as it continued a perfect start to the Ancient Eight portion of its schedule.

“It definitely helps that you played them recently,” freshman point guard Katie Benzan said, “We know what we need to better next time and what we should do differently. We just improved on everything, I think, and that really helped.”

Benzan, the Crimson’s leading scorer with 17 points, started the game with a three-pointer, setting the tone offensively. Junior forward Kirby Porter and sophomore guard Madeline Raster added triples of their own in the first quarter as the two teams went back and forth.

An excellent defensive period allowed Harvard to pull away in the second quarter. Back-to-back jumpers by freshman forward Jeannie Boehm stretched the lead to five, 19-14, early in the frame before a three-pointer by Big Green junior guard Emily Slagle cut the lead to two with eight minutes remaining.

That would be Dartmouth’s last field goal of the quarter, however, as Raster shut down the hosts’ leading scorer, Kate Letkewicz. Meanwhile, six different players scored for the visitors in the second quarter as the Crimson entered halftime with a 29-20 lead.

“[Raster] is our defensive stopper,” Delaney-Smith said. “We put her on Letkewicz, and she got nothing. [Raster] did a phenomenal job. And she does it on the offensive side as well.”

As has been the trend, however, Harvard let its opponents back into the game through turnovers and poor rebounding. After a Benzan three-pointer restored the nine-point lead two minutes into the third quarter, the Big Green went on a 15-4 run to claim a 39-38 advantage. They were fueled by eight points from sophomore forward Isalys Quiñones, who led all scorers in the game with 18.

“We haven’t blown anyone out,” Delaney-Smith said. “Every single game has been close. We’ll get a double-digit lead and then we don’t handle the runs very well. I don’t know if that’s a product of our youth, I’m not sure, but we’ll keep trying to figure out how to get better at that.”

The Crimson, however, climbed out of its offensive rut and scored the last six points of the period to retake the lead, 44-39.

“Dartmouth gets up for us, and it was really an exciting game,” Delaney-Smith said. “It was closer than I wanted it to be, we should have been able to extend our lead. Every game has different shifts in momentum, and there was a stretch where we let them back in it.”

As they’ve done throughout the win streak, the visitors were resilient and relied on another ensemble performance to close out the game. With three players in double figures and a number contributing in small spurts, Harvard scored 26 points in the final quarter to keep Dartmouth at arms length. Despite struggling to hit its shots consistently, Harvard was combative defensively and on the glass, forcing Dartmouth into low-percentage shots in key moments.

“That’s how we won,” Delaney-Smith said. “We won on our defense, we won on our rebounding. Even down the stretch when they closed the gap, we just dug in and I thought our defense improved and we beat them to the rebounds and the 50-50 balls.”

With the win, the Crimson move to 29th in the national RPI rankings, one spot behind where they were on Saturday.