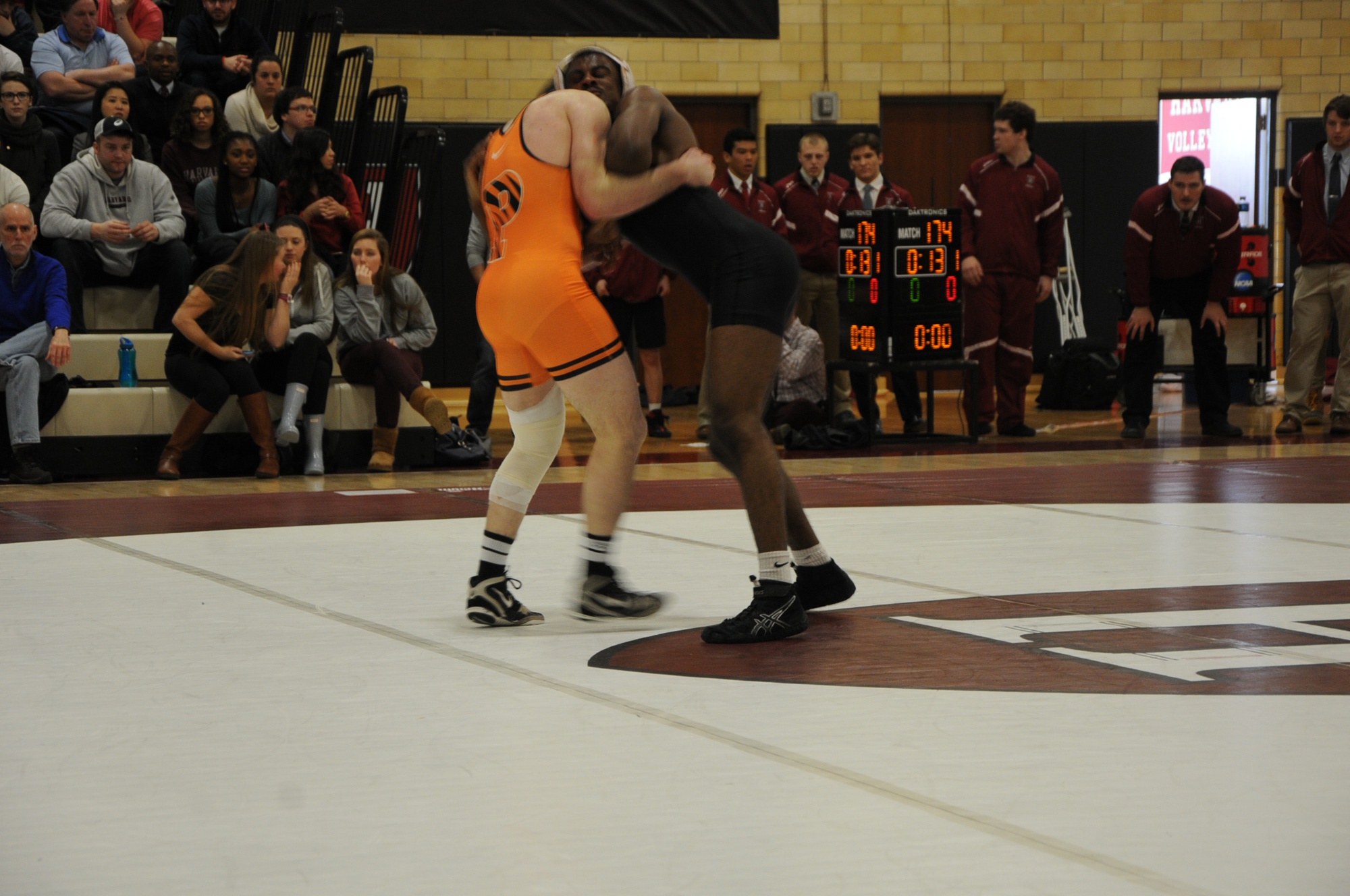 The weekend bore mixed results, as Harvard (1-4) dispatched the Diplomats early in the afternoon before falling to the well-regarded Bison. Bright spots came in nine places—which was the number of wrestlers who recorded at least one win. Freshmen Hunter Ladnier and Kyle Bierdumpfel and junior Josef Johnson posted 2-0 records.

“We’ve improved a ton,” junior Logan Kirby said. “The young guys have really stepped up and are scoring bonus points. The older guys are really sharing their knowledge and pushing their knowledge. Everyone in the room is working super hard.”

Three bouts remained in an afternoon contest against the Bison, and the Crimson seemed to have Bucknell in a half nelson.

Freshman Kyle Bierdumpfel (165 lbs.) and junior Josef Johnson (174 lbs.) had just won by decision, with respective scores of 6-1 and 9-4. Now Harvard held a 16-12 advantage with the contest winding to a close.

But over the next three duels, the lead evaporated. Bucknell showed up late to claim a 24-16 lead and prevent the Crimson from earning a second straight victory.

“We had some guys in close matches,” junior Rico Stormer said. “Several small mistakes cost us a lot of points.”

Harvard held a lead earlier in the day, as rookie Hunter Ladnier (149 lbs.) pinned Seth Hogue to give the Crimson a 10-7 lead. Tri-captain Jeffrey Ott also triumphed, in his case by a 16-7 major decision.

The rest of the team struggled to find success, however. Junior Kanon Dean wrestled Drew Phipps to the limit but ended with a 3-2 loss. More lopsided were the 11-3 major decision that freshman Conor Sakmar (125 lbs.) dropped and the 16-0 result, after a technical fall, that Cody Knight (147 lbs.) suffered.

In the contest, freshman A.J. Jaffe, Stormer, and tri-captain Nick Gakjdzik also lost. Even so, the overall competitiveness of the score gave Harvard partisans something to cheer, as Bucknell represented one of the more talented programs that the Crimson has faced in 2017.

“We came up a little short, really,” Stormer said. “They’re a good team, but we could roll with them…. We’re just not where we want to be yet.”

At Marmion Academy in Aurora, Ill., A.J. Jaffe captained his high school’s wrestling team as a junior and senior. He won the state championship and earned All-American honors.

It’s no secret that college wrestling is a different beast. But according to Stormer, the rookie has looked anything but.

“He’s very, very consistent,” Stormer said. “He’s out there wrestling hard every time. He practices hard every day. He’s one of the hardest workers on the team.”

That effort shone through against the Diplomas, as Jaffe was the only Harvard wrestler to pin his opponent. That result led the way in a Crimson-dominated matchup.

It took months of training, three earlier contests, and countless gallons of sweat, but against Franklin & Marshall, Harvard finally walked away from the mat with a team win.

“Every match was really competitive,” Kirby said. “We just stayed aggressive and fought for every point.”

Other impressive performances came from Bierdumpfel and tri-captain Johnson, who claimed 10-1 and 12-1 major decisions, respectively. In addition, Stormer stormed ahead with 16-0 victory by technical fall.

The two losses on the day came in low-scoring decisions. The first-year Sakmar suffered a 4-1 defeat to Edgar Garcia. And at 184 pounds, Dean dropped a second tight bout, this one by a score of 2-1.

The success of other teammates made those setbacks irrelevant in the end. Freshman Zeth Dean (157 lbs.) avenged his older brother’s defeat with a 3-1 victory by decision.

Two other Harvard wrestlers won by falls. Junior Angus Cowell (285 lbs.) topped Core Kerkesner, and Ladnier won by a technical fall to cement a 2-0 record on the weekend. Sophomore Samuel Goldman rounded out the performance with a 6-4 win by decision at 133 pounds.

“We want to win every match we have from here on out,” Kirby said. “We want to wrestle hard, get some good wins under our belt, be ready to go at conference tournament, and hopefully send as many guys to nationals as we can.”