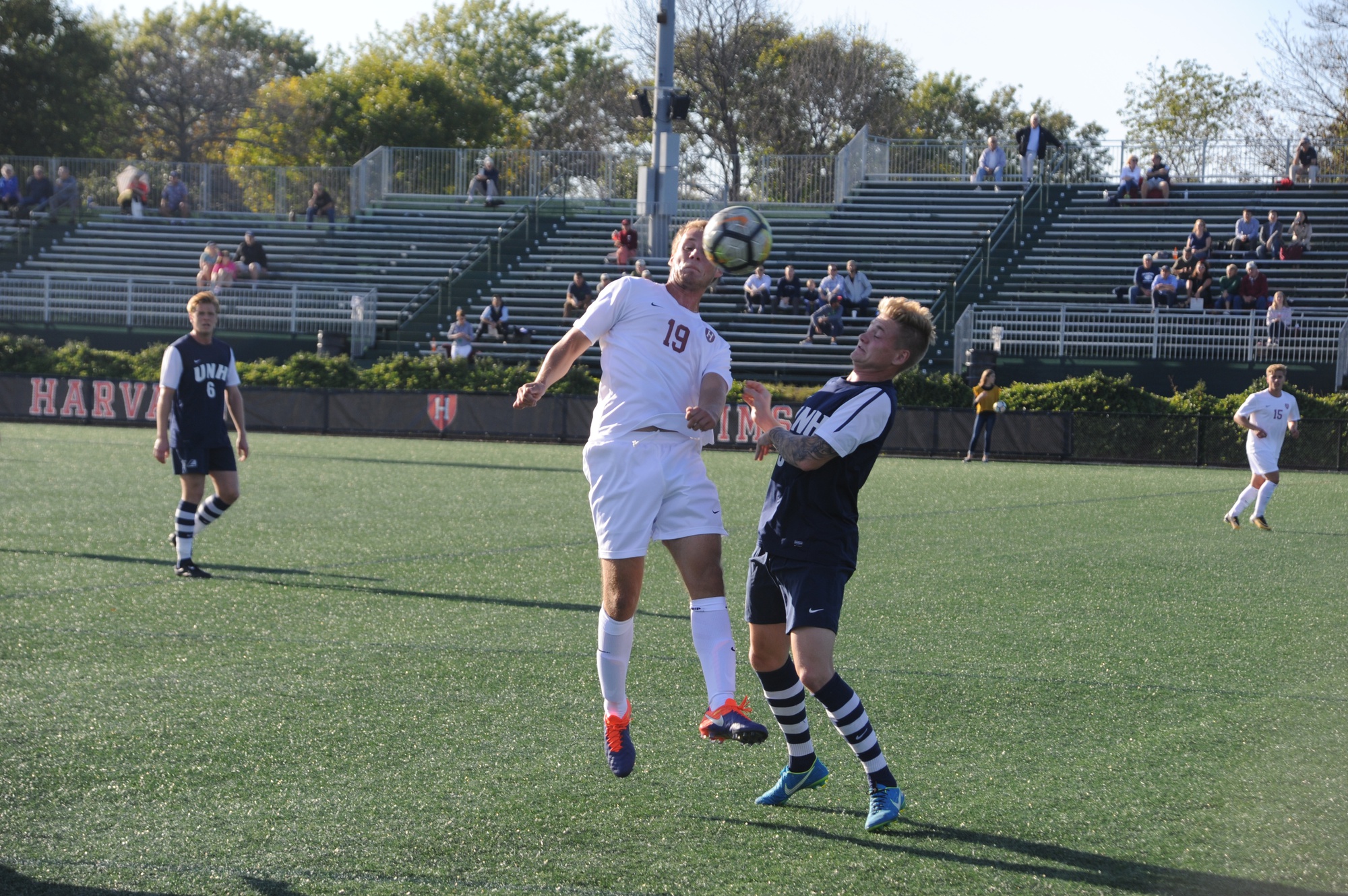 Freshman defender/forward Rory Conway leaps up to settle a 50/50 ball against an opponent from the University of New Hampshire. The rookie started for the third time this season, and recorded one of the Crimson’s shots on goal. By Matthew W DeShaw
By Katherine H. Scott, Crimson Staff Writer

“Past performance is not indicative of future results”: so often seen in the fine print of historical financial data, the phrase applied in Saturday’s soccer game. In its penultimate road match of the season, the Harvard men’s soccer team (2-6-2, 1-1 Ivy League) faced off against a team it had not lost to since 2012, including a 4-0 route in 2016.

This year was different from the previous years, as a historically weaker Cornell (5-3-2, 1-0-1) had a relatively strong start to the season, and went into the match riding on a five game winning streak. Combine this with a home field advantage, and the Crimson now faced a formidable opponent. Though it fought hard, most notably dominating the last 40 minutes, Harvard’s efforts were not enough for it to be able to leave Berman field in Ithaca, N.Y., with its second conference win.

“We fought really hard --especially in the second half--and we had plenty of chances,” co-captain and defender Justin Crichlow said. “We just couldn’t put one in the back of the net, which is frustrating, but that’s just how the game goes sometimes.”

That deadlock ended in the 10th minute, as the Big Red’s offense was awarded a corner kick. Ryan Hill connected with teammate George Pedlow on a corner kick, who managed to outcompete the Crimson to get a header past senior goalie Kyle Parks.

“Unfortunately they scored early on, and we really couldn’t get back at them by scoring,” freshman midfielder/forward Paolo Belloni-Urso said. “We tried everything-- we...pressured them in their half and unfortunately we weren’t able to score.”

The Crimson was not deterred by the early goal, but it took another six minutes for the team to get a shot on goal, which came courtesy of sophomore striker Philip Hausen. After Hausen’s initial blocked header, several more opportunities came, with several players contributing to the attack. Cornell’s defense was tough to crack, and remained unyielding, keeping Harvard off the score sheet in the first half.

Harvard kept up the intensity in the second half. Defensively, the back line held to allow no more goals. Parks recorded six saves, including taking on Cornell’s Brady Dickens one-on-one and managing to get a single foot on the ball to get it out of bounds.

On the other end of the field, the team was amping up the pressure. Just as in the first half, Harvard was kept away from Cornell’s goal for the first few minutes of the half. In the 54th minute, Belloni-Urso and senior midfielder Christian Sady recorded two back-to-back shots of their own, only to be stopped both times by the Big Red goalie, senior Mitchell Meyer.

“I’m proud of the guys for leaving everything out there on the field,” Crichlow said. “[Cornell] outcompeted us in the first half and we definitely outcompeted them in the second half.”

The team continued the intensity throughout the half, especially in the last 15 minutes of the game. The team had several chances to get the equalizer with several corner kicks, but each of its attempt was thwarted by Cornell’s defense. Even Parks left his usual spot in between the posts to add an extra man to the offense. The goalie participated in a corner kick and got a shot off in a last-minute effort that ultimately came up short.

With the last few games of the season at hand, every game counts and a loss is never welcome. But once again, the phrase “past performance is not indicative of future results” applies to Harvard-- its past results in matches will in no way determine how it will perform in the last games of the season. The team’s fate in the Ivy League remains in its control, though with little room for error.

“All the guys on the team know it’s still in our hands,” Crichlow said. “We still have a great shot to win the Ivy League championship. We just need to make sure we’re correcting things that need to be corrected, and we definitely have to win the rest of our games.”

“I think we need to work on how to stay calm and try to play our style of game and not get away from that...no matter what the score is,” Belloni-Urso added.