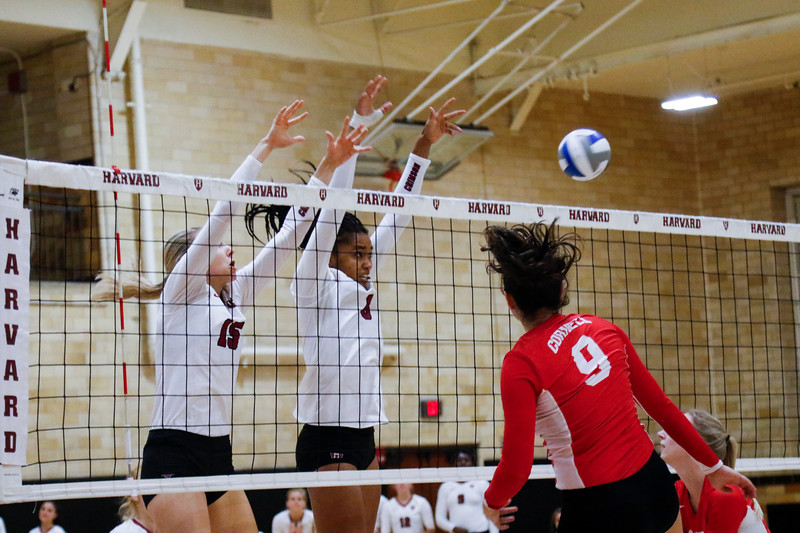 Middle blockers Jocelyn Meyer and Maclaine Fields rise up to meet the ball at the net in the Crimson's win over Cornell. By Timothy R. O'Meara
By Christopher M. Vassallo, Contributing Writer

Riding a five-game winning streak entering this past weekend, the Harvard women’s volleyball team (8-4, 3-0 Ivy League) continued rolling against Ivy League competition as it overcame Cornell (5-7, 1-2) on Friday night and Columbia (5-7, 0-3) on Saturday in front of two capacity crowds at the Malkin Athletic Center.

“We were able to defend the home court,” sophomore hitter Grace Roberts Burbank said. “We’re getting better each day. Each point, we’re learning something new and developing as a team.”

On Saturday evening, the Crimson displayed its ability to dominate opponents, quickly taking care of business against a battered Lions team.

Columbia was on the second leg of a New England road trip and coming off two straight Ivy League losses. The day before, it fell in three sets to Dartmouth, a team that Harvard dismantled in four sets last weekend. The Lions mustered only 30 points in those three sets.

Against the Crimson, Columbia put up more of a fight. The team battled hard in the second set even after falling flat in the first, 25-14 .

The intense back-and-forth in the first half of the second set brought the crowd energy into play, and Harvard made use of a strong series of in-game adjustments to ultimately pull ahead for good.

“Our big focus for us this match was proving that we could take care of their second set,” junior middle blocker Jocelyn Meyer said. “In this match we proved to ourselves that we can handle that. Columbia was switching up all of their hitters so we had to work on switching up our defense a little bit. As long as we were playing our game, we were able to keep going strong.”

The third set was the tightest one of the match, as the two squads battled to 20-20 with nothing to separate them. An ace from sophomore setter Erin McCarthy gave the Crimson a slim lead, and it would not look back as three different players recorded kills for Harvard to bring the team within one point of victory.

After the Lions battled off one set point, a service error by sophomore setter Grace Campbell doomed them to defeat.

“There were definitely improvements [from the Cornell game],” Burbank said. “Now we are 3-0 in the Ivies and are going to take on Penn and Princeton at their home courts. We are going in with confidence.”

The night before, the Crimson found itself in a more closely contested battle with the Big Red. Harvard raced into the lead with a comfortable win the first set, 25-18, but Cornell battled back to take the second set, 25-21, to notch things at one set apiece.

In the crucial third set, the Crimson went on a 5-0 run early on to take a 7-4 lead. It never relinquished the advantage and went on to take the set, 25-20.

On the brink of defeat, the Big Red once again proved tough to finish off in the fourth set, forcing nine ties. Down to its last point at 24-20, the team fought off four set points to tie the score at 24-24.

As she has done multiple times in her career, however, Harvard junior middle blocker and co-captain Christina Cornelius took over. She tallied two straight kills to stave off the Cornell comeback and secure the win for the Crimson.

With the 3-1 victory, Harvard claimed its first 2-0 start to an Ivy League campaign since 2004.

Burbank notched a team-high 14 kills alongside Cornelius, and sophomore setter Erin McCarthy also proved crucial as she recorded a team-leading 40 assists to go along with 12 digs. Cornelius, with 11 kills against the Big Red and 7 against Columbia, continues to lead the team in total kills with 118.

Following its two wins, the Crimson sit undefeated at the top of the conference standings, but so does Princeton, setting up a big clash next weekend in New Jersey.

“That’s going to be our big motivation in practice this week: to stay at the top of the Ivy League.” Meyer said.