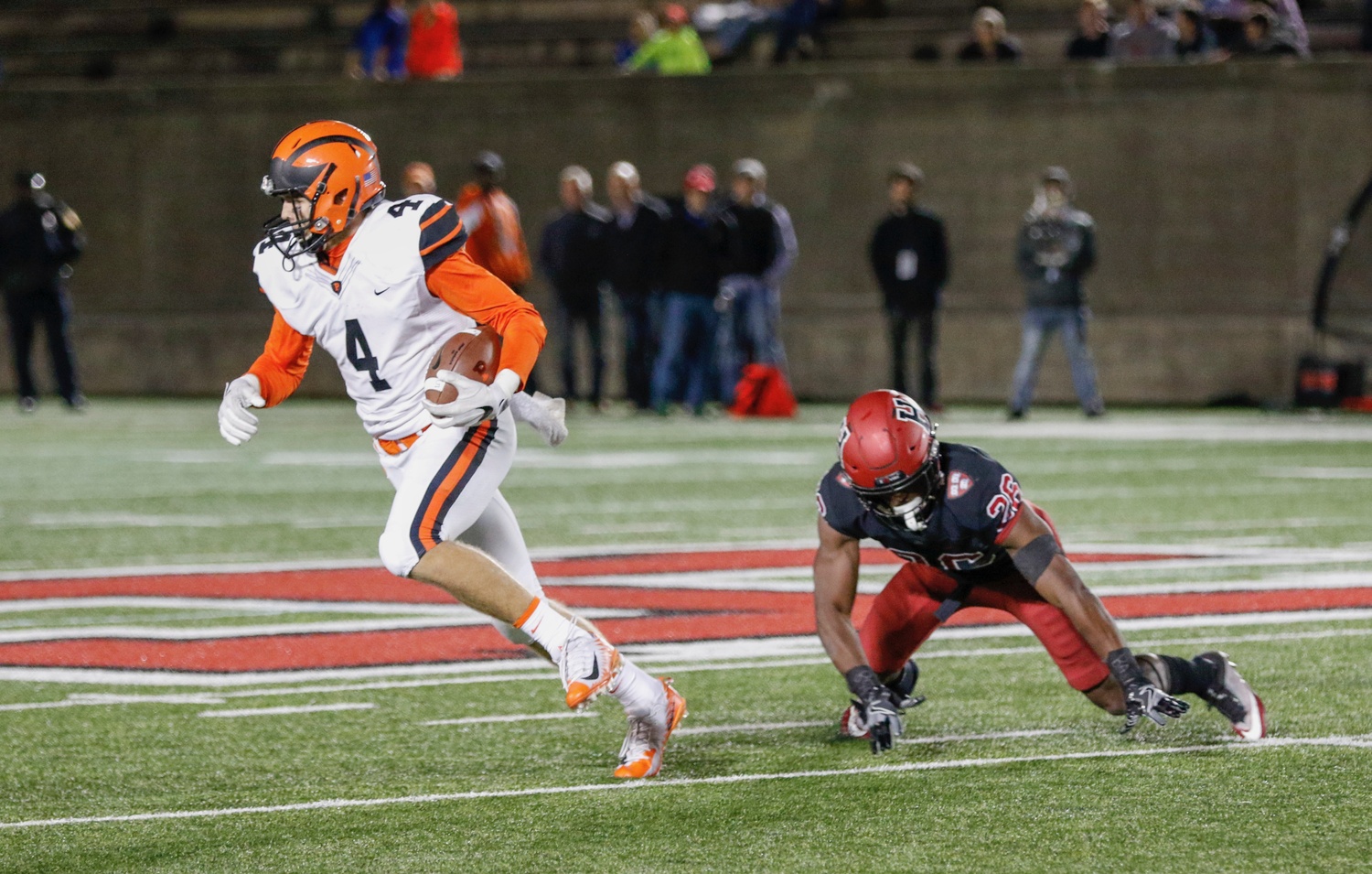 Princeton wide receiver Jesper Horsted cuts past senior defensive back Tobe Ezeokoli for a 66-yard score. In the first half, the Tigers accumulated 323 yards in the air. By Timothy R. O'Meara
By Sam Danello, Crimson Staff Writer

Three minutes before halftime, the junior grabbed the ball in front of senior cornerback Tobe Ezeokoli. On the last series, Ezeokoli had left the field with a lower-body ailment. Now, Horsted added insult to literal injury. He stopped, twirled, and sprinted 66 yards to the end zone.

“I knew there were guys on the inside, so I gave the little spin move a try,” Horsted said. “[The cornerback] happened to be aiming for the inside shoulder.”

That score summarized the evening, as the Tigers (5-1, 2-1 Ivy) left the Crimson clutching at air in a 52-17 drubbing. Horsted posted a career-high 246 receiving yards on 13 catches, senior quarterback Chad Kanoff went 31-of-35, and Princeton reached 50 points for the third-straight game.

The outcome resembled few others during the tenure of Harvard coach Tim Murphy—or anyone else, for that matter. The last time that the Crimson gave up 50 points, the year was 1989, and Murphy was a first-year coach at Cincinnati. Opponents have eclipsed 52 points only twice in 144 years.

The blowout likely bars Harvard from winning a league title. As of Friday, the Crimson (3-3, 1-2) sat in sixth place, ahead of only Penn and Brown.

“Stating the obvious, we got our butts kicked by a really outstanding Princeton team,” Murphy said. “There was really no facet of our team today, starting with the head coach, that did well.”

Beneath the electric lights of Harvard Stadium, Kanoff started hot and never cooled. He shelled the hosts for a career-high 421 yards, including 323 in the first half. The veteran even punted for the Tigers, although the team needed his services only twice.

The most impressive statistic was the 21 straight completions that Kanoff reeled off to begin the game. That start buried the Crimson, turning an expected slugfest into a rout.

A pass finally hit the turf at the start of the third quarter. Kanoff recovered on the next play by scrambling for a first down. He finished with an 89-percent completion rate, the second-highest in school history. 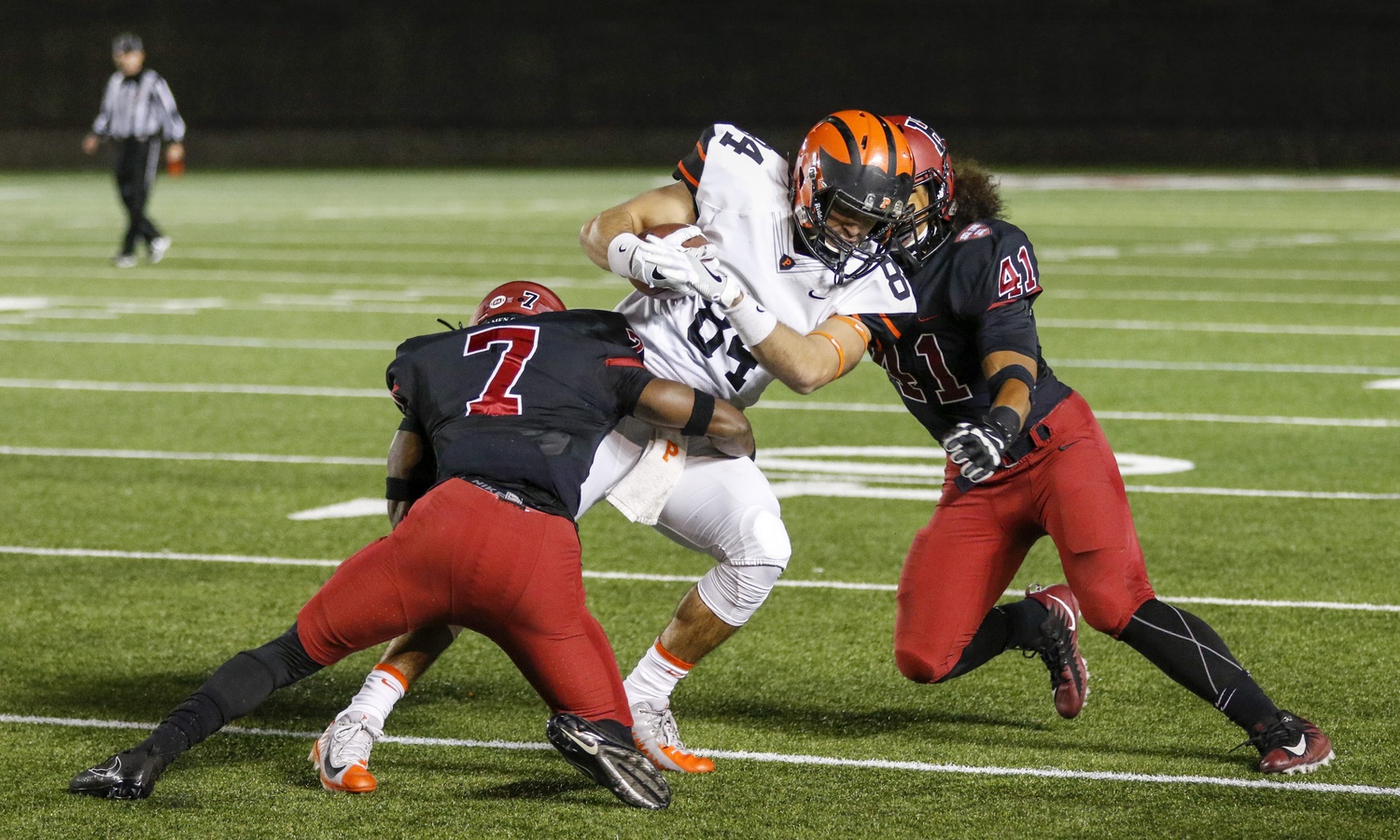 Junior wide receiver Stephen Carlson stretches for one of his 11 catches. By Timothy R. O'Meara

After Horsted’s 66-yard touchdown, Princeton led 24-3. Harvard fired back with a quick response after a remarkable catch by junior tight end Dan Werner, who bobbled a 44-yard pass and landed at the two. Junior running back Charlie Booker scored soon after.

The Tigers squashed any momentum with a terrifying efficiency. The offense needed 57 seconds to move 80 yards. Kanoff completed four passes for 56 yards, and junior running back Charlie Volker punched in a 14-yard score.

That touchdown left the Crimson with a 31-10 deficit heading into halftime. Players walked into the locker room with their heads down. Harvard hadn’t conceded so many first-half points since at least 2006, meaning as far back as online box scores go.

Horsted bore much of the responsibility. He racked up 201 yards before intermission. The junior even threw a touchdown late in the third quarter to fellow wide receiver Stephen Carlson. That trick pushed the margin to 45-10.

Even when Horsted didn’t score, he set up touchdowns. Midway through the second quarter, he caught a 27-yard post route at the two and hung on despite a jolting hit. Volker shoved up the middle on the next play to gain a 17-0 lead.

“We knew they had a tremendous offense coming in,” Murphy said. “The display they put on in the first half was obviously overwhelming.”

The loss to Princeton especially stings given the result two weeks ago, when Cornell stunned the Crimson with a 17-10 upset. If Harvard had won that matchup, the program would still control its destiny. Now, the Crimson faces only the slimmest of odds. 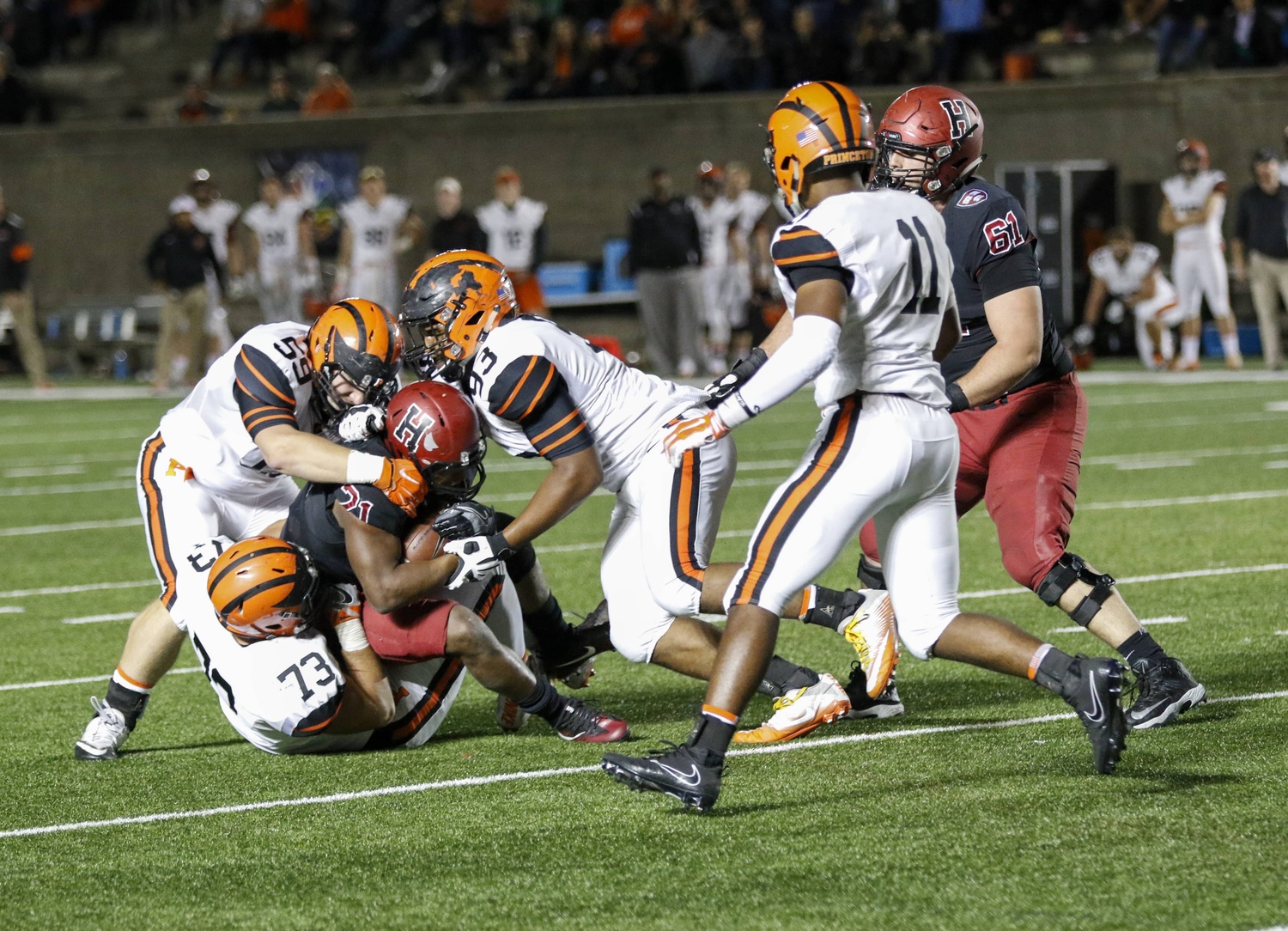 The beatdown began early. On the Tigers’ first series, Harvard limited rushers to four yards on three carries, but Kanoff went seven-of-seven for 85 yards. On second-and-nine from the Crimson 20, the senior had two receivers wide open at the goal line. Kanoff opted for Horsted, who walked in for a 7-0 lead.

The quarterback’s perfect start continued on the next drive, when he completed four more throws. The only reason that Princeton didn’t score a touchdown was that Tigers’ coach Bob Surace decided to run twice after facing second-and-four on the Harvard 23. The Crimson stuffed those attempts, leading to a 40-yard field goal.

In that nightmarish first quarter, Harvard conceded 153 yards of offense. The visitors gained 10 first downs versus three for the hosts.

“They did a good job of going fast, of changing up the play call,” said captain and linebacker Luke Hutton. “We were really on our toes. We just couldn’t figure them out the entire game.”

At times, the Harvard offense showed flashes of potential. Smith completed 20-of-31 passes for 268 yards, Antonellis fought for a career-high 81 receiving yards, and the reliable Booker churned out 72 yards on 19 carries.

However, this offensive production could not match Princeton’s. After Booker’s second-quarter touchdown, the Crimson didn’t reach the end zone again until 2:16 remained. At that point, freshman running back Aaron Shampklin crashed in from one yard out.

Harvard had another chance four minutes into the fourth quarter, when Smith drove the team to the Tigers’ nine. But on second-and-goal, the rookie lofted a ball between junior wide receiver Justice Shelton-Mosley and senior cornerback Chance Melancon. The elder won the battle, wresting away an interception.

Even if Shelton-Mosley had grabbed the ball, that score hardly would have impacted the result. After leading 31-10 at halftime, Princeton tacked on two more touchdowns in a third-quarter flurry. Those scores, combined with a 32-yard run by Collin Eaddy in the waning minutes, pushed the Tigers above the half-century mark.

The defeat leaves the Crimson in a historically unusual place. For the first time since 2005, Harvard enters week seven with a 3-3 record.

“It looked like it was pass skeleton against the JVs,” Murphy said. “We just didn’t get enough pass rush. We didn’t cover well enough. It’s not any one thing.”