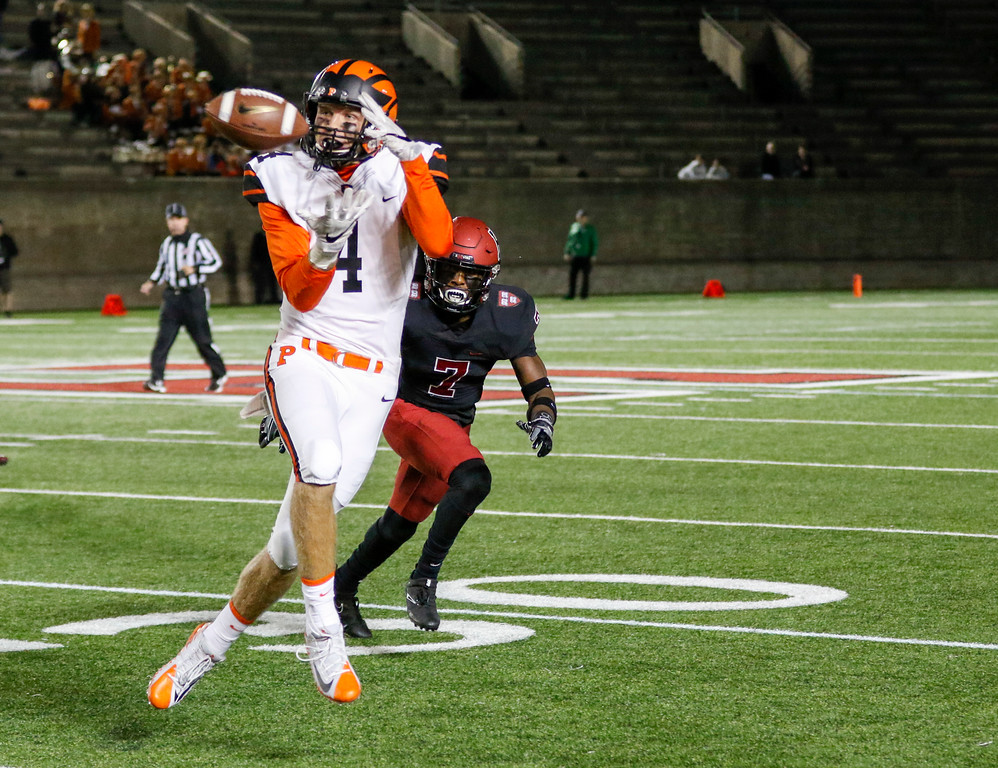 Princeton junior wide receiver Jesper Horsted brings in a catch before turning upfield, where he is met by Harvard senior defensive back Raishaun McGhee. The Crimson corner finished with seven total tackles, including one for loss, in his team’s relatively porous effort against the Tigers. By Timothy R. O'Meara
By Jack Stockless, Crimson Staff Writer

This past Friday night, Harvard lost under the lights for the first time in program history. Princeton (5-1, 2-1 Ivy) dominated from the kickoff, scoring 17 unanswered points to start the game and commanding a 31-10 halftime advantage. The visitors gained 573 total yards, which is the highest mark against the Crimson so far this year.

Harvard (3-3, 1-2) now has the narrowest of windows to contend for an Ancient Eight title. Conceivably, the Crimson could win out and finish 5-2 in league play. In that scenario, the stretch run could be very intriguing, as four teams currently sit at 2-1.

“We were focused every single play,” said Tigers senior quarterback Chad Kanoff. “It’s not like I’m just running around drawing plays in the dirt. I think we’re focused every play…. We want to complete every ball, so we did a pretty good job of doing that tonight.”

And complete every ball he did—almost.

Kanoff was on fire throughout the first half, throwing a perfect 20-for-20 for 323 yards and two touchdowns. All told, the Tigers signal caller finished 31-of-35 and racked up 421 yards in the air.

Generally, Kanoff hit his top two receivers with impunity, as juniors Jesper Horsted and Stephen Carlson consistently found themselves with space to spare when targeted.

However, even when defenders draped themselves on the receiving duo, Kanoff still managed to complete his passes. In the third quarter, the quarterback lofted a pass to Horsted, who reached around his man and grabbed the ball with one hand at the three-yard line.

Kanoff and Horsted benefited from coach Bob Surace’s up-tempo play-calling. With halftime approaching, Princeton breezed through an 80-yard drive in 57 seconds. In all, the Tigers ran 76 total plays in just 32:31 of game time.

“There’s days in practice where I usually watch the offense, not that I don’t care about the defense, but we get in a zone,” Surace said. “I felt we were in the zone in the first half. I think we had five drives. We scored all five times. I loved how fast we played.”

Adding to Kanoff’s impressive display was his punting, as the senior also contributes to Princeton’s special teams.

“I'd yell at him because his punts weren't high enough,” Surace said. “That's a little joke we have. They had a great returner and we wanted hang time on the punts and I had to find some flaw there.”

In previous weeks, the Tigers defense had shown flashes of brilliance. A week before the Harvard game, Princeton blanked Brown in Providence, R.I. It gave up just 17 points in each of its first two games, both victories against non-conference opponents.

However, the Tigers were tripped up by Columbia in week three, 28-24. Seven days later, Georgetown put up 30 points on Princeton, but the prolific offense bailed out the defense in the Tigers’ 20-point win.

This game was a true test of the Tigers’ defensive prowess, and they passed with flying colors.

“We talk about running every day, and we had our secondary breaking on those flat routes, which have kind of given us some pain in the beginning of the season,” said Princeton junior linebacker Tom Johnson. “Definitely a point of emphasis is no big plays every week.”

The Crimson struggled to gain yards after contact on rushing plays, something that it has used to its advantage in earlier games this season. Junior running back Charlie Booker averaged just 3.8 yards per carry, and the longest run of the day belonged to freshman quarterback Jake Smith on a 26-yard scramble in the second quarter.

Smith recorded his career high in yardage, but for the fourth straight week he conceded an interception. Princeton’s defensive line did not pressure Smith or the Harvard backs often, as the rookie quarterback was not sacked. However, the Tigers made stops when it mattered—the Crimson converted just three of 10 third-down opportunities.

One of the more clutch plays came at the beginning of the third quarter. After Princeton punted on the first possession after the half, Harvard was driving and looking to chip away at a 21-point deficit.

On second-and-nine, Tigers defensive back Chance Melancon stripped Booker as he reached the line of scrimmage. Sophomore linebacker John Orr dove on the ball, effectively curtailing the Crimson’s momentum and setting up another scoring chance for Princeton.

“Obviously we’ve been on the opposite end of these games, and we knew that these guys were a solid, well-coached team with good speed,” Johnson said. “We had tremendous effort from some younger guys stepping in…and it makes it easy when you’ve got so many guys ready to step up.”