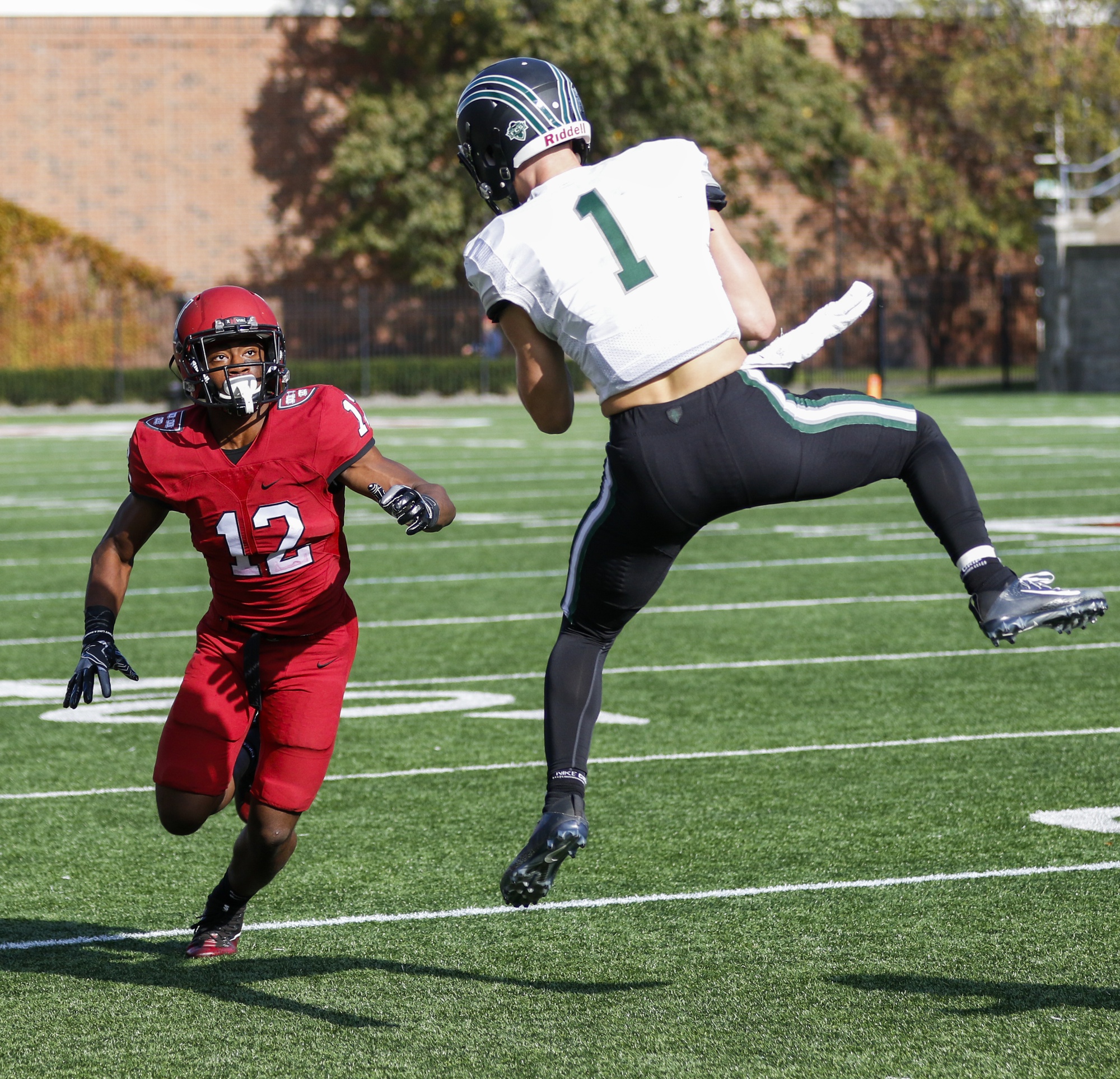 Both looking to rebound from losses in week six, Harvard and Dartmouth faced off Saturday in a must-win matchup for each team.

The intensity showed. The Big Green (5-2, 2-2 Ivy) came out hot, scoring two quick touchdowns In the second half, though, the visitors faltered while the Crimson only gained steam. Erasing a 14-point Dartmouth lead, Harvard (4-3, 2-2 Ivy) took control and maintained that lead as time expired to win its 14th in a row against the Hanover, N.H., program.

Dartmouth is a fourth-quarter team. Tied for second in the Ivy League, the group has played exactly one game this season that has been determined by more than four points.

Against Holy Cross, the Big Green scored the go-ahead points in overtime. Against Penn, Dartmouth scored on fourth-and-goal as time expired. Against Yale, the team tallied 14 points in the fourth quarter, including a touchdown pass with 34 seconds left, to win by one. And against Sacred Heart, the cardiac competitors scored in the fourth quarter to take the final lead of the game.

After all, prior to this game, Dartmouth had outscored opponents 45-9 in the final period.

Against Harvard, the script seemed likely to repeat. The Big Green started by driving the length of the field, earning a touchdown, and cutting the Crimson margin to three. Harvard got the ball back with 4:18 left and tried to bleed the remaining time. It was unsuccessful.

“We had control of that game,” junior linebacker Jack Traynor said. “We had a clear opportunity to take control and win that game.”

With 1:36 remaining, Dartmouth held the ball on its own 20. Now, it seemed, was the time for the prophesied Big Green comeback. That’s almost what happened.

Quarterback Jack Heneghan rattled off five straight passes, three of which were complete for five, 15, and 10 yards, respectively. That push moved the ball near midfield.

However, with about 1:15 left, Heneghan slung a low pass near the right hash. The ball took an unlucky bounce off Harvard senior cornerback Raishaun McGhee and floated just enough for senior safety Tanner Lee to stretch out and slip his arms beneath the ball. That interception halted the threatening Dartmouth campaign.

“It seems like every week we're in a battle [in] the last couple minutes,” Traynor said. “Up until that last interception, we thought we were right in it.”

Dartmouth and Harvard football have a storied history. So do their coaches.

Born eight days apart, the figureheads of these two Ancient Eight dynasties have been friends for nearly a half-century, going back to their days of Little League baseball. The pair had a memorable encounter during an early game. As he rounded third, future Crimson coach Tim Murphy charged down the line and plowed into future Big Green coach Buddy Teevens manning the plate. The collision adeptly foreshadowed the many years that the two would meet across an Ancient Eight football field.

Before they competed in football, the pair played for the same varsity squad. Teevens took snaps at quarterback while Murphy protected him on the offensive line and took spells at defensive end and linebacker.

After attending the same middle school, the two became good friends—so good that after work during the summer, Murphy would hitchhike his way to the Teevens household and join Buddy and his five brothers in their gym.

By the time they attended Silver Lake Regional High School in Kingston, Mass., the two were inseparable. Both starters for the varsity team, Teevens went on to lead Dartmouth to an Ancient Eight title in 1978, and Murphy headed to Springfield College to play linebacker.

The pair reunited in 1985 when Teevens became Maine’s head coach and brought Murphy on as the offensive coordinator. When Teevens eventually left for his alma mater, Murphy took the reins in his first head coaching position with the Black Bears.

Now, 30 years later, the two face off every season in the rivalry between their two respective institutions. So far, Murphy has been perfect. When coaching against his high school teammate, Murphy is 13-0.

“They’ve probably done the best coaching job of turning a team around this year of anyone in our league,” said Murphy of the Big Green coaching staff. “They’re literally two plays away from being 7-0. They’ve done a remarkable coaching job.”

A SERIES OF FORTUNATE EVENTS

The Big Green went up 14-0 early in the first half, and then the Crimson scored 25 straight points. Harvard’s about-face can be attributed almost entirely to a single moment.

With over a minute left in the half, the Crimson was forced to punt the ball. Up 14-0, Dartmouth had the opportunity to extend its lead to three possessions heading into the locker room. In other words, the Big Green controlled the game.

The punt soared high and towards returner Danny McManus, who called for the fair catch. Senior halfback Jack Stansell was the first man in crimson to meet him on the coverage. Racing behind Stansell, a Dartmouth defender ran into the halfback, who collided with McManus. Flags came flying.

The contact with Stansell was not enough to knock over McManus—just enough to distract him as the ball bounced off his chest and toward the approaching Harvard coverage.

The referees conferred among one another, presumably about the distance of the penalty on Stansell, only to pick up the flags and declare Crimson ball on the the Big Green 38-yard line.

That decision did not sit well with the visitors from Hanover.

“[Without the penalty,] you're going up 14-zip and feeling pretty good,” Teevens said. “Maybe we'll come away with three points or something. [Instead,] they go down and score. It could have been a great situation for us, and it turned into a wonderful situation for them and made it a much closer ballgame.”

From there, Harvard exploded. The offense took advantage of the fumble, as freshman quarterback Jake Smith tossed an eight-yard touchdown pass to senior tight end Ryan Antonellis. Now down only eight, the Crimson went into the half with a more manageable deficit.

“There were a couple plays at the end of the first half that were maybe questionable, but whatever—you've got to live with that [and] keep fighting,” Traynor said. “It's impossible to put into words the frustration that we have right now.”

Coming out of the locker room, it was evident something had changed. Harvard received the ball and drove to the end zone on 12 plays for 76 yards. The possession ended when sophomore running back Lavance Northington took a snap from the four. Essentially everyone believed that the Crimson would run on the ensuing play, as the team had with Northington all year. Instead, after gathering the snap, Northington took two steps left and and fired a bullet to Antonellis. The score went down as Northington’s first college completion.

“[Northington] was a hell of a high school quarterback,” Murphy said. “He’s just a great athlete, a great decision-maker, and a great leader. You have to find multiple ways to use him. You have to defend the spin-motion plays on the perimeter. He’s just one of those kids that’s a unique fit.”