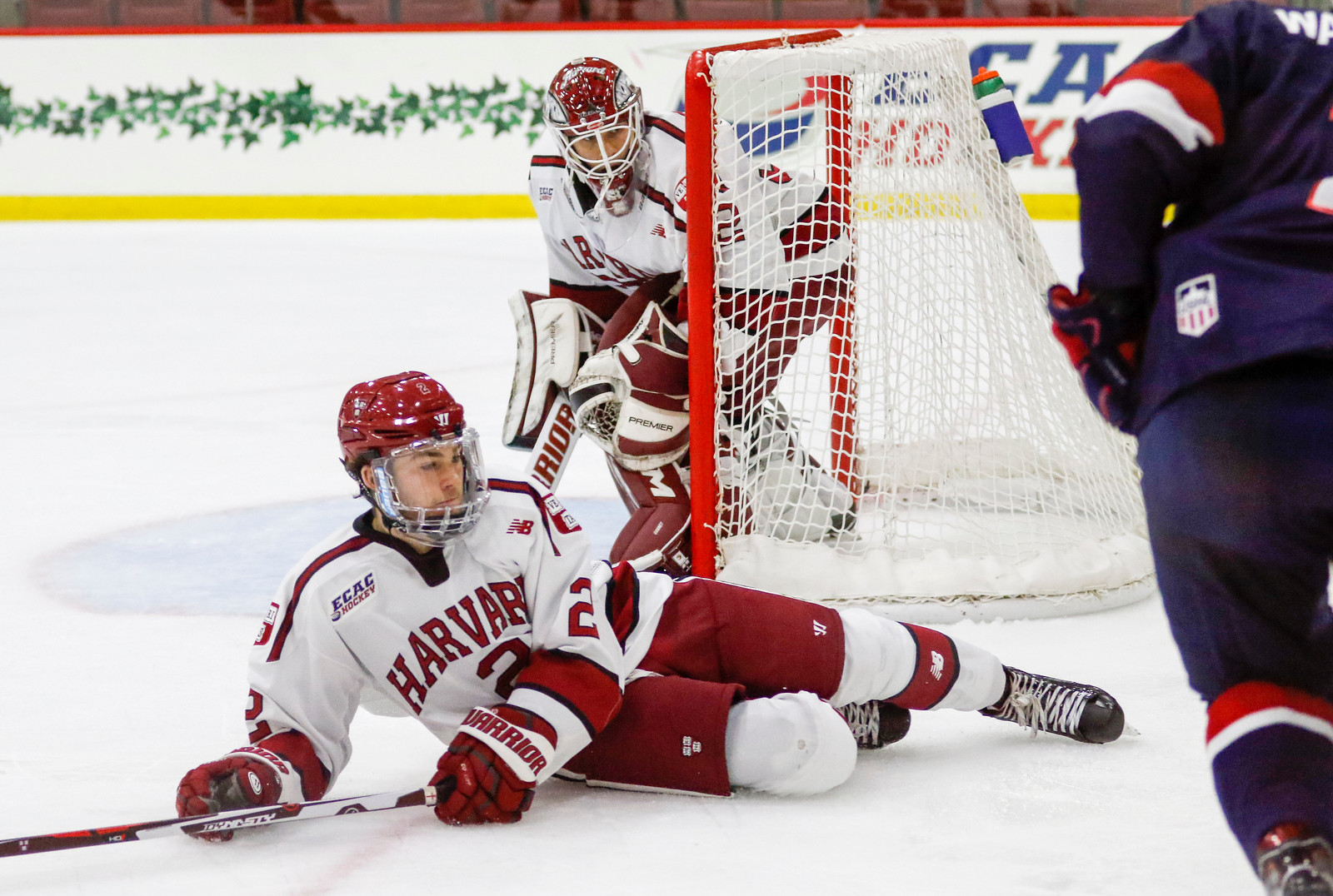 Harvard hopes to slide into its nine-game away stretch after nabbing wins against ECAC foes Yale and Brown this weekend. For the Crimson, not only the four points are on the line, as this weekend is the last chance the team gets to shore up its play before hitting the road. By Timothy R. O'Meara
By Spencer R. Morris, Crimson Staff Writer

It’s just another pair of games on the schedule.

In a vacuum, these claims are all true. But for the Harvard men’s hockey team, the stakes are raised in this weekend’s contests with Yale and Brown.

“Yale’s the big rivalry for us. They always play us really tough,” tri-captain Eddie Ellis said. “It’s the last chance we’ll get to own our game…at home before we have to deal with going on the road against some big opponents that we have moving forward.”

Harvard (1-0-0, 1-0-0 ECAC) entertains the Bulldogs (1-1-0, 1-1-0) on Friday night before facing the Bears (1-1-0, 1-1-0) the following evening. These two games mark the Crimson’s final chances to tweak its systems and integrate its freshmen before hitting the road for a program-record nine-game stretch.

Due to Ivy League restrictions on season start dates, these two conference foes opened their seasons last weekend just like Harvard. Yale and Brown actually faced each other in a home-away series in which each team won a game in the opponent’s rink.

No matter where the Bulldogs rank in the ECAC, they always challenge the Crimson. The historic rivalry between the schools always elevates the intensity of their on-ice clashes.

“There’s so much history that goes into [the rivalry], and with that comes a lot of hype and energy,” Ellis said. “Guys from both teams are going to be really amped up to play in that game every single year. So I think that has a lot to do with why it always seems like a hard-fought battle.” 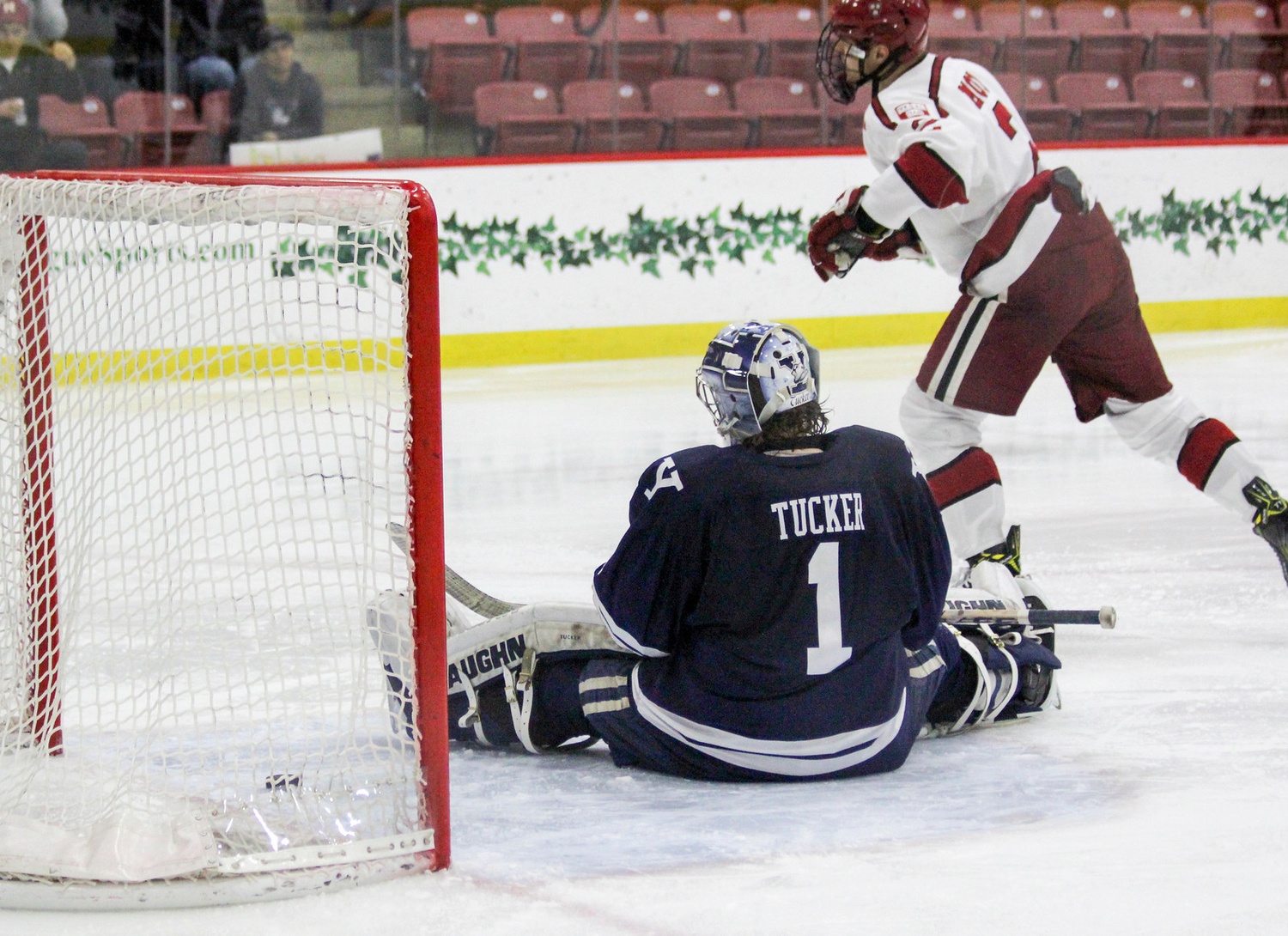 Last season, Harvard took all four games from Yale. The Bulldogs simply could not keep up with the Crimson's scoring pace. This provides for an even more heated rivalry heading into next year, as Yale looks to avenge those losses. By Thomas W. Franck
Advertisement

The Crimson’s annual slate against Yale is living proof that any team can win on any night. Last season, Harvard entered both regular season matchups as the favorite but nabbed just one point in the teams’ meeting in Cambridge. The 1-1 draw ended up being the Crimson’s final non-win until Minnesota-Duluth bounced the team from the Frozen Four over two months later.

“There’s nobody we’ve played more than Yale over the last six or seven years,” coach Ted Donato ’91 said. “There’s a lot of competition in the league, but for Yale, it’s different…. We know that this game is emotional, and I think you can throw the records and the pre-season predictions out the window.”

When Harvard goes head-to-head with ECAC teams this season, it will usually derive confidence from knowing it has the best player on the ice in junior forward Ryan Donato. Matchups with Yale are among the few instances that call this fact into question.

The Bulldogs have their own Donato counterpart, Joe Snively—also a junior, also a forward, and also a preseason all-ECAC nominee. Just the second Virginia native to play for Yale’s program in the last half-century, Snively led his team with 39 points last year, which included a 12-game scoring streak. In last weekend’s back-to-back with Brown, Snively potted a pair of goals.

Limiting the Bulldogs’ offensive centerpiece will be a tall task for the Crimson’s lock-down defensive pairing, composed of senior Wiley Sherman and sophomore John Marino. The shutdown responsibilities fall on everyone, however, according to coach Donato.

Yale will also get back senior Ryan Hitchcock, now the captain of the Bulldogs, after an injury cut his season short last year. Prior to the ailment, Hitchcock was averaging over a point per game. Now healthy, he should add to his team’s offensive potency.

“[Snively and Hitchcock] are two very gifted, high-end offensive players,” coach Donato praised. “We need to defend them with numbers and with intelligence…. I don’t think we look at it as one person needs to try to shut [Yale’s] offense down—it’s a team effort.”

It may sound strange, but another key to the Crimson’s game plan is to actually play with one. The Ivy rivals faced each other four times last season, and all the games were competitive. Yet, none of them ended the way Yale wanted.

By the end of the teams’ regular season matchup at the Whale, and right away in Game 1 of their ECAC playoff series at the Bright, things got chippy. Harvard, confident in its own abilities, is best off not participating in any post-whistle extracurriculars. 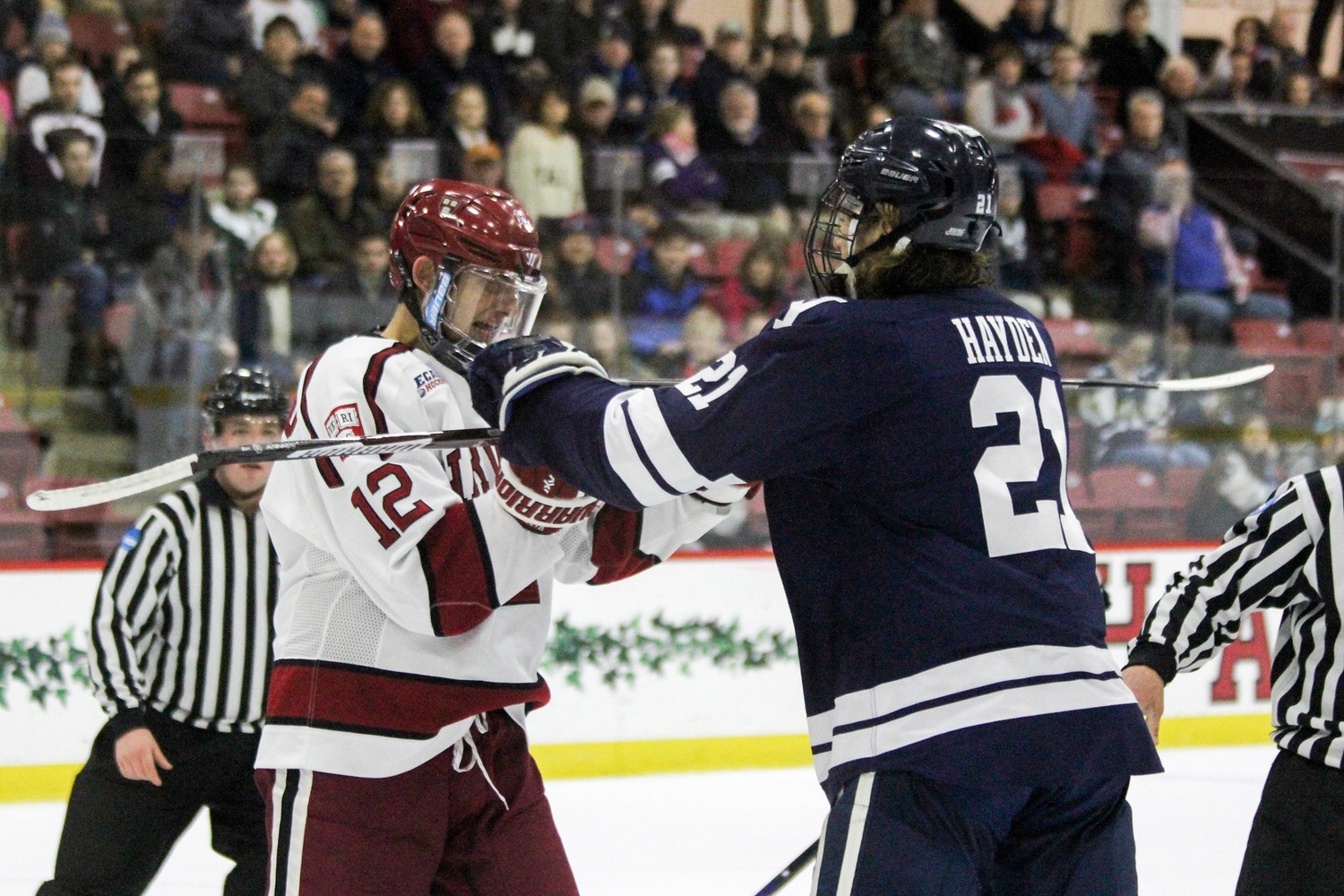 “The challenge with Yale is that the emotions are always there,” coach Donato said. “Regardless of what the records are, we know that it’s going to be an emotional game…. For us, it’s a great challenge against an excellent team that we expect to be around at the top of the league.”

The players likewise appreciate the emotions, providing for a fun Friday night.

“Both times I played them last year, it was always a chippy, physical game,” sophomore forward Nathan Krusko said. “It’s so much better when there’s that atmosphere and that intense competitiveness.”

On paper, Saturday night’s matchup promises to be a bit more lopsided than the always-close game against the Bulldogs.

The Crimson outscored Brown 9-0 in two games last season and has beaten the Bears four straight times entering the weekend. But even Brown cannot be taken too lightly.

In 2014-2015, despite Harvard almost doubling the Bears in league points, the Crimson dropped a 2-1 stunner to a Brown team that finished just 5-14-3 in the ECAC. Plus, the Providence dwellers split last weekend with Yale, so they may still provide a formidable challenge for Harvard.

“Brown is another great team coming into our building as an Ivy League and ECAC game,” Krusko noted.

In recent seasons, the Bears’ troubles have revolved around balance. Each year, Brown ices multiple impressive players, but the complementary pieces around them cannot seem to pull their weight in production.

In 2016-2017, the team’s top trio—then-junior forwards Max Willman, Charlie Corcoran, and Sam Lafferty—accounted for 50 percent of the overall scoring. The positive is that the Bears lost relatively little to graduation, and these high-end skaters have returned for their senior season. With a year of development, Brown should be at least a bit more competitive this year.

Regardless of the opposition, Harvard has just two games left before it enters its long spell of away contests. While every ECAC rivalry match is important, the Crimson wants more than just four points this weekend.

Still, all attention shifts to Yale and Brown in the coming days.

“I think we feel like the stakes are big every night,” coach Donato said. “Our guys want to put a couple of big wins in the bank this weekend. We do go on the road for an extended amount of time, but more importantly, we [just] want to play well.”