A lifelong Cantabrigian, Richard Harding Jr., currently serves on the Cambridge School Committee and is running for City Council for the first time.
By Aidan F. Ryan 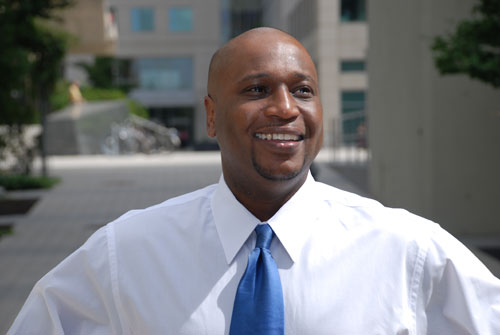 By Courtesy of Richard Harding, Jr.

A lifelong Cantabrigian, Richard Harding Jr., currently serves on the Cambridge School Committee and is running for City Council for the first time. Prior to serving on the school committee, Harding began his career as an intern at Citizen’s Energy, a non-profit that brings heating oil to homes of elderly Massachusetts residents. He has worked as Director of Constituent Services for former Massachusetts Senator Steven Tolman, and Chair of the Ward 2 Democratic Committee. He also serves as Vice President of Cambridge’s NAACP chapter. Harding’s campaign platform proposes creating affordable family-friendly housing, increasing the quality of public education, addressing the growing opioid crisis, and decreasing gaps in economic inequality.

RICHARD HARDING, JR.: I think that the issues of affordability within the city, affordable housing, affordable child care and universal pre-K, the income inequality that is blatant here in Cambridge, to some degree where you don’t see it in other places. I think Cambridge is the greatest place to live, work, raise a family, and go to school, but we are not immune to the other issues that are happening around us both globally, nationally, and locally. For me, it’s about making sure that Cambridge allows everybody to strive and thrive in a city that can only be as great as its most vulnerable person.

RH: I think I’m uniquely situated to connect people like myself, the people who were born and raised here and who have made this city great, with the people who have come here to study or to work or to raise a family or whatever the case may be. People want to come here, and rightfully so, and I think there has to be a particular balance in ideas and how we communicate and respect each other as citizens and use our collective will to make sure the city is working for all of us.

RH: I think a few different approaches that we could take would be appropriate. Some of them more looking at what we can do through zoning and making sure that we’re entertaining development projects that are committed to affordable family-friendly housing versus a lot of big luxury buildings. I think we need to look at some particular creative tax credits that we are giving developers to build here. I think we also have to think about what we call affordable. Cambridge has a unique problem—it’s too unaffordable to rent and too unaffordable to purchase a home here in Cambridge, so we need to figure out creative ways to fix that.

THC: How do you think Harvard and other universities within Cambridge should work with the city to help this housing crisis?

RH: I don’t think they’re doing enough. I think that it’s a shame that Harvard only gives the city so little bit of resources towards affordable housing and other programs. You also have to figure out a way to house your own students. That takes away from the pressures on the housing market. There’s no doubt that in our school system, in some of our human service programs, and even in some of our planning that Harvard could use its talent and treasure to help us.

RH: I think that we are in some of the most trying times that I have seen in my life. The rhetoric, the policies, the temperament, and the lack of competence that is on display at 1600 Pennsylvania Ave. is inexcusable and sad in a way that words can’t describe. And for me, my biggest issue here is to send to the voters in Cambridge that this is a clear example of why elections matter. I think Cambridge is a strong enough community to survive. We are so invested in our values that we will live long after Donald Trump’s regime leaves the White House.

RH: From what I know there’s been a pretty good attempt to send a message to Washington. I think that we could always do more. I think think that there’s always an opportunity to continue to be consistent about sending a message, about the community that we are and our values and I think we should, whenever we can, send that message to Washington through whatever, by any and all means necessary.

Many of the things we have done at this point have been symbolic. I think that we should focus though as much as we can on the issues that, when citizens of Cambridge wake up tomorrow, will be front and center in their lives like housing, the income inequality, the growing opioid crisis, public education, the lack of diversity in a lot of our hiring, and the situation we have around poverty and homelessness.

THC: How do you think Cambridge should balance the need for more bike lanes and concerns from residents who say they take up parking space?

RH: There are way more cars than bikes. I don’t say that because I’m anti-bike—because I’m not—and I’m not anti-pedestrian. But the truth is, where they’ve done some of these projects, particularly the protected bike lanes, it’s been a horrible planning process and no one’s been held accountable. I think that the narrative has been set up to pit the people who are pro-bike lane against the people who are perceived as being anti-bike lane. There has to be a balance. There has to be good planning.

RH: We should do all we can, once again, to preserve the authenticity of Harvard Square and the small business nature that it always was.

RH: I think they should follow the law that was passed. I would agree with having more education to make people aware and understand the facts about marijuana. The voters spoke and they spoke loudly on this law, so I think that the city has to do what it can within its powers to evolve around the change of conscious or change of attitude around recreational marijuana and see to it that we adhere with the laws as much as we can.