With 2.3 seconds left, the Big Red scored the game-winning goal in front of a sold-out home crowd and sent the Crimson back to Cambridge with a pair of losses on the weekend. Harvard falls below .500 and plays Minnesota next weekend. 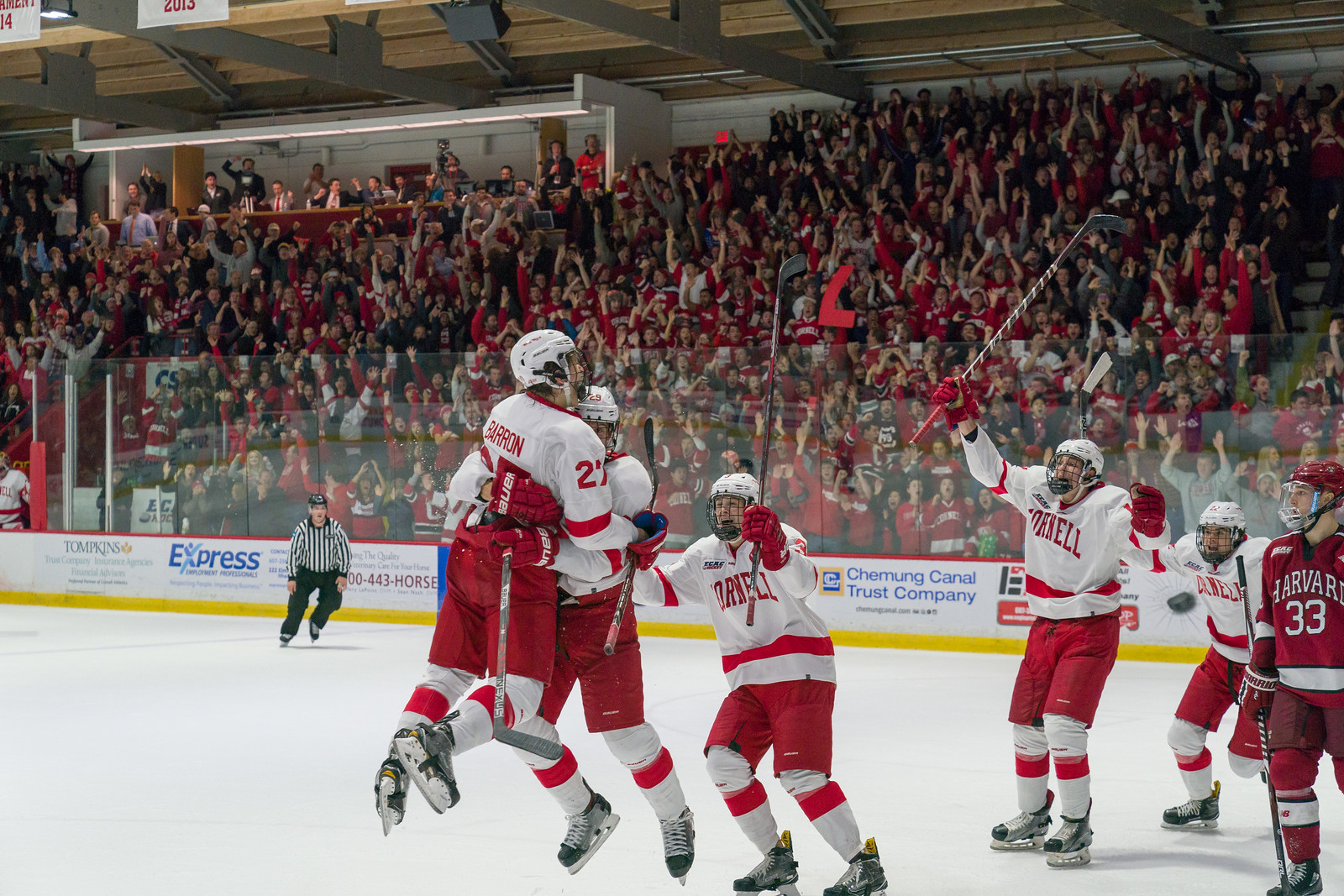 Cornell celebrates after scoring the game-winning goal with 1.4 seconds remaining in Saturday's contest. The loss, which evokes mainly frustration from the Crimson, puts Harvard under .500 for the first time since late-2013. By Courtesy of David Burbank
By Spencer R. Morris, Crimson Staff Writer

ITHACA, N.Y. — Every showdown between the Harvard men’s hockey team and Cornell promises to be a great on-ice display. On Saturday night, the meeting between the two teams was more than great—it was an instant classic.

You couldn’t have asked for a more dramatic set-up: two storied rivals entering the final five minutes of a sold-out game at Lynah Rink even at 2-2. All events leading up to that point—goals, calls, and plenty of fish—were in the rear-view, as the loud, emotional battle culminated in one last push from each squad.

Heartbreak, however, was the only thing in store for the Crimson (2-3-0, 2-3-0 ECAC), who fell to the Big Red, 3-2, on a goal scored with 2.3 seconds remaining. Harvard’s ability to score late in the game was stunted by a slew of penalties, which overlapped twice in the final minutes to give Cornell (6-0-0, 3-0-0) multiple five-on-three stints.

“The guys [are] very frustrated. We worked really hard, [and] we played a great game,” coach Ted Donato ’91 said. “To have to kill two five-on-threes off is a lot, especially at the end of the game…. We felt like this game was stolen from us a little bit.”

Coach Donato’s displeasure with the officiating down the stretch manifested itself during play. The heated bench boss was whistled for his zealous opposition to multiple calls late in the contest, including a charging call on freshman Jack Badini and a non-call after an apparent hooking infraction during junior Ryan Donato’s shorthanded breakaway.

“We were shorthanded. The game was going back and forth,” coach Donato said. “We had a couple calls against us that were pretty inconsistent.”

The subsequent bench minor awarded to coach Donato, plus the last-second game-winner from Cornell defenseman Alex McCrea, have surely added another chapter to the illustrious history between the Crimson and the Big Red.

“We take a bench minor. That’s all on me,” coach Donato admitted, somewhat defiantly. “I apologized to the guys after. I apologized for the [lack of] competency we saw out there as well.”

From the time the raucous Lynah crowd rained seafood down on the Crimson before puck drop, the building was electric. The opening festivities of the annual game in Ithaca always produce an animated first period.

Saturday’s encounter saw just that. After falling into a two-goal hole, the hosting Big Red trimmed Harvard’s lead to one before the period horn. In the final minute of the frame, Cornell willed the puck past the goal line after 30 seconds of utter pandemonium in and around tri-captain Merrick Madsen’s crease.

After fighting off a heavy slapshot from the right point, the Crimson tender recoiled and hurried to get back in position. A teammate in the blue paint impeded Madsen’s repositioning effort before sophomore defenseman Yanni Kaldis streaked into the high slot and wristed a puck through the traffic. The crowd erupted immediately.

“I thought we carried the play for most of the first period,” tri-captain Eddie Ellis said. “They score a goal, and it seems like the tables are turning, but I thought we stayed pretty composed despite the late-goal going into the second [period].”

Leading up to the Kaldis tally, the Crimson importantly struck first and took a temporary chunk out of Cornell’s morale. The noise, however, never faltered and continued to shake the building.

Thanks to coach Donato mixing up the forward pairings after Friday’s loss to Colgate, freshman forward Henry Bowlby found himself skating alongside junior forwards Ryan Donato and Lewis Zerter-Gossage on Harvard’s top line. The rookie didn’t hesitate to make an impact right away.

Bowlby potted a two-on-none goal after a smart cross-crease feed from Zerter-Gossage gave him a mostly empty net. The scoring play started at the blue line, where a backchecking Donato kept the puck in the zone.

By the time the biscuit trickled toward Zerter-Gossage, Donato’s two linemates were in alone with Big Red netminder Matthew Galajda. The rest was history.

“Henry’s been doing a great job for us since he’s come in,” Ellis said. “He’s learned a lot very quickly and he’s been a great asset for us.”

Bowlby’s strike helped the Crimson settle into the daunting Lynah environment. Once comfortable, Harvard was able to add another first period tally thanks to sophomore Ty Pelton-Byce.

With the puck somewhere underneath Galajda’s pads, fans and players alike had paused the action anticipating a whistle—seemingly everyone but Pelton-Byce, that is. The Madison, Wisc., native kept digging at the crease and eventually knocked the loose puck into the net.

The goal further buttressed coach Donato’s decision to tweak the lines, as Pelton-Byce was also skating alongside two new forwards on Saturday. Both forwards seemed to fit in nicely with their new trios.

Besides the continued growth of the Crimson and its younger players, Harvard hopes to build on its solid start to the Lynah contest. After struggling in the opening minutes of multiple games this season, a two-goal lead and poised play—in such a challenging environment—was a small takeaway from the frustrating loss.

“There’s a lot of positives there,” coach Donato acknowledged. “A lot of guys performed very well under the spot light here, and it’s just very disappointing, and we’ll regroup.”