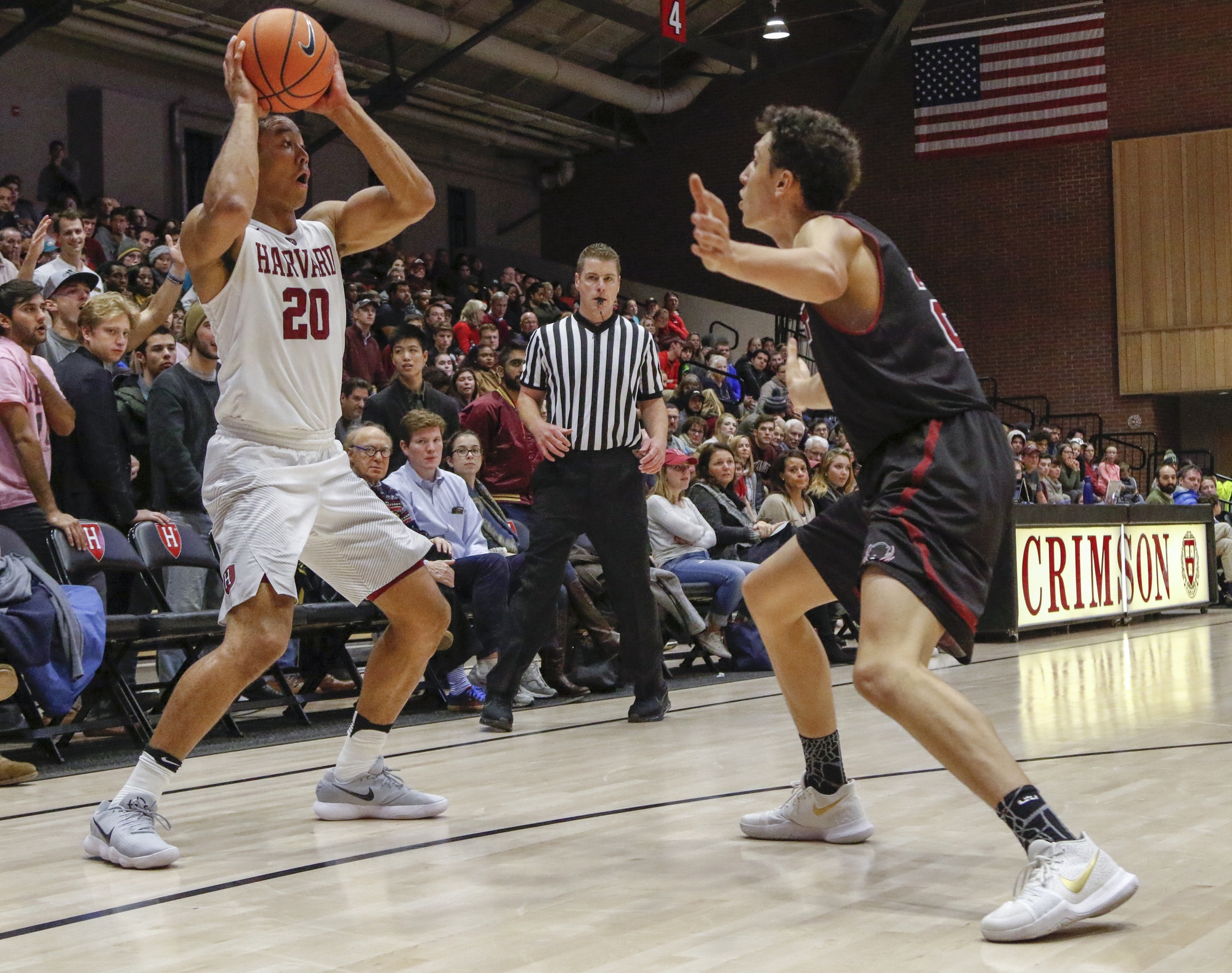 Sophomore wing Justin Bassey led the Crimson into a Thursday night matchup with Holy Cross. Despite his efforts, Harvard dropped an anomalous game to the Crusaders, primarily due to a slew of turnovers. By Timothy R. O'Meara
By Henry Zhu, Crimson Staff Writer

The Harvard men’s basketball team turned in an anomalous performance in its first road matchup of the season on Thursday night, falling to Holy Cross, 73-69, at the Hart Center in Worcester, Mass.

The Crusaders (2-0) maintained a tough zone defense throughout the contest, a formation that the Crimson (2-1) had not seen in prior games. This proved to be an effective tool for Holy Cross coach Bill Carmody, as Harvard committed 23 turnovers, 12 of which were Crusader steals.

Limiting turnovers continues to be a challenge for the Crimson this season, as it came into tonight’s contest with 33 giveaways in its opening weekend against MIT and UMass. After tonight’s performance, it is evident that little improvement has been made.

“Certainly one of the big things we needed to do—that was the worst thing we did—was to take care of the ball,” coach Tommy Amaker said. “Twenty-three turnovers and their ability to get out of the blocks early put us on our heels. Playing catchup for the evening was the story of the game.”

Sophomore guard Bryce Aiken and forward Chris Lewis, the stars in last Sunday’s victory against the UMass Minutemen, had difficult nights on offense: Aiken shot two-of-nine from the field and made just one three in nine attempts, while Lewis was limited to just two points and three rebounds in 12 minutes of action.

The Crimson did see a bounce-back performance from sophomore forward Seth Towns, who led Harvard on offense with 24 points and added 10 rebounds. Additionally, freshman forward Danilo Djuricic was an important spark off the bench, delivering five blocks and 14 points. Djuricic maintained composure on both sides of the court, as the rookie sunk three triples and fouled only twice in a game in which he assumed the role as the primary low-post defender.

“I feel bad for him but I felt he played his heart out,” Amaker said. “I thought he did an exceptional job of defending around the rim and playing defense on the interior blocking shots without fouling. I thought he was our best player on the floor this evening, and we are going to need other guys to be better in order for us to win on the road.”

The Crimson struggled mightily in the first five minutes of the game, falling behind 12-2.

Additionally, Harvard had trouble guarding the perimeter in the first half. Relying on trap defense and double-teaming its opponents at the three-point line, the Crimson failed on numerous occasions to re-mark open Holy Cross targets and allowed easy attempts from deep. Freshman guards Austin Butler and Caleb Green each knocked down two three-pointers in the first half, while the Crusaders as a team shot 58.6 percent from the field.

Holding a 41-31 lead at the half, Holy Cross appeared to be in total control. However, Harvard slowly gnawed its way back into the contest, wearing down the Crusaders advantage to six points with seven minutes left to play.

Two straight and-one plays by Towns at the 3:51 and 3:25 marks further invigorated the visitors and narrowed the deficit down to five, but both plays were capped off by missed free throws. Although the Crimson as a team shot 10-of-14 from the line in the second half, crucial misses by Towns as well as Djuricic late in the contest made it difficult to sustain offensive momentum.

A pair of made free throws by Aiken with 53 seconds to go brought the game to 68-65, the first one-possession margin since early in the first half, but Holy Cross held on to the lead with perfect free-throw shooting in the final minute.

Five players for the Crusaders scored in double figures, compared to just three from the Crimson. Despite out-rebounding Holy Cross 40 to 27, Harvard trailed in nearly every other statistical category, including field-goal percentage, bench points, assists, and points off turnovers.

“Today, the tougher team won,” Towns said. “Overall, just a lack of toughness and too many turnovers. [We] missed a few free throws at the end. Just a bad day for us.”