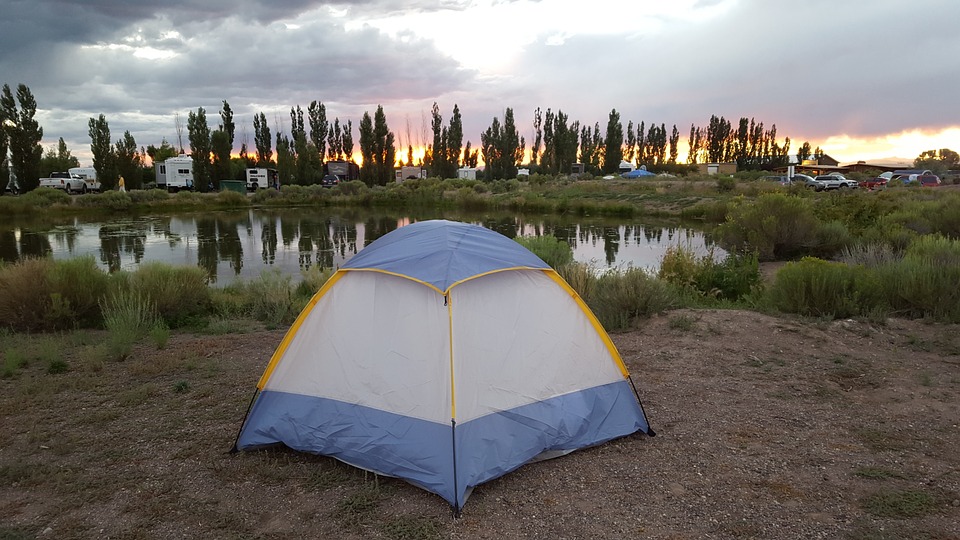 It struck me that the Ridge Top Camp Out lacked something. That it was too planned. Too tame. The Camp Out wasn’t real camping at all (which would be raw and wild), but a simulation of it. It was fake. If real camping prompted a return to nature, the Camp Out boiled down to a staged encounter, a well-choreographed rendezvous.
By Tarpley Hitt

The Ridge Top Swim Club in North Haven, Connecticut has a pool, a jungle gym and a gazebo. It also has some beat-up tennis courts, a snackbar run by an ex-con named Sal, and a large field that would almost be good for soccer if not for the slight incline. Ridge Top offers a range of standard summertime amenities, but my parents, who don’t play tennis or swim really, joined back in 2002 for the discount day camp, the gaggle of old ladies with whom my father played bridge every Sunday, and an annual event that my sister and I fell in love with, anticipating every year with the anxiety we usually reserved for Christmas: the end-of-season, all-club Camp Out.

The Camp Out arrived after a stretch of slow, summer weeks which followed a certain rhythm. Mornings, my sister and I spent hours at the day camp, which consisted of, more or less, a babysitter with an assortment of colorful string for converting into bracelets. Evenings, my parents would meet us for a picnic dinner and then we’d pile in the battered silver conversion van we called simply “The Van,” and head home. By the second week of summer, my sister and I were desperate for a break from braiding lanyards, capturing flags, and weaving hotpads for the kitchen.

But the suspense really mounted in July, when flyers for the Camp Out went up all around Ridge Top. They were unavoidable: The big day bragged on the page in a fat red font; the rain date hid in italics below, dangling the prospect of still more postponement. The design always involved the same stock image: a perfect triangular prism of a tent, a fire, and weenies roasting on a spit, all over a backdrop of cartoonish pine trees. The captions, with the pithy vagueness of a little league coach, alternately implored us to “Get back to nature!,” “Sleep under the stars!,” or “Take a walk on the wild side!”

There were few trees or weenies at Ridge Top and, like our summer schedule, there was nothing wild or unpredictable about the Camp Out. Everything was planned. At 6:00 p.m., families pitched their tents. This was not a gradual process: the field filled with tarps and poles all at once, transforming the slope into a patchwork of beige, navy, and forest green. After the set-up, everyone ate dinners in a public and overlapping way — kids could jump between one table of collards and potato salad to another serving hotdogs, or barter their Capri-suns for cups of red Koolaid. After dark, everyone migrated to a back part of the field, where years ago, someone had dug a fire-pit. One of the parents would build a Jenga-tower of Duraflame logs and get a big pyre going, while kids foraged for long s’mores roasting sticks. (Even in the dark, you could tell who had hit puberty from how they made s’mores. Older kids stuck to the embers, slowly roasting their marshmallows into subtle, golden orbs. Younger kids lit their marshmallows on fire. They would blow out the flames and slip off the charred skin, unveiling a small, soft center.) At eleven, my parents would drive home to sleep in their real bed, while my sister and I roughed it in a paper-thin tent my dad had snagged from a Walmart discount sale. In the morning, everyone unzipped their shelters to a light layer of dew, and a spread of Camper’s Breakfast—coffee, bagels and trail mix. We brushed our teeth in the fully-flushable bathrooms, showered, packed up our tent, and waited for our parents to return with The Van.

We had a good five-year run of Camp Outs before I realized the flaw in this ritual, while sitting in the backseat of The Van. This car, notably, was not a standard suburban minivan, but a massive cargo vehicle with seven seats, fourteen cup holders, a decade of stains, and a small TV squished between the driver and passenger seats. This was my family’s only TV, so it was in The Van that my sister and I first became familiar with Pixar or Martin Scorsese or the soundtrack to Dirty Dancing. Twice a year we made 16-hour slogs to South Carolina to visit our relatives, and on one of these trips my sister and I went on a survival story bender. We watched movies like Castaway, Robinson Crusoe and Jeremiah Johnson. Movies where people take to the wild for real — with little more than worn-in hiking boots, a pocket knife and a gift for tying knots. Where characters are on their own for days at a time, cooking food on spits, peeing behind bushes and leaving no trace. Where they swim in lakes, not pools, and light fires with the friction of two sticks, not vacuum-packed firestarters. They are nowhere near flush toilets or jungle gyms. They do not make s’mores. On this trip, it struck me that the Ridge Top Camp Out lacked something. That it was too planned. Too tame. The Camp Out wasn’t real camping at all (which would be raw and wild), but a simulation of it. It was fake. If real camping prompted a return to nature, the Camp Out boiled down to a staged encounter, a well-choreographed rendezvous.

Ridge Top might have seemed wild to me because I don’t come from North Haven, but the neighboring New Haven, a city eight times its size with half its median income. New Haven isn’t a big city. But it is urban enough that in the 19th century, a landscape designer named Donald Mitchell undertook to make it somewhat less city-like. New Haven is framed by two massive, jutting rock faces and it was Mitchell’s idea to give both back to nature, to let them be reclaimed by trees and vines, and refresh the city with a small patch of rurality. Mitchell and his design firm—run by the famous landscape architect Frederick Law Olmsted—developed the notion of the urban park (Olmsted had first realized his idea in New York; he called it Central Park). Now, Mitchell’s work has surrounded the two rocks with lush green spaces, winding tree-covered trails and rivers dammed into reservoirs. City-dwellers can fish, hike or camp there, while tall trees hide the busy streets nearby.

On one of the trails on East Rock, the closer of the two rocks to my house, the city installed a small gold plaque, engraved with the first sentence of Henry David Thoreau’s famous nature essay, “Walking:”

“I wish to speak a word for Nature, for absolute freedom and wildness, as contrasted with a freedom and culture merely civil—to regard man as an inhabitant, or a part and parcel of Nature, rather than a member of society.”

There is something contradictory about this plaque—an engraved, civically-funded, professionally-installed monument to absolute freedom and wildness—and only more so because there is nothing free or wild about East Rock. Mitchell wanted the park to serve as a “return to nature,” but he had a very particular idea of how that return should play out. Every element of the design was executed in service of a specific vision laid out by his firm’s founder, Olmsted, who employed a method called the “Seven S’s,” for its seven basic principles: Scenery, Suitability, Style, Subordination, Separation, Sanitation, and Service. “All turf, trees, flowers, fences, walks, water, paint, plaster, posts and pillars in or under which there is not a purpose of direct utility or service are inartistic if not barbarous,” Olmsted wrote in one of his manuscripts. “So long as considerations of utility are neglected or overridden by considerations of ornament, there will be not true art.” As Olmsted’s disciple, Mitchell was no Thoreau, sauntering through the woods with abandon, but more of a Daedalus, the master artificer parading around a maze of his own making.

Implicit in the notion of camping, of hiking, of fishing, at least when performed by city-dwellers whose lifestyle does not rely on those practices, is the belief that getting “back to nature,” getting closer to it, prompts a return to a simpler, more germinal state of being. To that condition Thoreau describes as “a great awakening light, as warm and serene and golden as on a bankside in autumn.” I don’t mean to suggest that there is anything wrong with natural activities, or even that they are any less pleasant than advertised, only that to bluntly oppose them to the “freedom and culture merely civil,” as Thoreau does, is deceptive. Or at least requires a suspension of disbelief.

Take, for example, my first real camping trip. In high school, I hiked a part of the Appalachian trail with a small group. On the first night, we stopped in a clearing. I set up the same Walmart tent my sister and I had slept in all those summers, and built a fire from newspaper, nearby twigs and a little lighter fluid—I didn’t rub sticks. We prepared a dinner of sandwiches and s’mores. I wore worn-in hiking boots. The next morning, as we packed up, a friend pulled the surviving scraps of newspaper out of our makeshift fire pit. “Leave no trace,” he said. “We have to leave the landscape as we found it.” He put the scraps in a ziplock bag he carried in his backpack. As he spoke, I realized my friend had said the thing that I had always felt, had spilled the secret, had let slip what Tom Wolfe called the “seemingly innocuous words in passing, that give the game away.” He had admitted, while upholding the cardinal rule of camping, that we were pretending, that our return to nature was part charade. That in entering the wild, we were still outside it. We risked leaving relics, of staining nature with culture merely civil, at every turn. As we continued our hike, we kept collecting traces: slipping newspaper, toilet paper and food scraps into baggies and tossing dirt over our firepits.

There is something undeniably satisfying about camping: a delicious feeling of self-sufficiency, a moment of reprieve from everyday life, an occasion to eat s’mores. But no matter how you shake it, the act is a subtly choreographed affair. There is no rupture from culture merely civil: humans are culture merely civil; our presence implies it. To camp—to leave your bed for the forest, to eat food you catch rather than buy from the butcher—implies the civil and natural spheres are two separate things, and separate enough that you could take leave of the former and immerse yourself in the latter. I’m not convinced. Real camping was no more natural than Ridge Top. For those five days, as we wormed our way through the rocky terrain, we lived somewhat off the land, but mostly off trail mix. At one point, I caught a fish. Then, I cooked it on a portable grill and added the bones to my collection of trash. At the end of the trip, my parents picked us up in The Van.