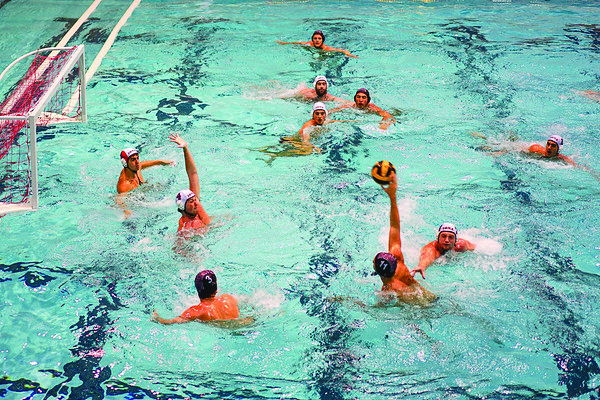 Freshman 2-meter Jackson Enright shoots against Iona earlier this year, who the team dispatched easily again this weekend in the first of three Harvard wins. Now the Crimson will look to go far into the NCAA tournament last year and match its performance when the team won its way to the Final Four. By Gabriel C. Cederberg
By Ginny Miller, Crimson Staff Writer

The co-captains entered the program in the midst of coach Ted Minnis’s historic reformation, from only 12 wins in his first season to a program-best 27 wins last year.

From seventh to back to back champions, the two seniors are leaving conference play on top for the second straight year after toppling Princeton in sudden death overtime in front of a packed Blodgett Pool on Sunday afternoon. Now Harvard moves onto the NCAA tournament, where the team made the Final Four last year.

“Blyashov is a great kid first and foremost. I love having him on this team and being part of our family,” Minnis said.

“He works so hard and is so passionate about everything he does in and out of the pool. He has a drive, a passion that you only see from special players. I’m just glad we have him for three more years.”

The Tigers took command early, jumping to a 5-1 lead after just six minutes of play.

Blyashov scored the first two goals of the game for Harvard, but it wasn’t enough to dent Princeton’s early lead.

The Crimson played cool, and the team started to slowly chop away at Princeton’s lead. With only four minutes left in the fourth quarter, Harvard was down 10-8. It was a fight for every possession.

A power play goal from sophomore Charlie Owens brought the Crimson within one, right before Harvard’s game-tying 10th goal with only 52 seconds left in regulation.

In overtime, Tafur struck first, but the Tigers answered with one of their own to force a sudden death overtime. Blyashov then delivered the game winner just inside the far post to win the title at home.

Facing its first real test of the weekend the team defeated No. 18 St. Francis, 9-7, to advance to the conference finals.

In the first quarter neither team was able to claim an advantage with each side scoring three goals each, setting up a tight match down the stretch.

The Terriers were able to pull ahead in the second with four goals to Harvard’s two.

The Crimson was able to change the tide in the second half thanks to an air tight defense and an impressive 11 saves by Ridgely to stymie to ds St. Francis.

“On our team, our defense feeds our offense, so we made sure we weren’t thinking too far ahead, taking everything one possession at a time,” Tafur said. In the third quarter, goals from Blyashov and Owens leveled the score at seven.

Harvard pulled ahead in the fourth with go-ahead goal from Enright and Blyashov got on the board one last time to secure the win.

In the first matchup of the weekend, Harvard squared off against six-seed Iona and handily defeated the Gaels 16-7.

“We talked all week about how this was going to be the tone setter and… if we wanted to win a championship we had to play 12 good quarters,” Minnis said. “We jumped out to an 8-1 lead on them and kind of just went from there.”

The Crimson dominated play from the get go, scoring four times in the first period while blanking Iona.

Blyashov netted the first goal of the game, and totalled 5 more across the four quarters.

Juniors Grayson Judge and Grant Harvey also scored once a piece in the first. Between the posts, junior Anthony Ridgley and sophomore Nikhil Suri split time and recorded 5 and 7 saves, respectively.

“It was awesome to win in the home pool,” Tafur said.

—Staff writer Ginny Miller can be reached at ginny.miller@thecrimson.com.