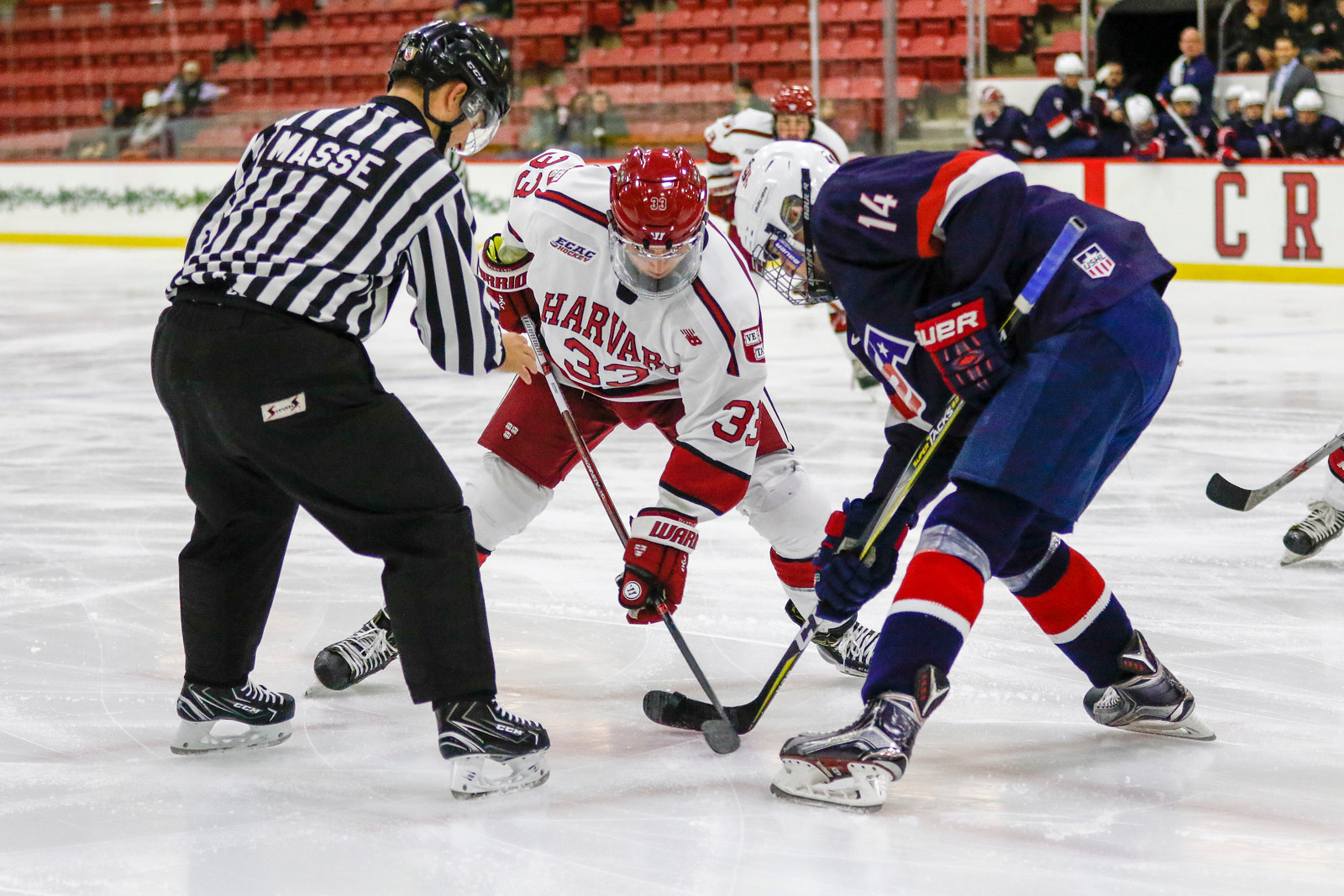 While most students were recuperating from Thanksgiving dinner, players on the Harvard men’s hockey team were not afforded as much time to recover from the turkey-induced coma.

Although BC held a lead for much of the back-and-forth contest, Harvard outshot the Eagles, 32-21, and played a more complete, 60-minute game like Crimson coach Ted Donato ’91 had been looking for entering the tilt.

“I thought we did a lot of good things,” coach Donato noted. “Quite honestly, we’ve played well…for a few games but haven’t got the results that we wanted, almost all the way back to the Cornell game. We’re never happy with the tie, but when we’re down 4-3, we’ll take it.”

In Friday’s Beantown battle, the two teams capitalized in different ways offensively. For Harvard, depth scoring was the key. Meanwhile BC leaned heavily on its top forward trio, composed of sophomores David Cotton and Julius Mattila and freshman Jacob Tortora.

The Eagles premier line was involved in all four BC goals and combined for all 11 points scored by the home team in the matinee at Conte Forum.

A late-game goal from freshman forward Jack Badini helped Harvard halt its losing skid at four games, the longest such stretch in over three seasons.

With the team breaking out of its defensive half of the ice, the rookie received the puck in stride from sophomore linemate Nathan Krusko and cut through four BC defenders. Displaying his speed, Badini broke into the offensive zone clean and, after fending off two trailing Eagles players, sent a puck over the left shoulder of goaltender Joseph Woll.

The regulation equalizer proved to be the last score from either side, as five minutes of overtime could not help determine a victor.

While just a freshman, Badini is becoming an integral component of the Crimson attack. The Anaheim Ducks prospect has five points through eight games this season, including four in the last three contests.

“Each game I’ve played, I’ve felt a little more confident with the puck,” Badini said. “It’s nice to get on the score sheet a little bit, but I think it’s just kind of a byproduct of the hard work.”

The Old Greenwich, Conn., native saw his first promotion in his young tenure as a Harvard iceman. Coach Ted Donato ’91, looking to rejuvenate his squad after a pair of winless weekends, moved Badini up to the second line on Friday. The center took full advantage of the extra ice time, notching his first career three-point performance

“Obviously, [the second line] scored the big goal there to tie it up,” coach Donato said. “I thought they were excellent all night, but Jack had a big night. It looked like he had his wheels going and I thought he caused some issues with his speed.”

Badini’s ascent in the depth chart was not the only tweak the Crimson’s roster underwent. For the first time this season, drastic changes were made to the defensive pairings, as freshman Reilly Walsh was slotted in next to towering senior Wiley Sherman, junior Jacob Olson was scratched in favor of now-healthy Viktor Dombrovskiy, and sophomores Adam Fox and John Marino found themselves with new linemates. 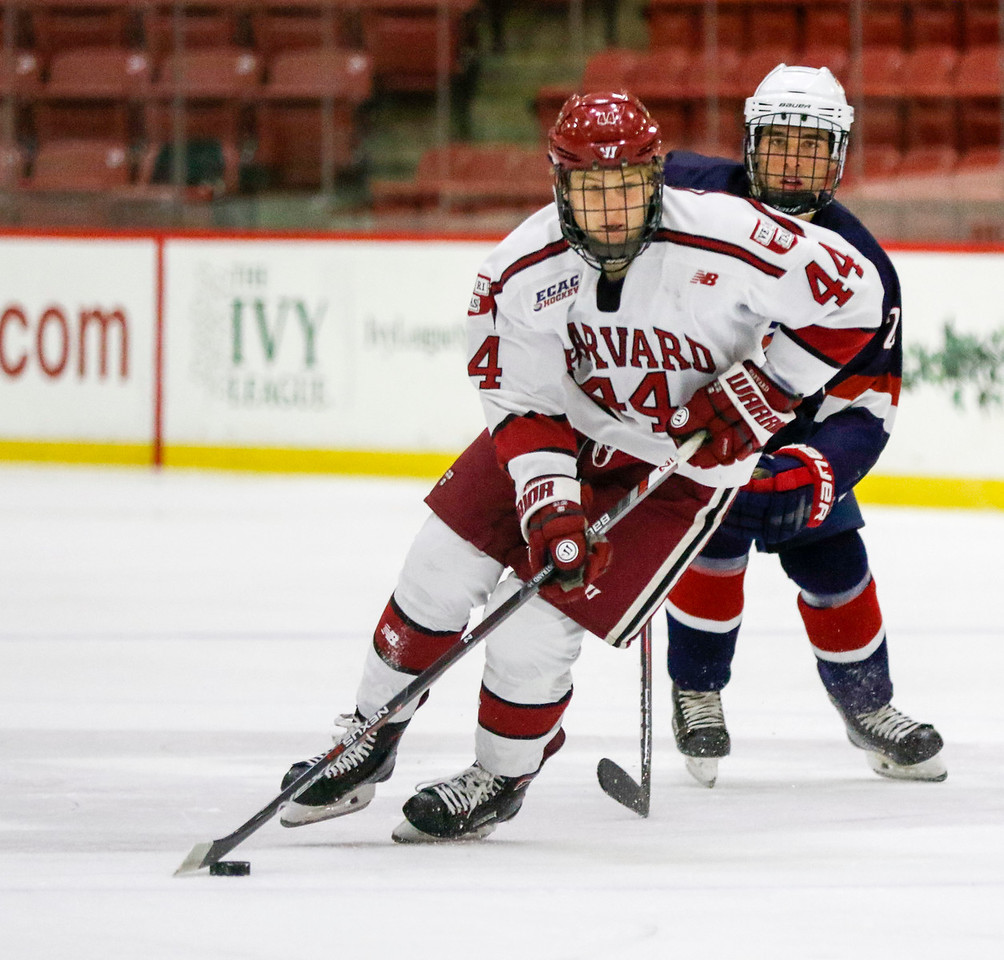 Junior forward Michael Floodstrand scored his first of the year while shorthanded, thanks to a solid effort from PK partner Ryan Donato and a fortuitous rebound. By Timothy R. O'Meara

In the forward ranks, sophomore Colton Kerfoot, brother of last year’s captain Alexander, took the ice for the first time this season after playing in one tilt in his rookie campaign. Additionally, freshman Benjamin Solin was bumped up a line to play alongside tri-captain Jake Horton and junior Michael Floodstrand on the third line.

“We’ve been close and had some opportunities to get our depth going as far as scoring [goes], and tonight was a good step in that direction,” coach Donato said.

While the new third line did not produce as an even-strength unit, individuals within the trio had solid special teams showings in the cross-town bout. Solin tallied his first goal in a Harvard uniform while on the power play, and Floodstrand found twine for the first time this season on a zealous shorthanded effort along with fellow penalty killer Ryan Donato.

Donato rushed down the right wall and into the zone before cutting in on Woll and attempting to punch one in. Two BC skaters converged on Donato as he got closer to Woll, but Floodstrand picked up the rebound and took the puck behind the cage for a wrap-around attempt. A sprawling Woll made an unlikely save on Floodstrand’s first try, but the junior buried the juicy rebound after Woll went to the splits.

The shorthanded tally gave the Crimson its only lead of the game—one that would last for all of nine seconds before the Eagles equalized on a Mattila snipe from the high slot.

Aside from Badini and Floodstrand, Harvard benefitted from other key performances on Friday. Krusko was all over the score sheet, finishing the game with three assists. Also, junior blue-liner Adam Baughman recorded his first career goal early in the second period to open the scoring for the Crimson.

An assist on Floodstrand’s shorty helped Donato, who otherwise had a relatively quiet game, extend his season-long point streak to eight contests.

“We showed a lot of character,” coach Donato said. “Hopefully, this will be something to look at and say, ‘Hey, this was the first step in the right direction for us as a team.’ On the negative side, it seems like we made a lot of our own problems for ourselves.”