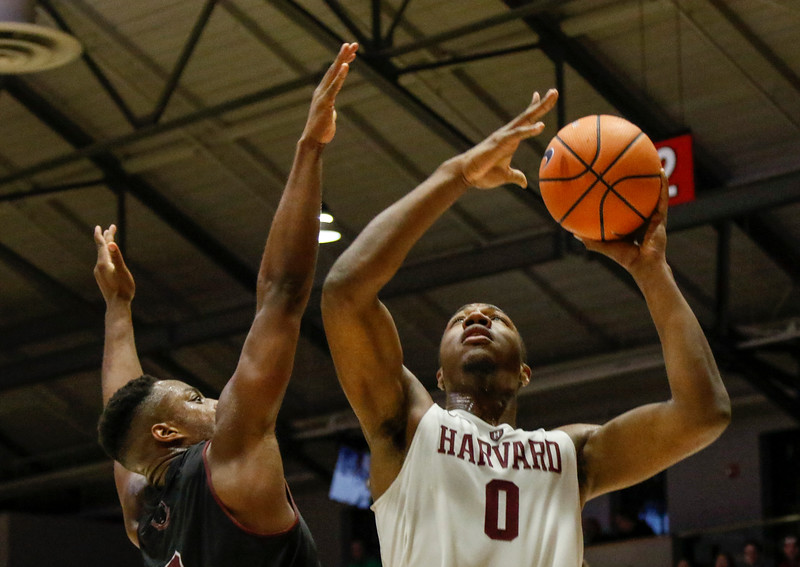 Despite 18 points from sophomore Chris Lewis and 22 from classmate Bryce Aiken, Harvard couldn't overcome a difficult first half en route to a 89-71 loss to St. Mary's By Timothy R. O'Meara
By Troy Boccelli, Crimson Staff Writer

Just over three minutes into the first half, St. Mary’s center Jock Landale set a high screen and rolled hard to the basket—senior guard Emmett Naar slipped a pass through the defense and Landale threw down a fierce dunk over the outstretched arms of junior guard Corey Johnson.

The dunk and the ensuing free throw from Landale capped an early 9-0 run that put the No. 21 Gaels up 10 less than three minutes into the contest.

In a first half in which Harvard couldn’t seem to buy a basket, the emphatic dunk from Landale would be indicative of what was to come from St. Mary’s.

Despite a second half resurgence from the Crimson, Harvard (2-3) couldn’t overcome a half in which it shot 27 percent from the field and nine percent from beyond the arc. Anchored by Landale, who finished with a game-high 26 points to go along with seven rebounds, the Gaels (5-0) outlasted the Crimson in the first round of the Wooden Legacy, 89-71.

“St. Mary’s is an outstanding team and we knew that coming in,” Harvard coach Tommy Amaker said. “They’re one of the best teams in the country and you can see why I’m probably saying that, how efficient they are inside out, their balance is tremendous. We have a great deal of respect for their program and certainly how they play.”

After jumping out to a 12-2 lead courtesy of the 9-0 run, the Gaels only continued to build their lead as the Crimson struggled to find the bottom of the net—over a four-minute span midway through the first period Harvard failed to score while turning the rock over three times. Over that same span, St. Mary’s went on an 11-0 run to take a 23-7 lead that would prove to be too great for the Crimson.

After averaging nearly 25 trips to the line per game, Harvard just couldn’t seem to make it to the charity stripe on Thursday. In the first half, the Crimson managed to only get to the line twice while finishing with 14 free throws on the game.

The Gaels, for their part, pounded Harvard in the interior. St. Mary’s went to the line 32 times, converting on 30 of the attempts. In particular, Harvard struggled to find an answer to Landale’s presence in the post.

“He’s one of the better post players in the country, he’s very savvy, he’s crafty in terms of his ability to find cutters, he uses angles very well, shot fakes.” Amaker said. “He’s got the total package for a low post guy and you can see what he was able to do from the foul line and I think he might be one of the weakest free throw shooters on their team and he went 12-for-13.”

All told, the Gaels shot 50 percent from the field and 40 percent from three in the first half to take a commanding 46-20 lead. The 20 points marked the lowest halftime total for the Crimson this season.

Anchored by a potent presence in sophomore forward Chris Lewis, Harvard closed the deficit early in the second frame. Led by Lewis and classmate Seth Towns, the Crimson rattled off 12 uncontested points to pull within 14 three minutes into the second half.

“They said they were going to feed me the ball inside and that gave me the confidence to be able to do what I did, be able to work inside, pass the ball out, try to make the play for my team,” Lewis said. “Bryce, Justin, Seth, Corey, they were all throwing it inside, and the trust we all have in each other is what helped us fight back in the second half.”

Out of a 30-second timeout, however, the Gaels put the game out of reach for good with six uncontested points to take a 20-point advantage.

Lewis finished the contest with 18 points on 8-of-12 shooting from the field. After scoring only two points in the first period, sophomore guard Bryce Aiken scored 20 in the second half.

“They’re so efficient in making their opening shots, but we made a point of emphasis to try to play through Chris and we thought it was a big plus for us to post the ball to him and play from there,” Amaker said. “By the time we really honed in on that we were looking at a big deficit that was pretty hard to climb out of.”