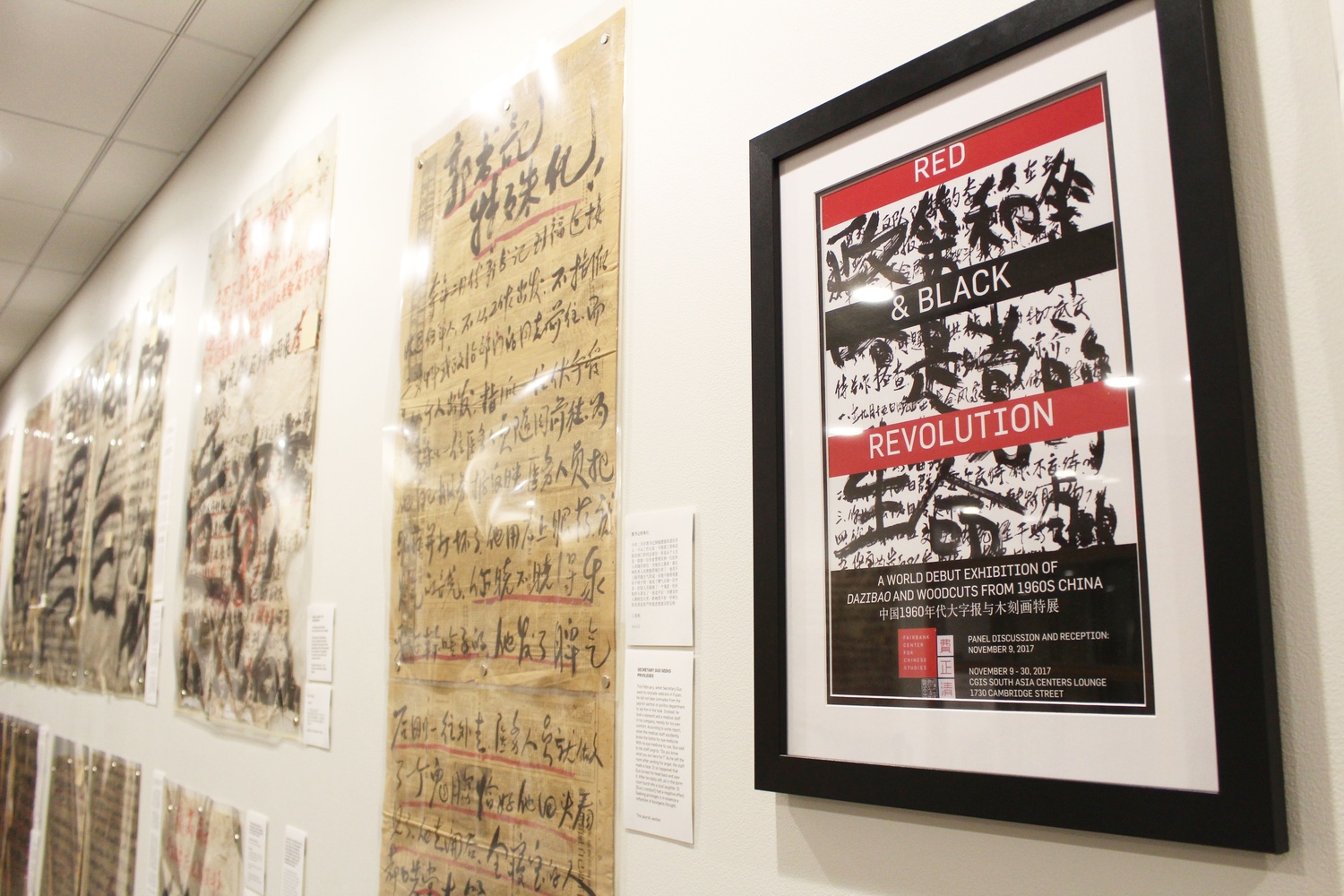 A world debut of an exhibit of dazibao and woodcuts from 1960's China is on display in the CGIS South Asia Center's lobby. The exhibit is entitled "Red & Black Revolution." By Lauren A. Sierra
By Sonia Kim, Crimson Staff Writer

Long-hidden posters and woodblock prints from the years of China’s Cultural Revolution now adorn the walls of Harvard’s Fairbank Center for Chinese Studies.

The pieces, part of an exhibit called “Red and Black Revolution: Dazibao and Woodcuts from 1960s China,” were unveiled at the Fairbank Center in early November, marking the first time members of the public can see these prints.

During the Chinese Cultural Revolution, government officials sought to purge the country from all traces of capitalist thought. The posters—also called dazibao—were a crucial medium to criticize and discredit individuals who were thought to oppose the revolution.

An anonymous collector donated the dazibao to the Fairbank Center, according to Susan Israel ’81, who first thought of bringing the prints to Harvard. Center staff have also organized a four-part blog series to accompany the exhibit.

The exhibit opened at the beginning of November with a panel discussion on the history of dazibao featuring Harvard professors and other scholars.

Fairbank Center Director Michael Szonyi moderated the event, and said the dazibao, which he called “powerful visual symbols of the cultural revolution,” will be the main focus of the exhibition.

“Whether one sees these big-character posters and woodblock prints primarily in aesthetic terms, or treats them as historic relics or as objects that provoke conversations about China’s complex relationship with the past, we think they are worthy subjects of research and analysis,” he said.

“Because big character posters have big characters that can be legible from a distance even though of course some of them are for pure display, they competed for public attention,” Li said.

“They are also remembered as ‘blotting out the sky and covering the Earth,’” she added, referencing the posters’ omnipresence in 1960s China.

Given the sensitivity of some of the messages written on the dazibao, the exhibit’s curators decided to conceal the names of individuals mentioned on the posters,

“Many of these individuals are either still living, or have living relatives who may view these works, and so we have obscured their names for ethical reasons,” said James Evans, the center’s communications director.

The exhibit, which has been on display since November 9, will run until Thursday.