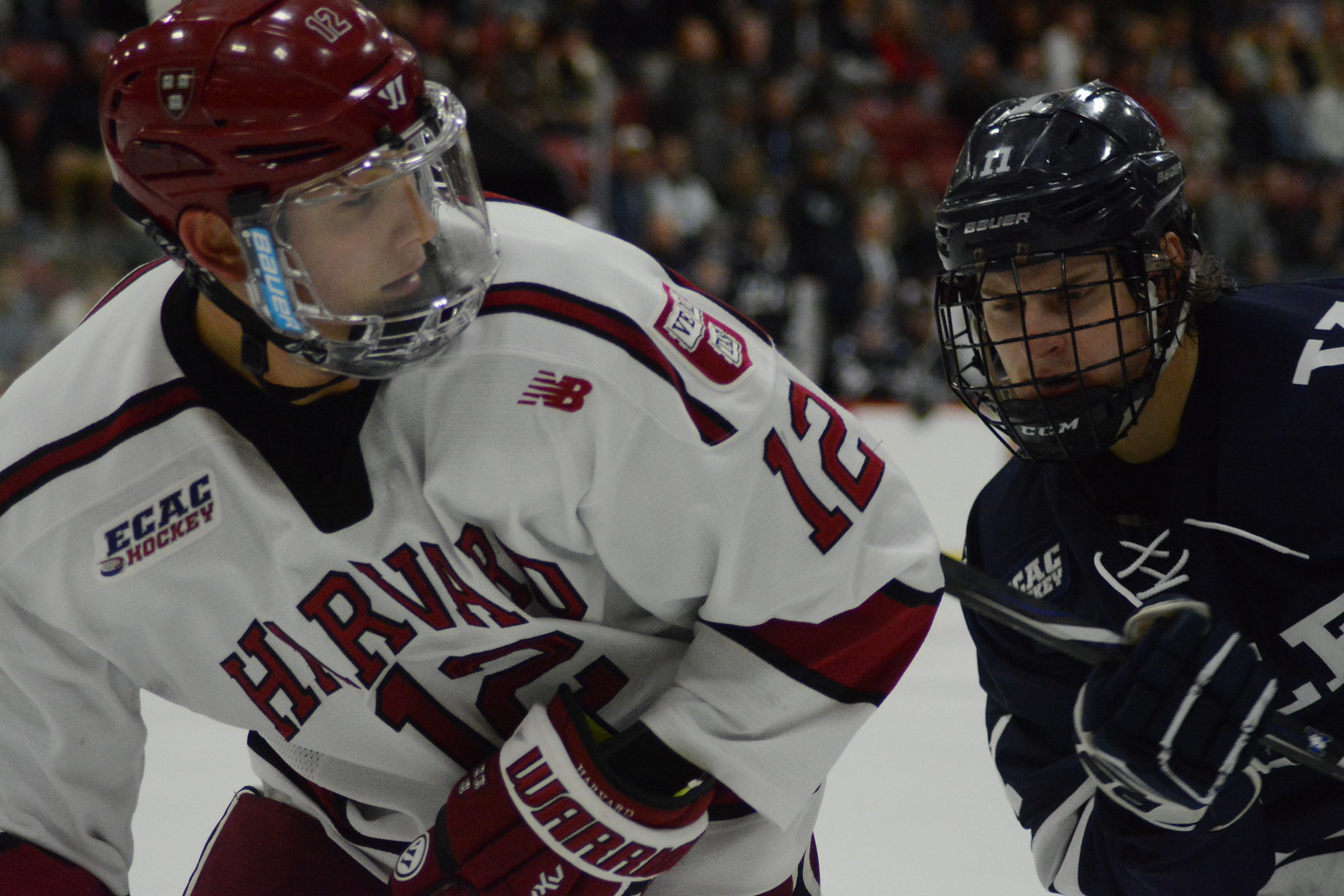 Cambridge is a cozy place this time of year: the leaves are turning, and the weather evokes a homey vibe. But the Harvard men’s hockey team better not get too comfortable.

After a weekend of Ivy League play, the Crimson (2-1-0, 2-1-0 ECAC) is done playing at home until 2018. Despite the urge to relish its final game in Cambridge for two months, Harvard showed little hospitality to visiting Brown on Saturday night.

Looking to avenge a disappointing loss to Yale the night prior, the Crimson achieved the weekend split by topping the Bears (1-3-0, 1-3-0) in a shutout effort, 3-0.

“We’re going to look back and probably be upset with the weekend in general,” tri-captain Merrick Madsen admitted. “But I think it showed a lot [about] our character...to come out tonight and show that we can play to our identity and what we’re made of, I think that’s huge for us.”

After an eventless first period, freshman Reilly Walsh potted his first NCAA goal to break open the scoring. Fittingly, the offensive defenseman buried the in-close wrister on the power play, a staple of his game and an area to which he promises to contribute this season.

Walsh’s goal proved to be the game-winner in the Crimson’s blanking of the Bears, but just to be sure, the rookie added some insurance in the third period. On a crisp wheelhouse feed from sophomore point man Adam Fox, Walsh sniped a one-time goal from the right circle and in doing so notched his first-ever multi-point—and multi-goal—game.

“We got out and played a little bit more to our game,” Madsen said. “When you have [Reilly Walsh] on the power play scoring goals, it helps a lot.”

The New Jersey Devils prospect now has four points through just three contests in this young campaign. After graduating 50 percent of last year’s scoring, Walsh’s creative offensive style could be just what Harvard needs to account for these losses.

In the game’s final minutes, sophomore Nathan Krusko floated a seemingly harmless puck toward the net. The nonchalant shot ended up fooling Brown goaltender Gavin Nieto and snuffed out any chance of a Bears comeback.

The only players who truly enjoyed the first frame were net-minders Nieto and Madsen. While shots were plentiful, with the Crimson outshooting the Bears 13-8, the cage-dwellers stood tall and the opening 20 minutes ended in a scoreless stalemate.

Madsen, who allowed five goals in Friday’s contest against Yale, was hoping to return to his normal form with a strong performance against Brown. And that he did.

“Merrick was outstanding tonight,” coach Ted Donato ‘91 noted. “It’s hard to win without having a great night from your goaltender…. Merrick has built a pretty good book on being able to play winning hockey and come up with some big saves, so we’re happy to see him play real well tonight.”

Madsen, who pitched his second shutout in just three games this season, now has nine clean sheets over the course of his career. Like last year, the 6’5” tender hopes to finish the campaign among the NCAA’s top 20 in goals against average and save percentage, while also expanding his leadership role as captain. 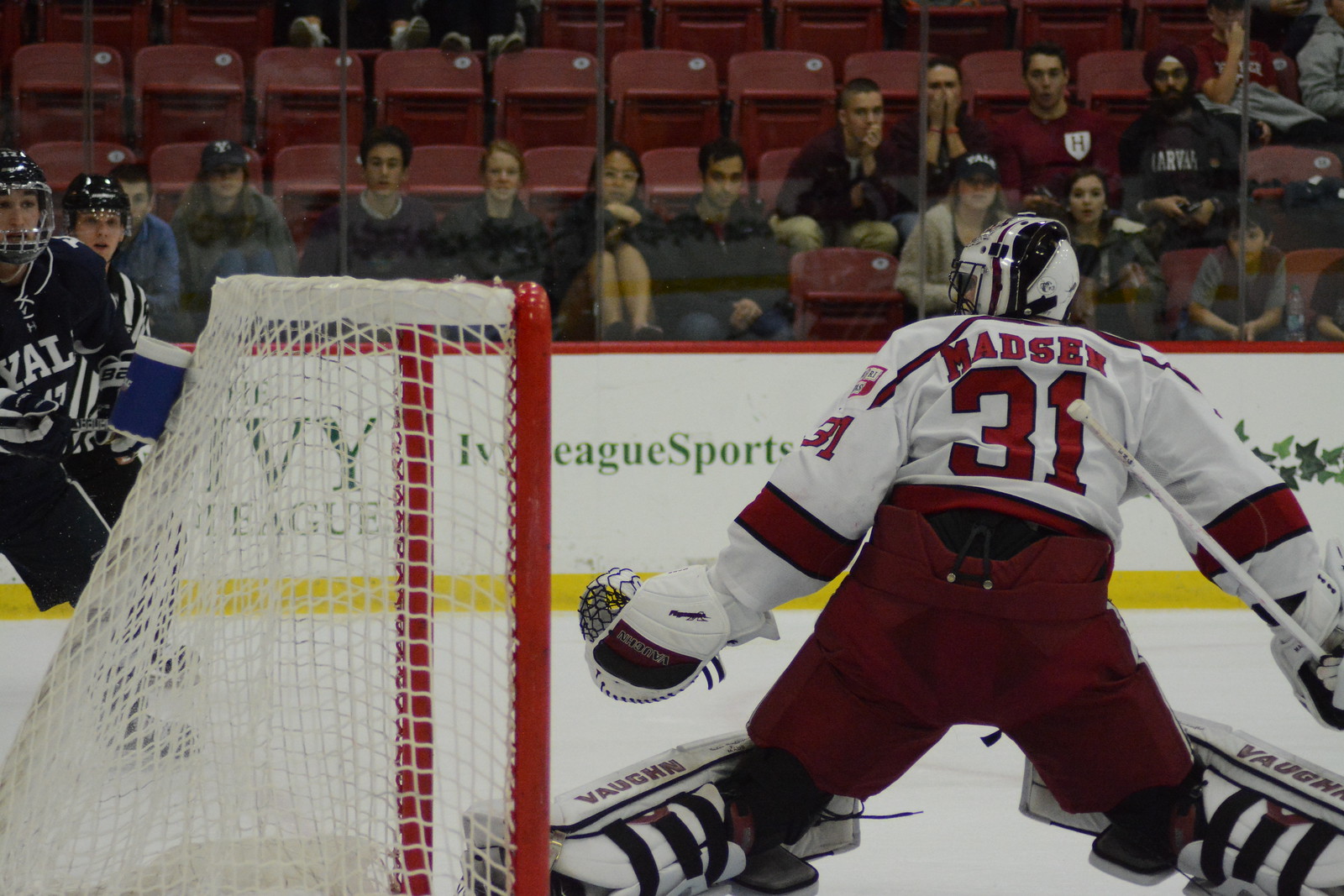 Tri-captain Merrick Madsen had a rough night on Friday at the hands of Yale. He brought an extra level of intensity to the Crimson's bout with Brown. By Amanda M. DiMartini

“The way [Madsen] talks and coaches, even as a goalie, is definitely incredible,” Walsh lauded. “The way he cares about his studies and the way he handles himself on and off the ice definitely sets a great example for all of us.”

The Arizona Coyotes prospect was tested from the outset, as the Bears peppered Madsen with shots right from the drop of the puck. Early on, play mostly occurred in Harvard’s zone thanks to a few untimely penalties, with Brown recording six of its eight opening-frame shots in the first five minutes. In that span, Harvard failed to put a single shot on Nieto.

“There were certainly a couple stretches where Brown has some runs of shots,” coach Donato said. “But overall, [we’re] pretty happy. This is a young group that has to learn how to win these types of games—having a one-goal lead in your own building going into the third.”

In the period’s remaining 15 minutes, the Crimson caught and surpassed the Bears’ early lead in shots, receiving some calls in its favor and establishing the power play. While the special teams unit could not convert on its first two attempts, it finally got going when Walsh broke the scoreless tie.

Some new faces cracked the lineup on Saturday for Harvard. Freshman Benjamin Solin made his college hockey debut playing alongside tri-captain Eddie Ellis and sophomore Frédéric Grégoire. The Madison, Conn., native replaced his classmate Mitchell Perrault, who started the season at the right wing spot for the Crimson.

Coach Donato made another roster change for the Brown game. Junior Adam Baughman filled in for rookie Benjamin Foley on the back end, after Foley’s misstep on Friday night cost Harvard the game-winning goal in the second period. Donato noted, however, that this decision had nothing to do with the slip-up.

“We’re fortunate to have some guys who are pushing right at the edge of the lineup,” coach Donato said. “We need to continue to evaluate…. There’s certainly a possibility that there would be guys in and out of the lineup, even if we’re playing well, just to keep guys in the mix and keep the competition at a high level.”

This season is already showing the typical parity found in the ECAC. While Harvard was in action at the Bright-Landry Hockey Center on Saturday, fellow ECAC rival Dartmouth, whom the Crimson defeated last week, triumphed over the same Yale team that nabbed a victory in Cambridge this weekend. Additionally, Brown, another of Harvard’s victims early on this season, split games with the Bulldogs this year.