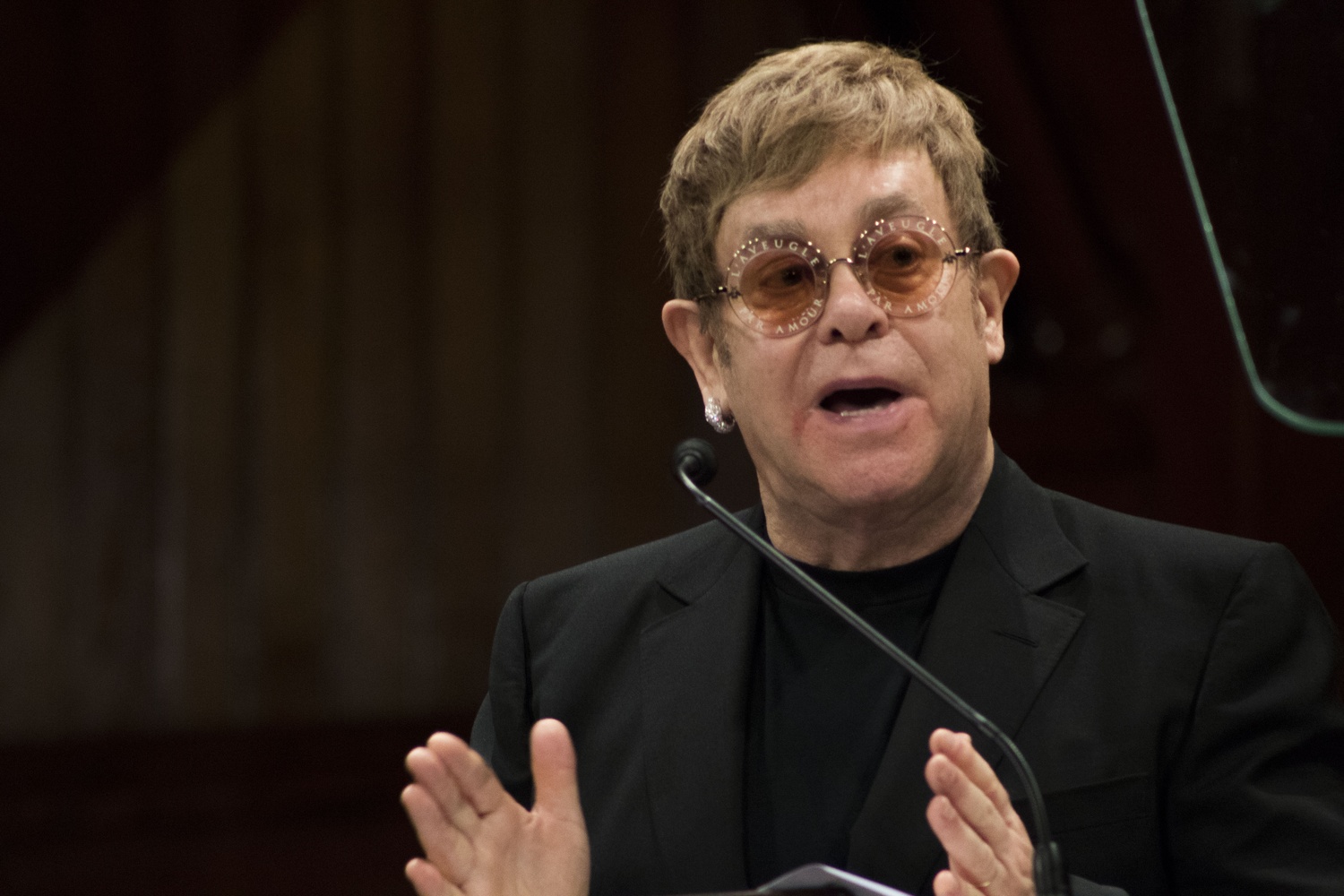 Sir Elton H. John accepts the Harvard Humanitarian of the Year award for his work addressing the global AIDS epidemic. By Lauren A. Sierra
By Samuel W. Zwickel, Contributing Writer

In front of a crowd of nearly 1,000 cheering Harvard affiliates, Elton John was named 2017 Harvard Humanitarian of the Year Monday afternoon in recognition of his work in support of HIV/AIDS research and awareness.

In a speech accepting the award, the English singer, songwriter, and entertainer urged members of the crowd to advance world peace by recognizing the humanity in one another.

“This has been the most important lesson of my life; nothing is more profound or more powerful than recognizing our common humanity,” John said, calling it the “most powerful force on earth.”

The award—presented annually by the Harvard University Foundation for Intercultural and Race Relations—highlighted John’s work through the Elton John AIDS Foundation, an organization which has raised more than $385 million for HIV/AIDS awareness, prevention, and research since its inception in 1992.

Dean of the College Rakesh Khurana, after a characteristic introduction reflecting upon the College’s mission, praised John, saying, “Sir Elton John is a living embodiment of that Harvard College mission statement. He has used his gifts and talents to serve the world.” 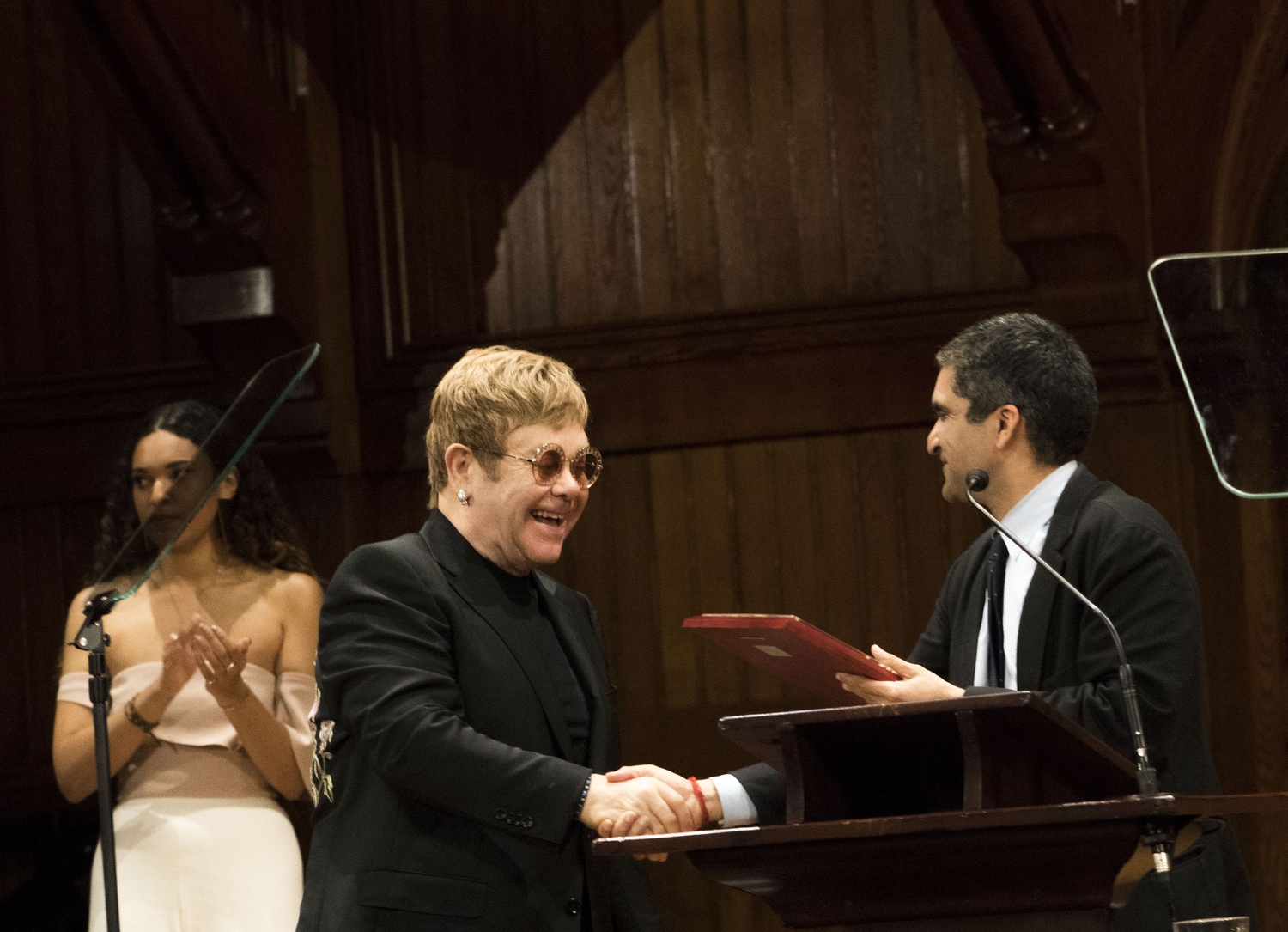 Sir Elton H. John accepts the Harvard Humanitarian of the Year award for his work addressing the global AIDS epidemic. By Lauren A. Sierra

After a standing ovation, John said he wished to dedicate the award to people working at the front lines of tackling the HIV/AIDS epidemic, calling them “the bravest and most compassionate people I have ever met.” Throughout his speech, John shared pieces of wisdom from his life and career.

“I was so lucky early in life when I discovered a love of music,” he said, explaining how he clung to music for solace during times his parents didn’t get along. John said exposure to artists such as Little Richard and Fats Domino shifted his path away from classical piano performance and toward becoming one of the most decorated rock and roll artists of all time.

The Humanitarian Award is hardly John’s first decoration. He has been awarded the Grammy, Tony, Golden Globe, and Academy Awards, and is a Rock and Roll Hall of Fame inductee. His “Candle in the Wind 1997” is the best-selling single since music charts began.

But in Monday’s speech, John did not shy away from discussing less illustrious moments of his life.

At the peak of his career, “happiness became elusive, and darkness crept in,” John said, referencing his past struggles with drugs, alcohol addiction, and an eating disorder. “It was through humanitarian pursuits that my life took on vastly new meaning,” he said.

It was at this time that John worked to support the family of Ryan White, a high school student barred from his school in the 1980s upon being diagnosed with AIDS. John said working with White’s family was the catalyst for both his sobriety and the creation of the Elton John AIDS Foundation.

“I wanted to help them, but they ended up helping me far more,” John said. “Seeing how they dealt with adversity through getting to know them inspired me to turn my own life around.”

Krasimira Petkov, who attended the event, was thrilled to see John be given the award.

“I honestly think he’s one of the greatest picks; I mean, he has a lifetime of achievements that are honored here, so that’s wonderful,” she said.

In their speeches, both John and Khurana paid tribute to the late Dr. S. Allen Counter, founding director of the Harvard Foundation for Intercultural and Race Relations, who passed away in July.

Kacey Gill ’20, an intern at the Harvard Foundation, said Counter’s legacy lives on through this year’s presentation, given that he chose John as this year’s recipient shortly before his death.

“I think it’s really important Dr. Counter chose this humanitarian before he passed, and I think it’s just amazing to see his vision brought into fruition,” she said.

A previous version of this article misspelled Kacey Gill's name.