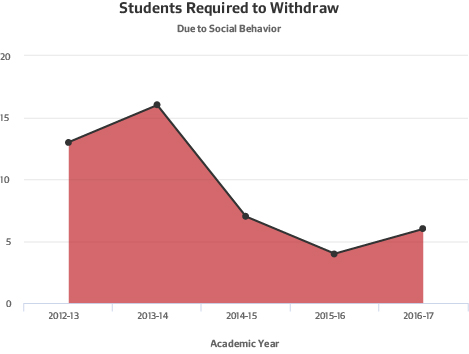 The Administrative Board required six undergraduates to temporarily withdraw from the College for "social behavior" related to alcohol, drugs, or sexual activity in the 2016-2017 academic year, a slight increase from 2015-2016, according to caseload data released by the disciplinary body.

The Ad Board also placed 22 total students on probation in 2016–2017—13 of them for social behavior—according to the statistics, which the body releases on its website every year. The Ad Board, composed of Faculty and administrators and chaired by Dean of the College Rakesh Khurana, reviews undergraduates’ academic records and enforces standards of social conduct laid out in the Harvard College student handbook.

In 2016–2017, the Ad Board issued “House warnings” to eight students for social behavior related to alcohol, marking a five-year low and a sharp decrease from the 25 such warnings the body issued last year.

But the vast majority of the body’s work involves evaluating student requests for exceptions to academic rules—like petitions for leaves of absence or exam conflicts. In 2016–2017, the board approved 1,640 such petitions, the highest number in the last five years.

The statistics on leave of absence do not include students studying in other countries or taking leaves mandated by administrators.

Notably, 204 students petitioned the Ad Board for permission to study abroad during the 2016–2017 academic year, representing another five-year high.

Camila L. Nardozzi, director of the Office of International Education, said the number of students who actually chose to study internationally is much lower. She said that, while interest in study abroad has increased in recent years, many students rescind their applications after they submit petitions.

“What you see in the Ad Board is not indicative of the students who actually study abroad because we have a lot of attrition,” Nardozzi said. “The interest in study abroad has increased pretty drastically; students are at least considering it as a very real option.”

Nardozzi said she thinks there is no clear explanation for the uptick in student interest in other countries.

Ad Board Secretary Lauren E. Brandt did not respond to a request for comment.

The Ad Board used to serve as the College’s primary disciplinary body, hearing cheating cases in addition to its other responsibilities. But in 2015, the Faculty of Arts and Sciences established a new student-faculty judicial group—the Honor Council—to adjudicate academic dishonesty at Harvard.

The Council released its own report in October 2017 revealing that “inappropriate collaboration” cases doubled between 2015–2016 and 2016–2017. The spike in cheating comes the same year that a cheating scandal in Harvard’s flagship introductory computer science course swept campus: More than 10 percent of students who took Computer Science 50: “Introduction to Computer Science I” in fall 2016 appeared before the Council.