The No. 5 Crimson will visit Colgate on Friday before facing off against No. 14 Cornell the following evening 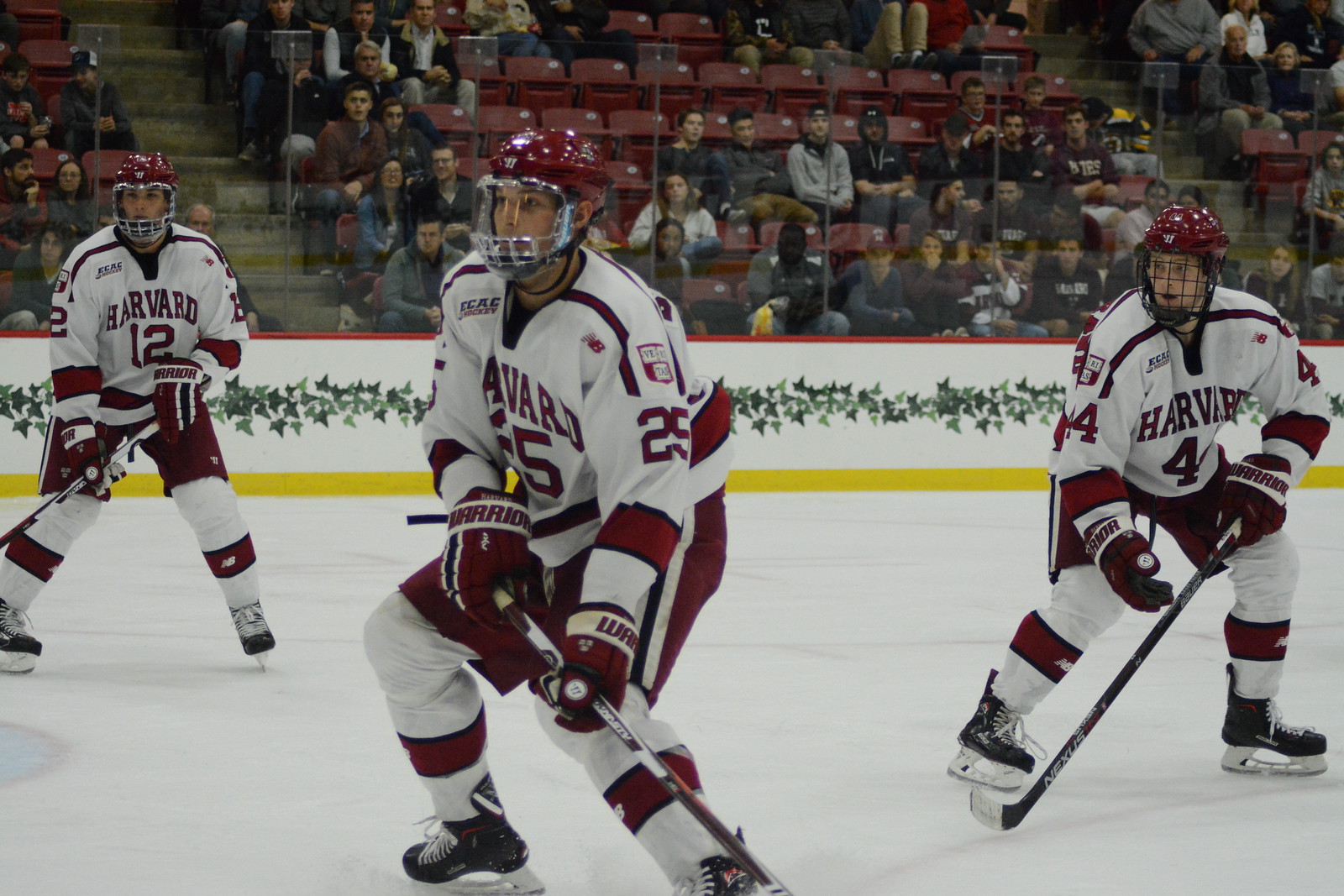 Harvard will kick off the road portion of its schedule with a weekend trip to upstate New York. Saturday's showdown with Cornell marks the start of the Crimson's most challenging stretch of games all season. By Amanda M. DiMartini
By Spencer R. Morris, Crimson Staff Writer

If you want to hang with the best teams, you have to be able to play in their rinks.

The Harvard men’s hockey team certainly considers itself among the NCAA’s elite—so does the USCHO poll, in which the Crimson ranks fifth this week. And now, Harvard (2-1-0, 2-1-0 ECAC) will have a chance to justify this ranking as it takes to the road for a program-record nine straight contests.

Each game provides its unique challenges. In its first away test of the season, the Crimson will confront a red-hot Raiders goaltender in sophomore Colton Point. The following evening, Harvard will play in arguably the rowdiest barn on its schedule, the animated Lynah Rink in Ithaca, N.Y.

Starting the campaign with three Ivy League home contests, the Crimson was hoping to hone its systems and chemistry a bit more than it did. A 5-2 loss to Yale (2-2-0, 2-2-0) tainted the home stand and exposed some areas in need of improvement.

Whether Harvard has improved in these facets or not, the meat of the schedule—marked by five consecutive bouts with ranked opponents—is fast approaching.

“I’m excited to go on the road. We have, I would say, five of our 10 most important games coming up on this road stretch,” tri-captain Jake Horton said. “After this weekend, there are definitely some things that are going to take some time to correct…. Ready or not, here it comes, so we’re excited for the challenge.”

Colgate has been an ECAC bottom-dweller in recent years, winning fewer than a third of its games in each of the past two seasons. That isn’t stopping Crimson coach Ted Donato ’91 from anticipating a tough matchup in Hamilton, N.Y., on Friday.

“We play a Colgate team that is coming off getting three out of four points on the weekend,” said the bench boss after last Saturday’s victory over Brown. “They’re feeling good about themselves. [And] they’re tough at home…. This will be a good test for us, to be on the road.”

The Crimson’s tilt with the Raiders will test a young forward group’s resolve to get pucks through Point’s pads. Through eight starts this year, the Raiders netminder leads the nation in goals against average (1.05) and save percentage (.965). Plus, Point has finished just one of these games with a denial rate below 95 percent.

Colgate’s lock-down style of play will present new challenges for Harvard, a team accustomed to racking up goals against the opposition. In preparation for the clash of playing styles, the Crimson has focused on getting pucks deep into the offensive zone and earning gritty opportunities down low near the goal.

“Get pucks in behind their [defense],” Horton said. “You’re not going to beat a goalie like [Point] straight up on a shot. It’s going to take second, third, fourth chances to score goals. That’s been the emphasis this week.”

Point’s stellar play early on this season has certainly been impressive, but it would not have been possible without the sound defensive effort in front of him. Manning the back end, junior Willie Brooks and freshman Nick Austin have been taking care of business on both sides of the puck. The rookie leads his team’s blue line in scoring with three goals and two assists, while Brooks looks to improve upon a solid 2016-2017 campaign, which featured a strike against Harvard in the teams’ Jan. 28th meeting.

On the attack, sophomores Bobby McMann (3–4—7) and John Snodgrass (1–5—6), as well as freshman Josh McKechney (0–6—6), comprise the trio of forwards that has carried much of the offensive load through ten games.

Staring 200 feet down the ice at Point on Friday will be Harvard’s own brick wall. Tri-captain Merrick Madsen, fresh off his second shutout in three contests, is trailing Point in goals against average (1.67) by just five spots on the Division-I leaderboard. These two net protectors could easily steal the show and transform Friday’s bout into a goaltender showcase.

Regardless of how the game shakes out, the Crimson will have to ratchet up its intensity for the Big Red the next night. Year in and year out, Harvard players anticipate the matchup at Lynah—a credit to Cornell students for packing the rink and welcoming the Crimson to Ithaca with a heavy dose of Ivy League hostility. 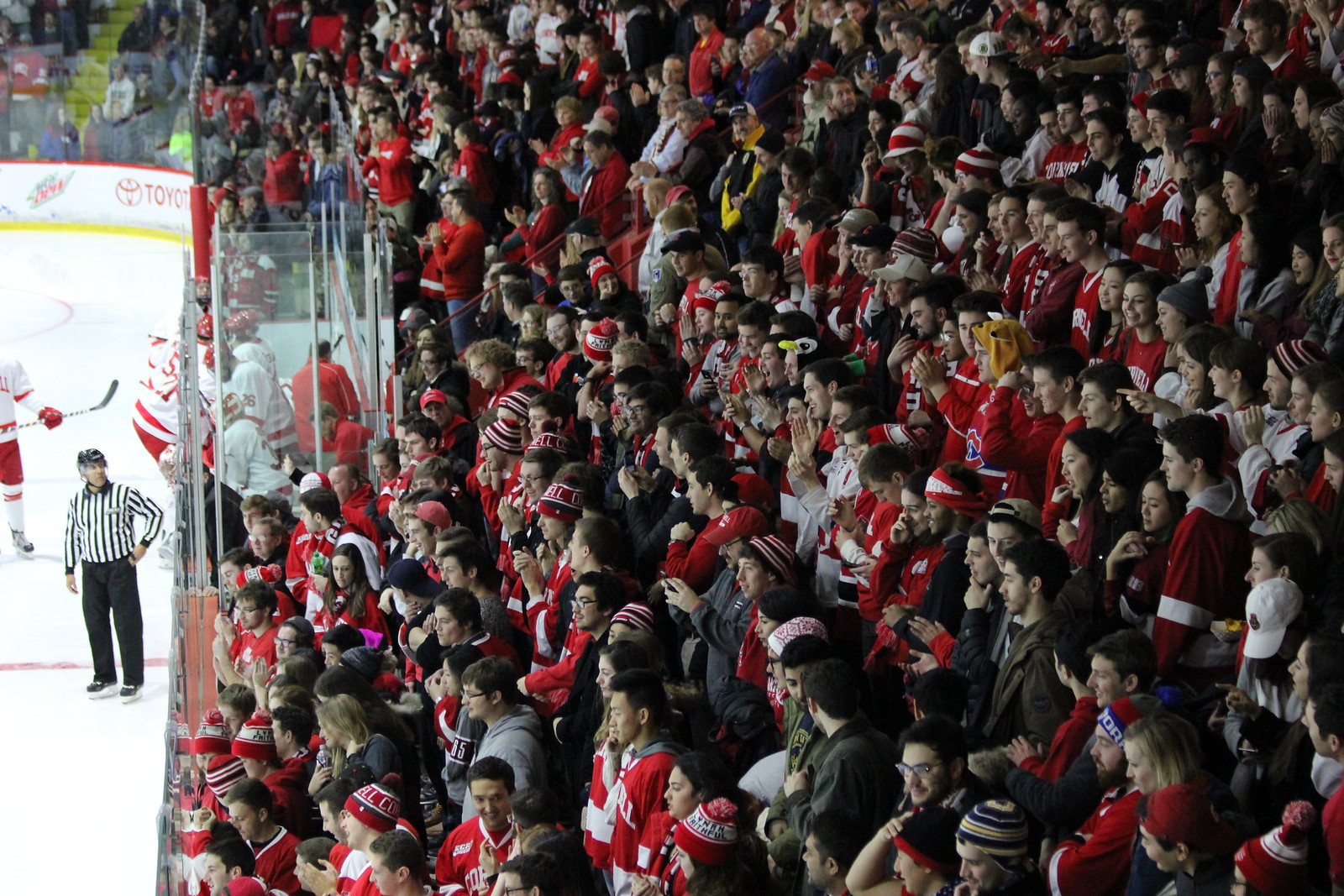 “You get so engaged in the game. That’s what college hockey is,” Horton said reverently. “The band’s going crazy, the chants against you, it’s just a really cool atmosphere to play in…. More than anything, it should just help everybody rise to the occasion.”

Loud, rambunctious, hostile, overwhelming—these are all adequate descriptors of the yearly Harvard-at-Cornell showdown. But perhaps most of all, Saturday’s face-off will be downright…fishy?

In a tradition dating back to 1963, Big Red students assail the Crimson with fish when the team takes the ice before the national anthem. As strange as it is fun, the annual seafood shower is part of what makes the rivalry between these two teams so special.

“[Coach] doesn’t really say much [about it],” Ryan Donato said with a smile. “He just says watch out for the fish. But it’s really cool watching the freshmen see that for their first time.”

With the ruckus completely surrounding the players, staying focused on what transpires within the glass is that much more difficult. Adding to the challenge for Harvard, a handful of freshmen in the lineup will experience Lynah’s fish-flinging, intense atmosphere for the first time.

“We’re going to have to talk to the guys who are a little less experienced or freshmen and say, ‘Hey listen, you have to keep your head within the glass,’” said Donato, a leader of his team’s attacking ranks. “There’s going to be a lot of times where you’re laughing at the crowd…and you can’t really let that distract you from your game.”

Horton’s first experience playing at Cornell left such an impression that he convinced his parents to travel from Oakdale, Minn., just to see Lynah in peak form before he graduates.

“By the time you get to this point in your career, you’ve played in some cool atmospheres—on the world stage, different things like that,” Horton said. “But I remember the first time that I played at Lynah, I was like ‘this is the coolest atmosphere I’ve ever played in, in my life.’ It was to the point where I told my parents, ‘you guys need to come see a game at Cornell before I graduate.’”

Once the puck drops, though, everything happening around the ice is mere background noise.

Barring an unlikely defeat to Dartmouth (2-2-0, 2-1-0) on Friday, the Big Red will enter Saturday’s matchup as the sole remaining unbeaten team in the ECAC. Between Cornell’s on-ice strength and its boisterous home environment, the Crimson will definitely clash with its most challenging foe to date.

Leading the charge for the Big Red up front, senior forward Trevor Yates has notched four goals and two helpers through four games. While the alternate captain sets the club’s scoring pace, Cornell more importantly has benefitted from steady balance throughout its lineup early in the season: nine players have at least three points through the team’s first two weekends of play.

As if the formidable forward corps and craze inside Lynah didn’t present enough of a challenge for Harvard, coach Donato’s squad will have to solve another stellar goalie this weekend.

Despite being yanked from last week’s contest against Princeton after allowing three first-period goals, rookie netminder Matthew Galajda sits among the NCAA top-five in both goals against average (1.51) and save percentage (.938).

A night of stingy goaltending and flying fish will only be made more difficult by the Crimson’s schedule leading up Saturday. The recent win over Brown and Friday’s bout with Colgate cannot possibly prepare Harvard for the roller coaster in Ithaca. The dip in intensity between last week’s Yale matchup and the upcoming Cornell showdown will test the Harvard icemen’s ability to ramp up the emotions for big games. Donato doesn’t seem too worried, however.

“Everybody’s really, really excited for every weekend,” the junior said. “[Emotional intensity] won’t really be an issue. Especially against Cornell, their crowd is unbelievable and it’s really hard to not be in the game there because it’s honestly one of the best atmospheres in college hockey.”