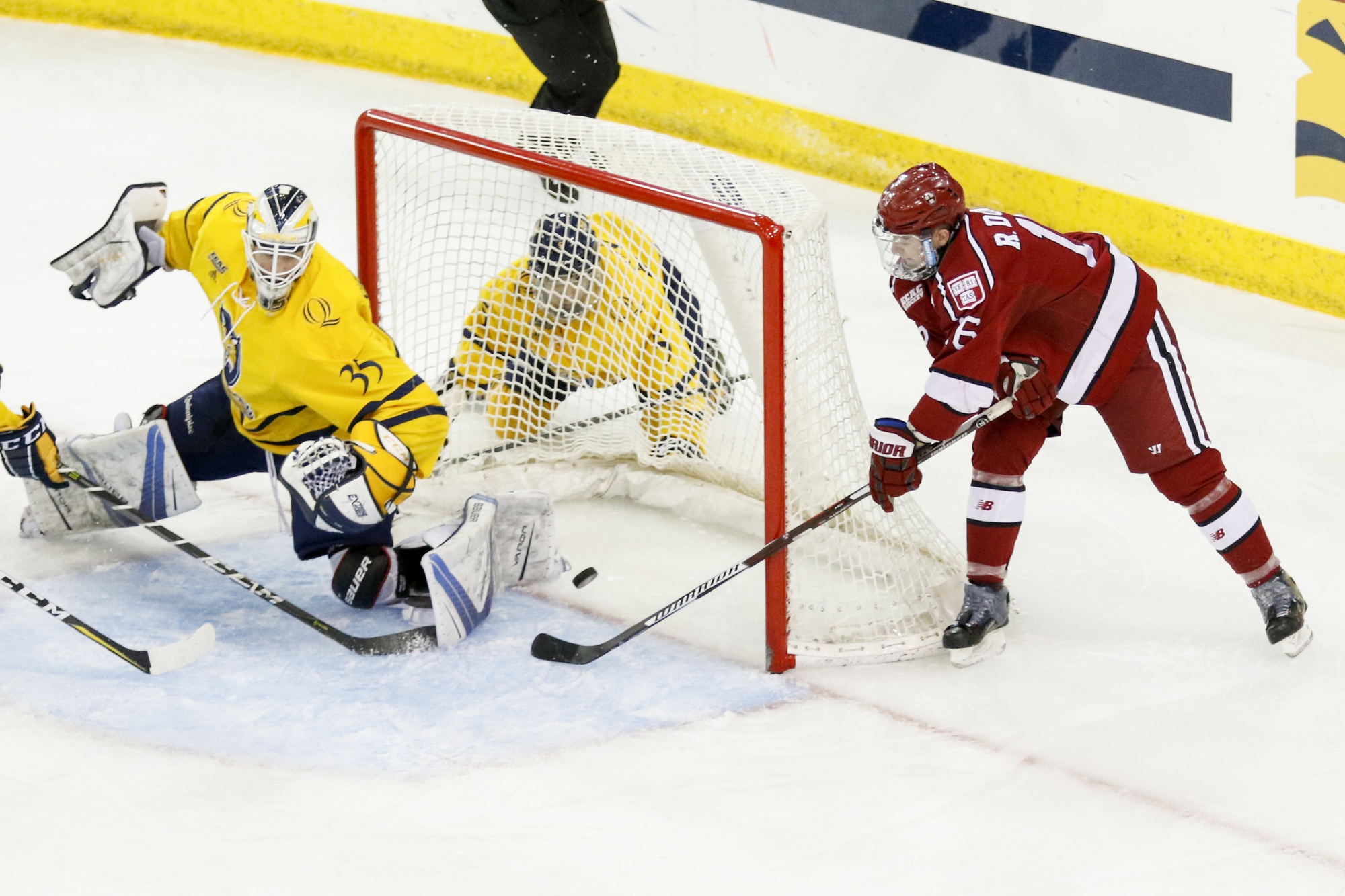 HAMDEN, Conn. — A reeling Harvard men’s hockey team made some promising strides over Thanksgiving break against Boston College. At some point, however, these improvements are futile if the wins don’t start coming.

After a 2-5-1 start to the season, the Crimson (3-5-1, 3-3-0 ECAC) battled Quinnipiac (6-8-1, 3-5-0) in dire need of a win—nothing more, nothing less, just the two conference points. And a victory is exactly what Harvard earned on Friday night, as the visiting Crimson edged a physical and relentless Bobcats team, 6-2. Harvard picks up its first tick in the win column since a November 4th shutout against Brown.

“It’s something to build on,” Crimson coach Ted Donato ’91 said. “We found out that if we can make some simple smart plays, we’ll still be able to have some good offensive chances…. Good win for us, and it’s much needed.”

While the score would indicate a lopsided affair, two of Harvard’s goals came in the final minute when the game was all but decided. Quinnipiac actually paced the two teams in offensive chances, significantly outshooting the Crimson, 43-30.

A two-goal disparity held for much of the contest after the visitors jumped out to a 3-1 first-period lead, with both teams adding a goal early in the third period. 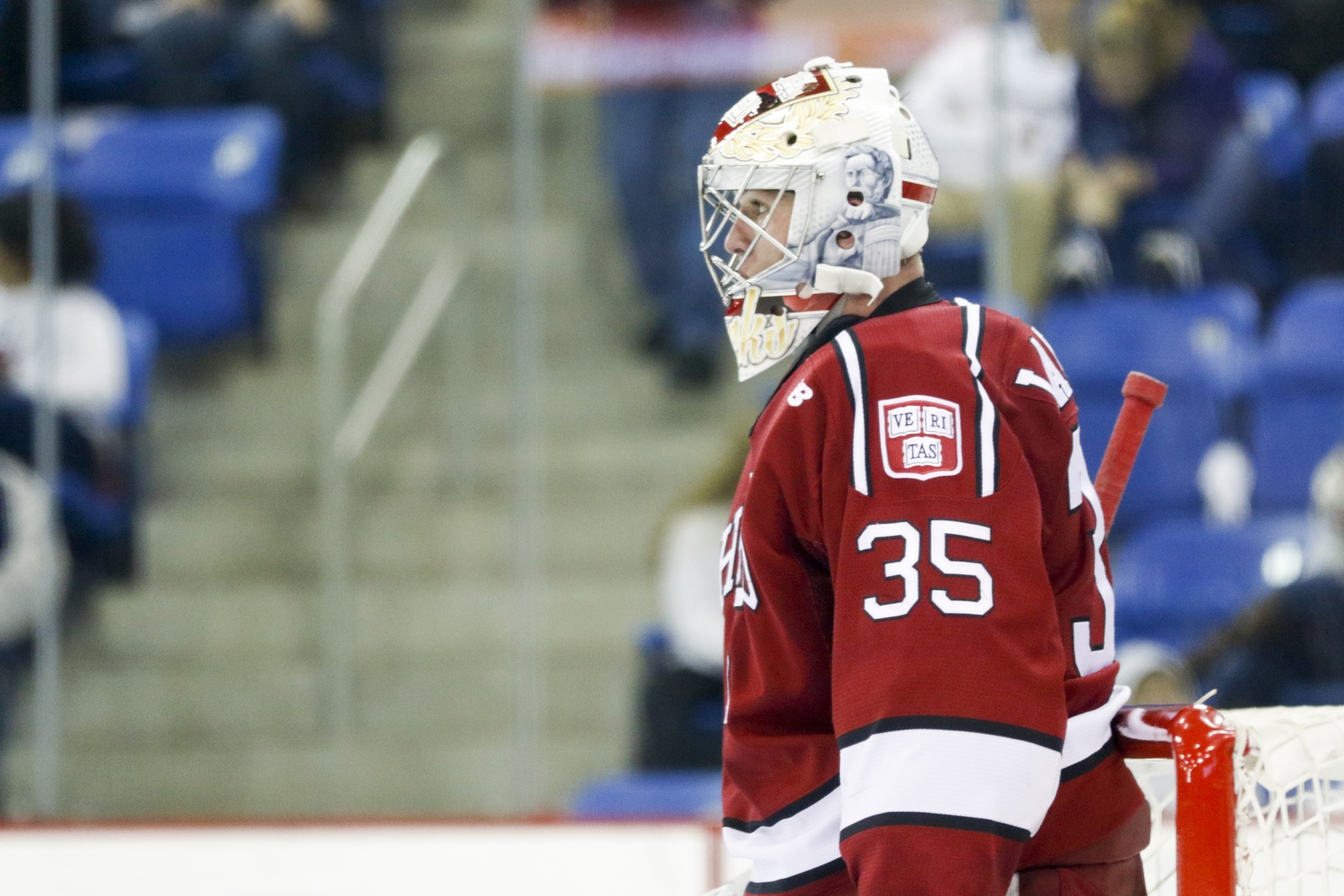 Junior goaltender Michael Lackey made his season debut in a surprise move by coach Ted Donato '91, who benched tri-captain Merrick Madsen in promoting Lackey. Look for Harvard to ride the solid play of Lackey for the time being. By Timothy R. O'Meara

The contest began with some uncertainty, as fans saw a new starter in Harvard’s net for the first time in almost two years. Coach Donato opted to start junior Michael Lackey instead of tri-captain Merrick Madsen, Harvard’s usual number-one backstop. Because Madsen started all 36 games for the Crimson last season, the change between the pipes ended a 55-game start streak for the senior.

“We thought that we deserved to give somebody a chance to play,” coach Donato said. “We wanted more competition…. We’re at a spot now where we’re still trying to form our identity as a team, and guys that go in and play the best are going to be rewarded with playing time.”

The uncertainty did not stop there, though. Lackey, who sat out last season due to a hip injury, was playing his first minutes of the season on Friday night. He hardly had time to settle in before a puck found its way past him.

Just four minutes into the contest, Quinnipiac forward Matt Forchuk came up with the puck at the corner to Lackey’s right. The freshman threw the puck toward the cage, where linemate Nick Jermain got a stick on it and redirected it to the back of the net.

“That was a tip in the top corner, so I didn’t really fret that much about it,” Lackey said. “The adrenaline was pumping a lot at the beginning…. Once I settled down and started making some saves, I calmed down a little bit and just focused on the next shot.”

Despite his apparent shakiness in the first five minutes, Lackey settled in and played a stellar game in the paint. 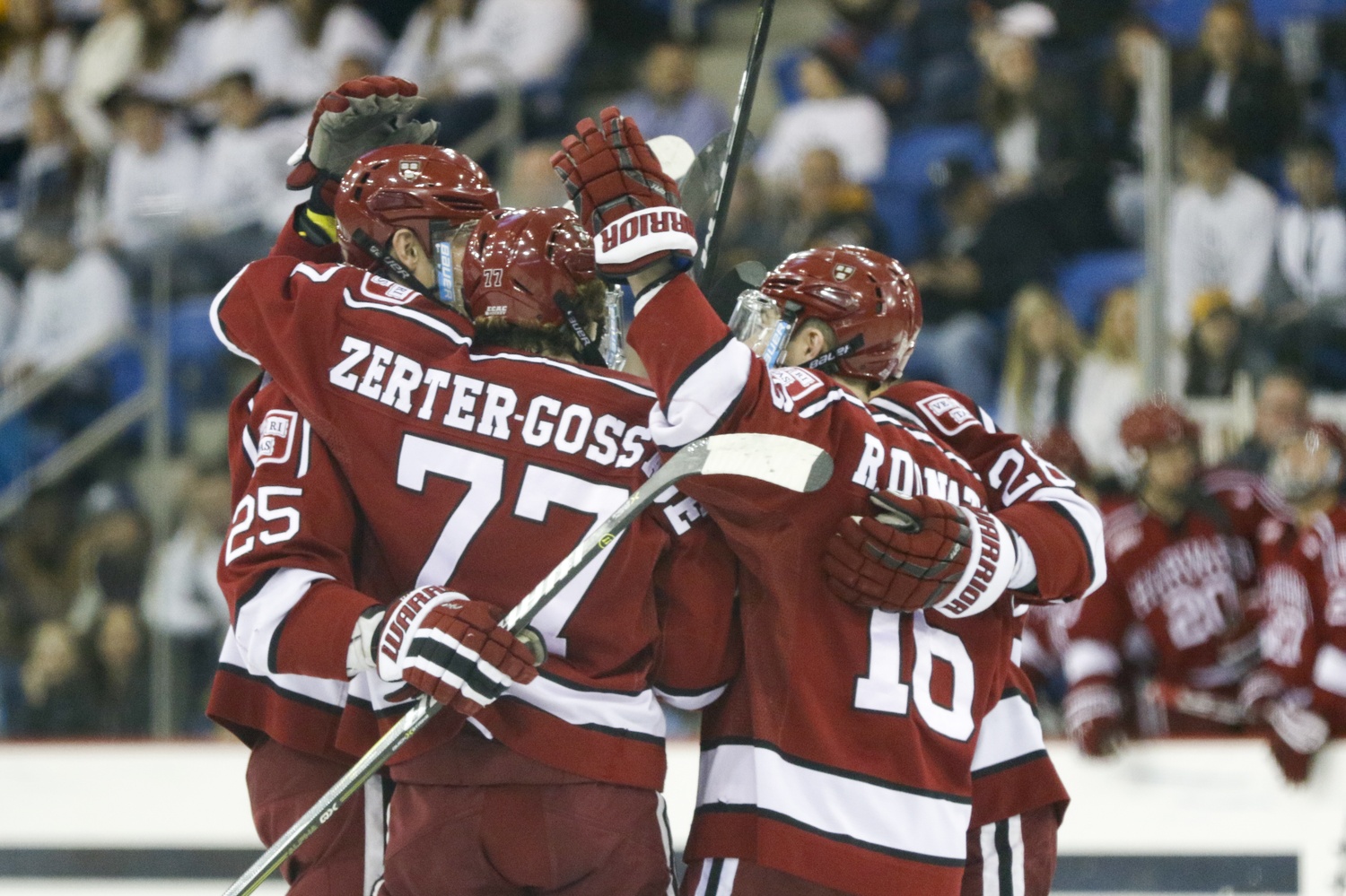 The team celebrates its first goal of the evening as senior blue-liner Wiley Sherman finds nets a slapshot from the point. The strike was the first of three opening-period tallies for the Crimson. By Timothy R. O'Meara

“Obviously it was his first game back in a long time, and I couldn’t be happier for him,” junior forward Ryan Donato said. “At the end of the day it’s a long hockey game, and obviously its tough seeing [the goal] go in early, but he kind of battled back and stayed composed.”

Harvard responded with two goals before the first half of the period was over and chipped in another with just three minutes remaining in the frame.

To open the scoring for the Crimson, senior blue-liner Wiley Sherman fired a rocket from the point, which made it through Donato and a few Bobcat defensemen before finding twine.

Just two minutes after Sherman’s first of the year, Donato took advantage of a fortuitous puck that remained playable low in the zone thanks to the skate of a referee. From behind the goal line, the center drove hard to the net and punched one past sophomore goaltender Andrew Shortridge.

By potting a goal in the opening frame of his hat trick performance, Donato extended his season-long point streak to nine games, during which stretch he has recorded seven goals and six assists. The Boston Bruins draft pick added another goal mid-way through the third period on a wrap-around before completing the hat trick on an empty-netter.

Seven minutes later, junior forward Lewis Zerter-Gossage padded the Harvard lead on snipe to the top-right corner. The winger faked a slap shot in the high slot before skating in and firing the bullet. 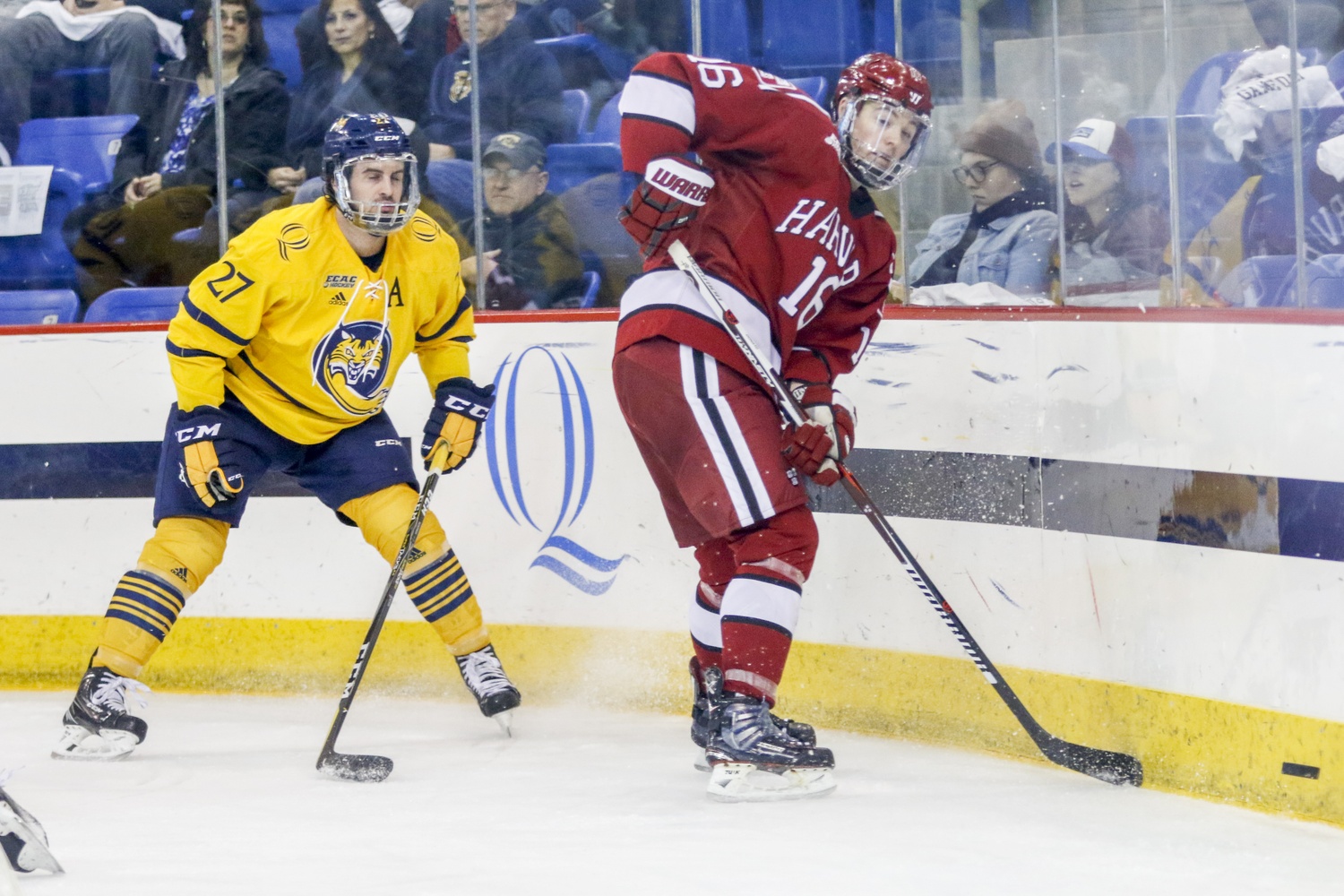 Junior forward Ryan Donato did much of his damage down low on Friday night. On the Crimson's first goal, Donato served as a screen in front of the net, and then he added two goals of his own from in close. By potting the first of those two pucks, the center extended his point streak to nine games. By Timothy R. O'Meara

“We were trailing to start, but we kept making right decisions with the puck,” coach Donato said. “We didn’t make trouble for ourselves. Quinnipiac is talented enough, they’re going to make trouble for us.”

Allowing three first-period goals was somewhat uncharacteristic of Shortridge, who entered the ECAC showdown with an impressive .924 save percentage and 1.89 goals against average—his numbers are even better, albeit marginally, in the first period.

While the score remained intact in the second frame, each side continued to earn high-quality scoring chances, and the physicality continued. A series of big collisions escalated the action in the scoreless period.

Tri-captain Jake Horton ended multiple shifts visibly upset at the referees’ lax style. Through two periods, no penalties had been called on either team.

“[Jake Horton] looks like a Civil War hero in [the locker room],” coach Donato said. “He’s got cuts all over his forehead…. I didn’t find it to be an overly dirty game. Both teams were playing hard, finishing their checks, and there [weren’t] many penalties in the game.”

Mere seconds into the third frame, the officials finally booked the first penalty of the night by sending off senior forward Tanner MacMaster for roughing. The chippy play only continued, however, as a scuffle between Lackey and a Bobcat forward trailing the play warranted intervention from the referees and jeers from the fans. 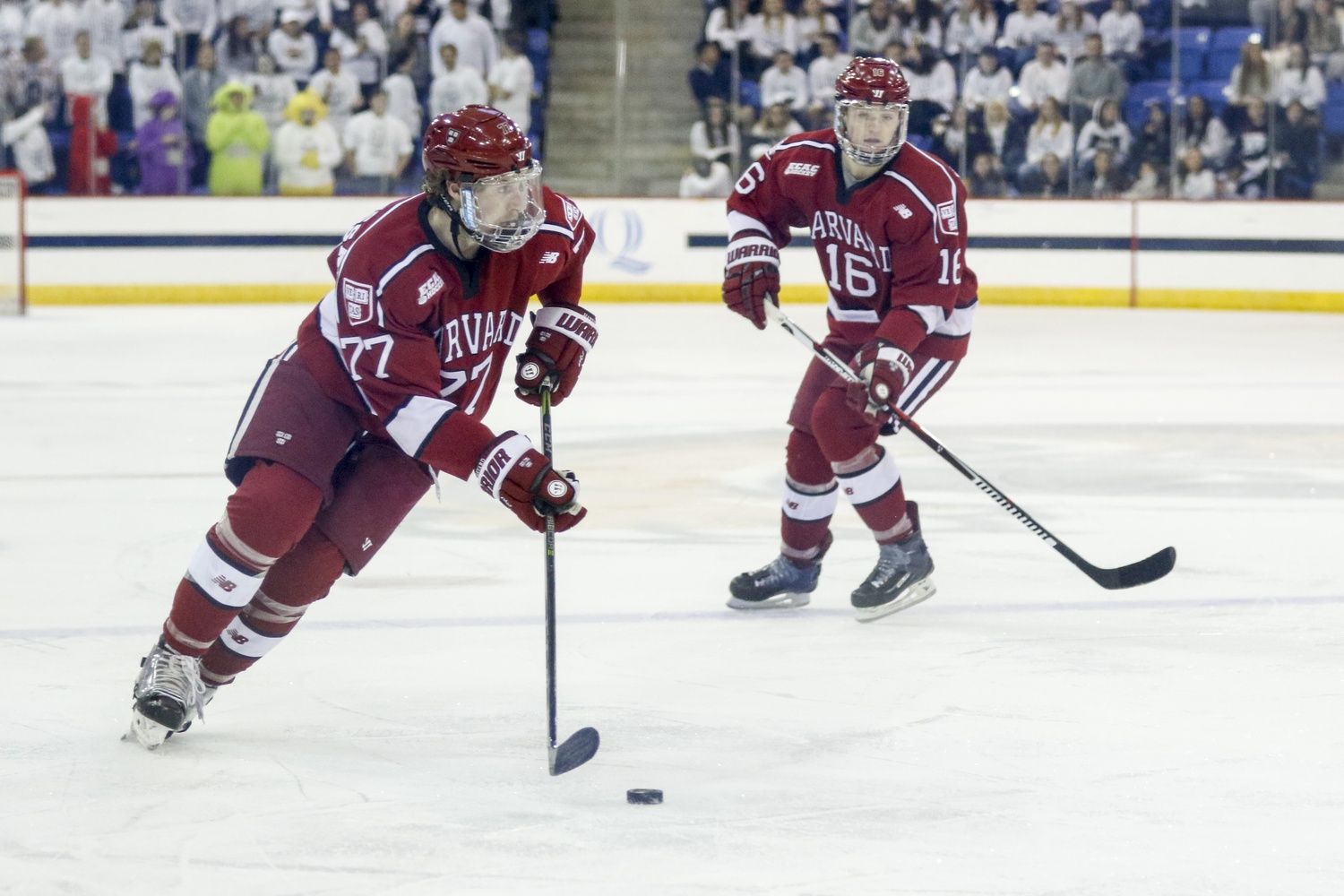 The Crimson now finds itself trying to build a winning streak—a surprisingly unfamiliar position for the squad this season—and will take on Princeton on Saturday night in search of its first four-point weekend of the 2017-2018 campaign.

“It stinks that we had to take so long to get back into our winning routine, but it feels really good,” Ryan Donato said.