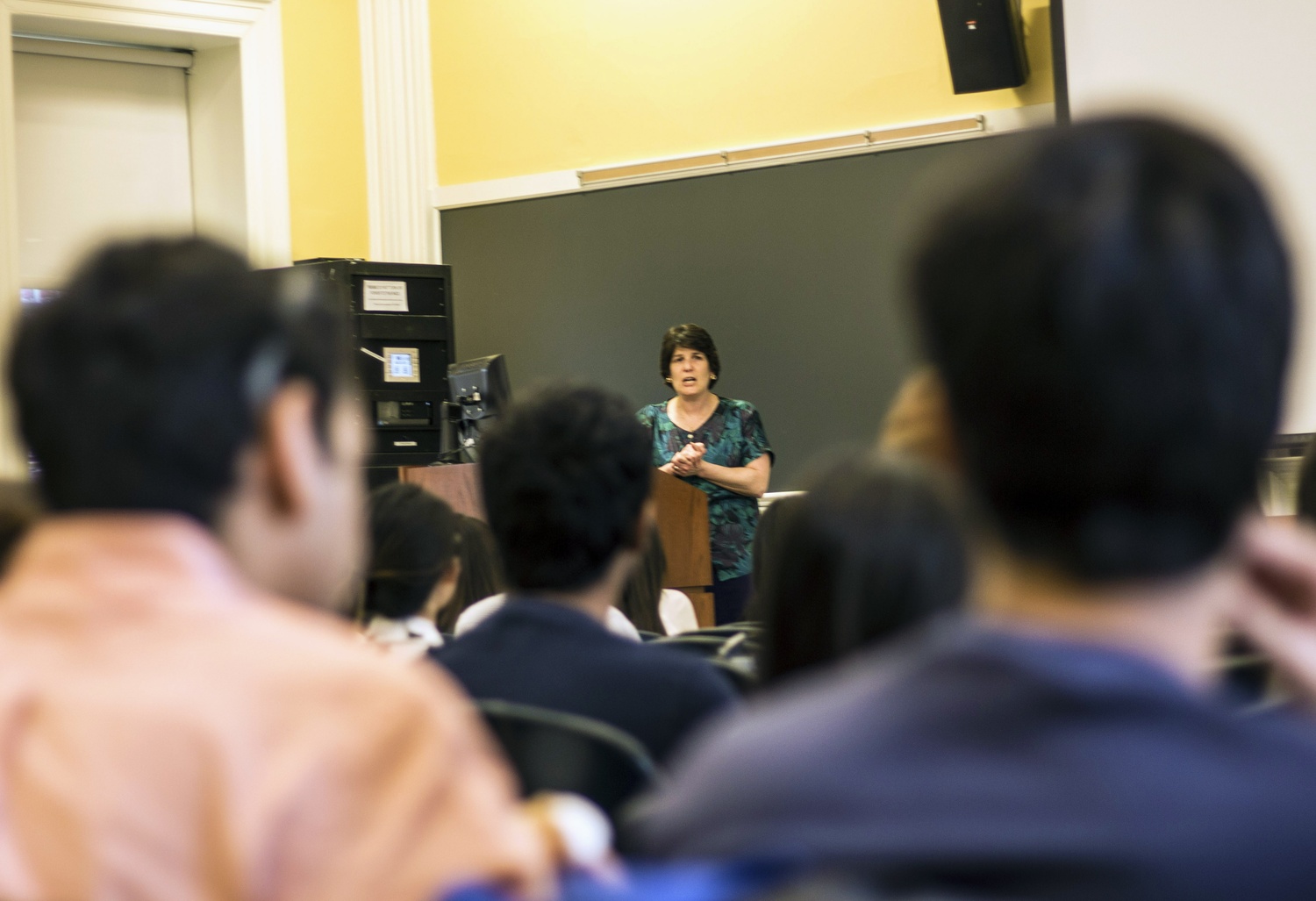 Margo I. Seltzer '83, computer science professor, speaks about the gender gap in computer science at the event 'Breaking the Silicon Ceiling' in 2016. Seltzer will leave Harvard to join the faculty of the University of British Columbia next year. By Helen Y. Wu
By Luke W. Xu, Crimson Staff Writer

Margo I. Seltzer ’83, a longtime Computer Science professor and the second woman in Harvard history to hold the position, will depart Cambridge to join the faculty of the University of British Columbia after this academic year.

The University of British Columbia announced Wednesday that Seltzer will join its Computer Science department as part of the Canadian government’s Canada 150 Research Chairs Program. Debuted earlier this year, the federal program—worth 117.6 million in Canadian dollars—is a hiring initiative “designed to attract the world’s most talented researchers and scholars” to Canada, according to its website.

Seltzer, along with three other professors, comprises part of the program’s first wave of research chairs. She will receive one million in Canadian dollars annually in federal funding when she assumes her new position.

Seltzer wrote in an emailed statement Thursday that she plans to start a “Computer Systems Library” at the University of British Columbia and that she hopes to get her lab “off the ground” quickly.

“The Canada 150 Research Chair is an incredible opportunity,” she wrote. “It speaks volumes to Canada’s commitment to science, research, and higher education.”

“We are thrilled to welcome Margo to UBC and for the potential her recruitment offers for student learning, research and entrepreneurship opportunities in computer science at UBC and in Canada,” Ono said in the release.

Seltzer has taught at Harvard since 1992. In 2000, she became the one of the first female junior faculty members at Harvard to receive internal tenure in Computer Science.

She is currently one of six tenured female professors in a Computer Science department with over 20 total tenured faculty members. Her departure comes at a time when Harvard faces increased scrutiny from some professors over issues of retention among female faculty, especially in the School of Engineering and Applied Sciences.

Citing the work of her colleague Radhika Nagpal, who prepared an internal report on the retention rate for female faculty in the University’s science, engineering, and mathematics departments, Seltzer wrote she hopes the administration will make improvements in this area.

"My colleague Radhika Nagpal has been working tirelessly these past few years documenting the state of affairs in science," she wrote. "I look forward to the administration investing similar effort to make Harvard a leader in the recruitment and retention of female and other under-represented faculty."

Earlier this year, a number of students launched an online campaign to promote Seltzer as a presidential candidate in the ongoing search for the successor to University President Drew G. Faust, who will step down in June 2018. Students circulated a Google document called “Why Margo,” which listed a variety of reasons—like teaching experience, academic prowess, and “championing” of women in science—that they felt rendered Seltzer a qualified candidate.

Seltzer’s research broadly focuses on computer systems and user interaction. She wrote Thursday that she looks forward to starting her work in Canada and that she is excited to join her colleagues in the 150 Research Chairs program.